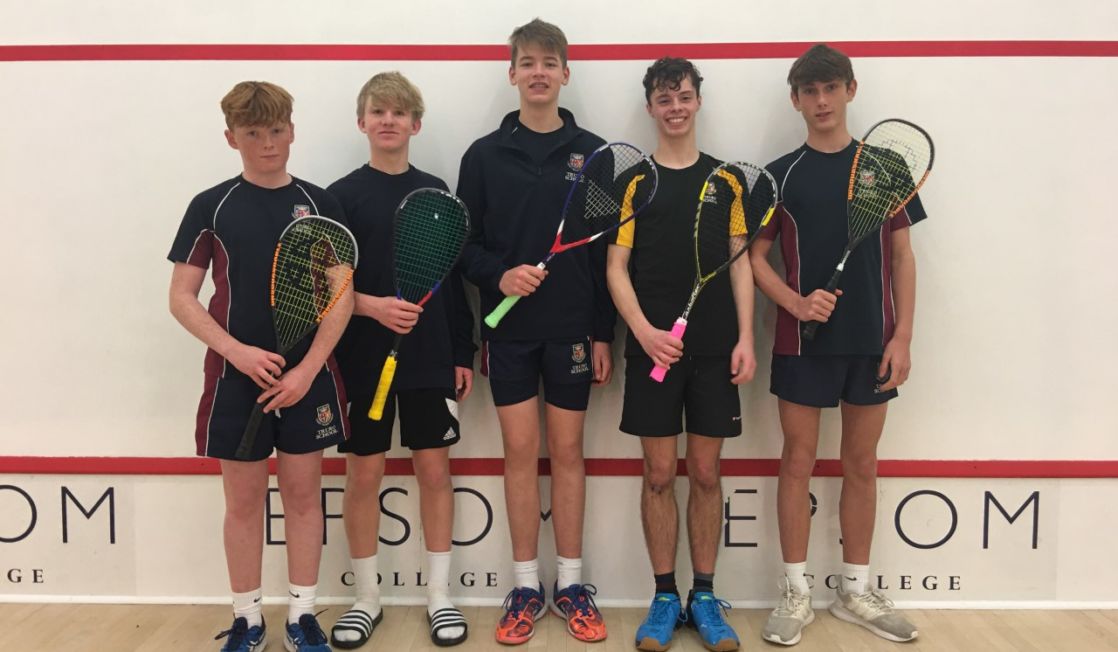 On Wednesday 20 November Key Stage 5 boys travelled all the way to Epsom to play a first round fixture against Reeds and Epsom schools. Without Jack Mahon and Ollie Beaumont, the team was able to call upon the very able duo of Ed Hayes and Finlay Charles to play in their stead and help regulars Louis Murray, Ben Thorpe and Joe Thomson.

Brimming with talent, energy and enthusiasm, Truro School made the long trip with great anticipation in order to ‘get the job done’.

After a 7.30am departure the team arrived at Epsom at around 1.45pm ready for a good warm-up and then a hard first tie against Reeds.

On his debut, Finlay put in a fine athletic effort and only just lost out in a solid first experience of the National champs.

Ed took a strong and very impressive 3/0 win on the other court, and Joe Thomson likewise came through 2/1 and comfortable in his win. Louis was way too strong for his opponent and sliced through him in double quick time leaving Ben to finish proceedings with a very tight 2/1 victory eventually gained on sudden-death match ball!

In the Epsom game, Finlay played a very good opponent, but fought in every rally and scored vital points for the team. Ed was up against an opponent four years elder to him, and although Ed was more accurate, he just lost out to the power hitting of the Epsom boy.

Mr Sanderson said: ‘For me, the three best matches of the day unfolded with Ben Thorpe going to a sudden-death match ball again and not quite clinching his win on this occasion against a younger, but England level player.

‘Joe then gave his best performance of the season to date and smashed his challenger everywhere to win 3/0 in great fashion and Louis was simply superb yet again in dismantling another highly-ranked England junior 3/0 in the top match.

Well done to all the team on smooth qualification to the next round and a credible chance of making the grand finals in March’.