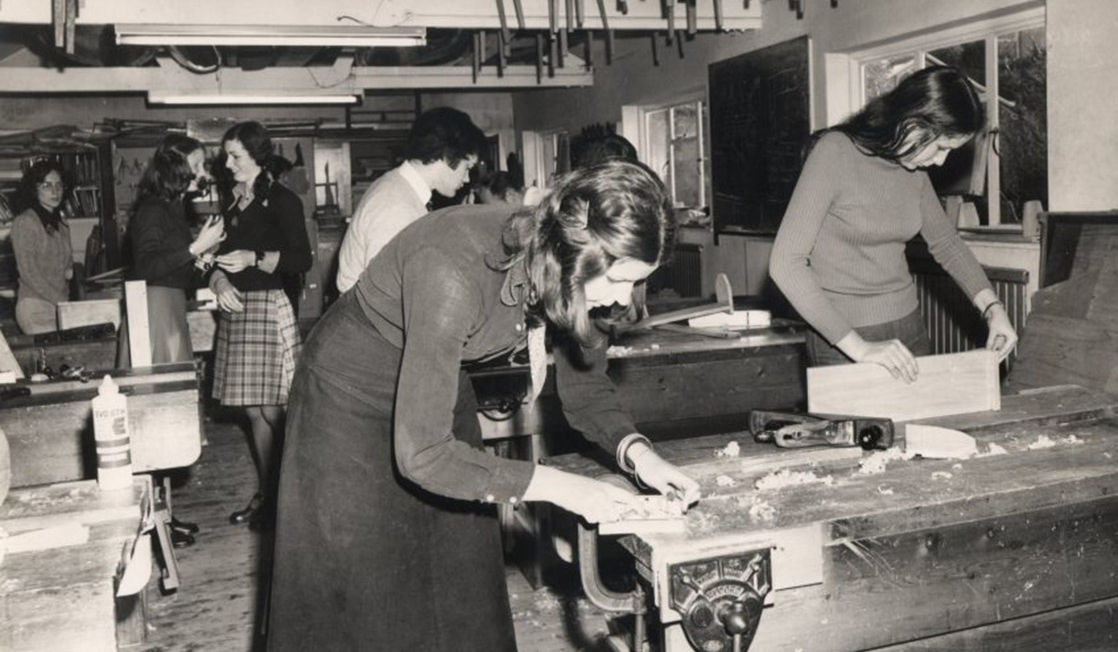 Woodwork, CDT, Design Technology, Design and Realisation, Resistant Materials, and Product Design, all of these labels, timetable names, exam syllabuses/specifications and qualifications have at some stage in my time at Truro School been relevant to what went on in the School’s workshops, wherever they were at the time.

I suppose a bit of a timeline at this stage might help clarify things a little, as really I can only write about my experiences, first-hand both as a pupil and then later, and for much longer, as a teacher who delivered the subject that has now evolved into DT.

Well, my journey through what started as Boys Handicrafts, ie woodwork and later, for me, metalwork, began back in 1966, when at the tender age of 12, and joining the 2nd Year, I had my first taste of woodwork with the then head of the department Dennis Keam, who to all accounts was a one-man-band in terms of delivering the subject.

For some reason then, we got half a year of woodwork and half a year of art on our timetable, but that did not commence until we were in the 2nd Year. I never really knew or asked why we were not able to do that from the 1st Year but Truro School has always had its little idiosyncrasies, as we all well know.

Anyway, back then the woodwork room was a single storey room, which is now the outer part of the Sixth Form Centre, and linked to it, and down a few steps, was the space that later became the metalwork room in 1968, with the arrival of Roger Shore. By the standards of the day it was fairly well set out, with excellent workbenches, a good selection of hand tools, all of which were carefully stored/displayed, and importantly, kept sharp and in good working order. There was a solid Union Graduate woodturning lathe, that remains in service to this day, a modestly sized band saw, and an oil-cooled tool grinder, that similarly is still in use.

The timber store had a small circular saw. There were no portable power tools that I can remember at that time. The space itself, however, was at best modest and could feel quite cramped when in use by older pupils working on larger projects. Certainly storing work in progress was an issue, and the open beams and rafters above the room had been put to use to rack table frames and the like.

On one occasion a pupil was getting his coffee table frame down when his grip slipped and the table came down with a bang onto the bench below. Now, this ordinarily would have been no big deal you would think, but tragically on that very bench was a nearly completed Spanish acoustic guitar that had been lovingly created by John Coleman, the son of the then school chaplain. The trauma plainly did not affect him too much, as, like myself, he went on to train and became a woodwork/DT teacher himself.

So what did we get taught and what did we learn then? Well, the ethos of the O-Level and A-Level qualifications was squarely, no pun intended, focused on hand skills and accuracy, with the holy grail being the ability to mark out, hand-cut and fit together as many woodworking joints as possible. Whilst this produced people with considerable hand skills, you could have levelled the accusation that it really did not necessarily provide them with skills that were applicable in the workplace, unless you went off to be a craft teacher.