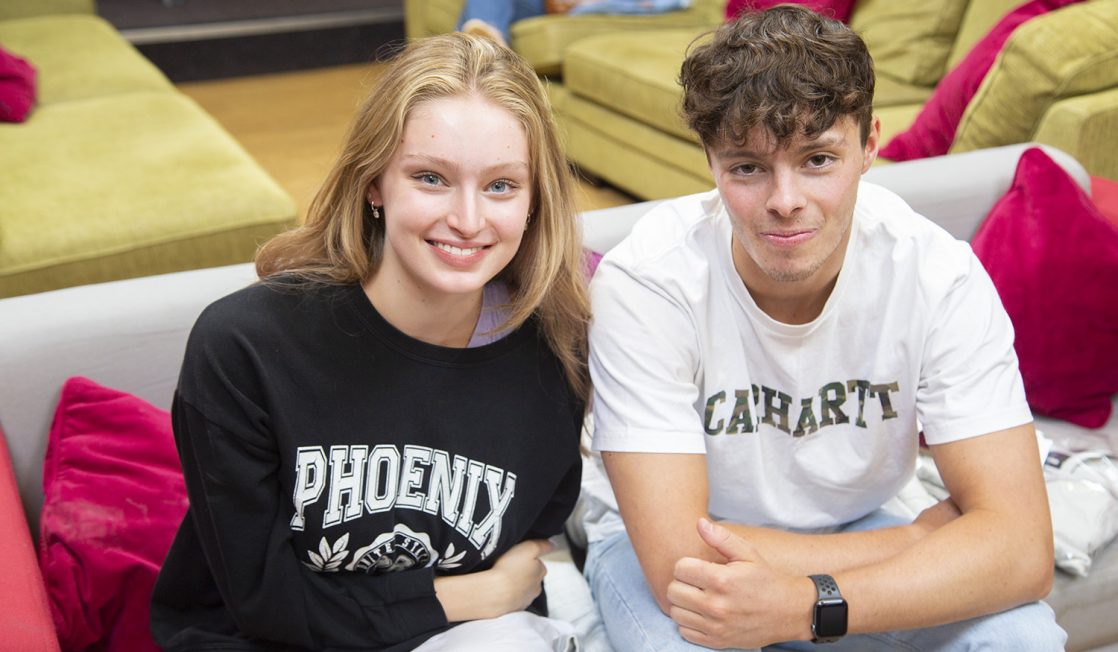 With 40% of our Students achieving straight A/A*s (and 63% of all grades at A or A* in total), we managed to catch up with a few of our Upper Sixth to share their successes and to find out more about their time here at Truro School Sixth and their next steps.

George P was extremely calm and collected, despite his stunning 3 A*s in Maths, Economics and Geology. When asked how he felt, he told us, “I’m feeling quite good funnily enough. Mum started crying and she hugged me, it was quite emotional!”

Despite being in the first post-Covid cohort to sit A-Levels again, George explained, “I didn’t feel that much pressure sitting actual exams. I had seen my brother go through the Covid A-Levels so I was glad to be able to get mine done. I just did the work and I did quite well.”

George’s grades were higher than predicted and so he is currently working with the Head of Careers, Mrs Nancy Kenward to go through clearing. He tells us, “I’m hopefully going to go to uni, but I’m not sure it will be this year. I didn’t get the offers I wanted earlier this year, but now, with these results, Mrs Kenward is going to help me to see if I can get my first choice. I want to study Economics. I have no idea of the big dream, but Economics is such an open course, it gives me a lot of options.”

When asked about his choice of Truro School for Sixth Form, George explains, “when I was deciding between here and other options, I knew I would do better here because of the smaller classes, better facilities and resources. The Geology department is amazing and with Economics, Mr Whatley (Head of Economics and Business) is by far the best teacher I have ever had.”

We look forward to hearing more about George’s future plans but do not doubt that his level-headedness and drive will take him on to further great heights.

Katie F completed a full CTEC Extended Certificate in Sport & Physical Activity, which is equivalent to 3 A-Levels. It aims to provide students with the chance to develop their skills in coaching and sports science in many key areas in Physical Education. Katie did phenomenally well, achieving a Triple Distinction in the Award, the highest possible grade, despite telling us that she was worried about missing out on getting a single distinction.

“I was the only one in my year doing the full CTEC, but I got loads of support from my teachers and managed to complete it.”  When asked whether she would recommend the course to others, Katie replied, “I would definitely recommend it. As a course, it is under-valued and not that well known. But it is a great option, especially if you’re not an exam person like me. The CTEC offers a good range of topics and I enjoyed the practical sessions. The course offers a good balance between the practical and the theory, which I liked. You might not get that blend with some traditional A-Levels.”

With her certificate in hand and top marks, Katie is now ready for the next phase in her educational journey, a 3-Year PGCE at Marjon. The course was recommended to her by several of our Truro School teachers who had first-hand experience and Katie is excited to get started in September.

“I did wonder if I needed something new for Sixth Form, but Truro School Sixth gives you a place to push yourself and discover new things. I would definitely recommend it; it feels safe enough so that you can try and also try and fail sometimes, which is important. Here, you have a support system in place to get you back on the right path and allow you to really push yourself to new levels. I’m now off to UCL to read German and Spanish. I wouldn’t have considered London had it not been for Mrs Quaife. She has been my only German teacher throughout my School years and has been incredibly kind and nurturing. She went to UCL and pushed me to visit it and I loved it, so I’m excited to start.”

Despite being predicted the 4 A*s he achieved, Ben didn’t feel that this added more pressure to his A-Levels. He is now going to Bristol to study Politics and Spanish. For him too, it has been the teaching staff at Truro School Sixth that made it such a brilliant choice, “Dr Spring, Mr Pilborough, Mrs Jupp, Mrs Quaife and Mrs Duke… they are all fantastic teachers. I remember Dr Spring doing a weekend clinic for us to cover history topics we had done in the Lower Sixth. It was all day for two days to get us refreshed. I mean, that really is going above and beyond in terms of teaching support.”

With 2A*s and 2 As under his belt in Maths, Physics, Further Maths and Chemistry, Ed A was another student celebrating fantastic results today, “all of my teachers have been amazing at helping me get through my exams and I’ve also had a great group of friends here. It was strange doing A-Levels (after Covid), but the mocks we took ahead of the actual exams helped us to prepare for the pressure of the actual ones.” With fantastic results achieved, Ed is now off to Warwick University to read Maths this September.

We also managed to catch Deputy Head Girl, Lulu who was “very relieved” after achieving 2 A*s, an A and a B in Maths, Computer Science, Psychology and Further Maths. She is now off to Durham University to study Computer Science. “After university, I would like to go into software engineering. I think that will be exciting because it is such a fast-moving industry.”

When asked about her time here at Truro School Sixth, Lulu tells us, “the last two years have been the happiest of my life so far with the group of friends I had made. Mr Kitto is one of my standout teachers, as is Mrs Lobb, Mr Vanstone and all of the Maths and Psychology departments.”

Jack P, who had been at Truro School from Prep through to GCSEs, returned to Truro School Sixth after a stalled start in another setting. Jack’s Dad tells us, “when he came back [to Truro School], it was like a switch had been flipped, and he turned back into the academic he was before. The School offered him support with processes and systems, and the culture here has enabled him to achieve his results (A*, A* and A). His next steps are going to study Geology at Cardiff University where he hopes to discover a new rock type!

The morning proved to be an emotional one for Sophie W; her fantastic 3 A’s have granted her the chance to fulfil her first choice of studying Bio-Chemistry at Imperial College London. Ollie N agrees, “this morning has been good, but a weird one. I’ve got a lot to process, so I’m going to take a gap year this year to consider what I would like to do, possibly Product Design at Loughborough.”

Reflecting on the last few years, Ollie says, “it has been a bit of a rollercoaster but, overall, Truro School Sixth Form has been a very positive and happy experience. I have a lot of core memories that I will remember for the rest of my life. I’d like to thank loads of my teachers; Mr Baker, Mr Shardlow, all of the Maths Teachers, Mrs Duke and Mr Laity.”

Cam was another student with a clutch of A*s, having achieved an impressive 3A*s and a B in Economics, Drama, Chemistry and an Extended Project Qualification (EPQ), a standalone qualification taken in addition to A-Levels that helps students to develop and demonstrate skills in project management, research and presentation, amongst others.

“It’s crazy, it just doesn’t feel real at the moment,” Cam told us. “Coming out of the exams, I wasn’t confident that I’d done well. Maybe that was a lack of self-confidence, but today is just crazy.”

Cam joined Truro School in Year 7 and it was the teaching staff that persuaded him to stay on for Sixth Form. “The teachers here are incredible. Especially at A-Level and especially for Chemistry and Economics. The team of Dr Brogden, Mr Gustafsson is crazy good and Mr Whatley too. I just wouldn’t be here without them”.

George S, sat alongside Cam, was also celebrating a whopping 4 A*s in Religious Studies, English, Music and an EPQ, despite not being confident that he would have achieved such brilliant results. He is now off to St Andrews to read Theology and hopefully to play plenty of golf!

Academically it is great and I owe a lot to the library here and the library team who made me feel so settled and supported. There is no pressure or intensity here at Truro School Sixth that makes you feel alienated; it just makes you better. I just really enjoyed every minute of my time here.”

Although we only managed to catch up with a few of our students, it was a truly moving morning, and all of the Staff are very proud of every one of our Sixth Formers. We know that whatever the future holds for them, it will undoubtedly be a bright one.

For a breakdown of the results in full, please see Sixth Form Success Continues – Truro School 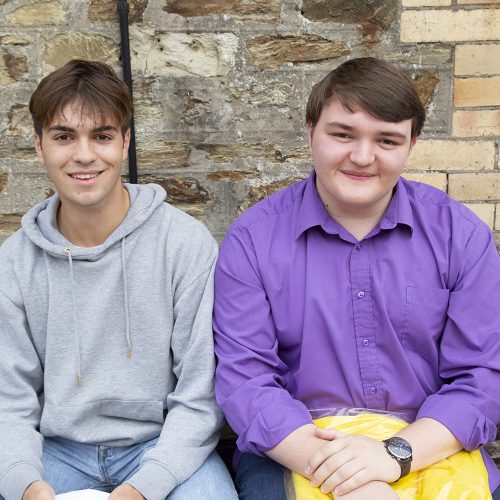 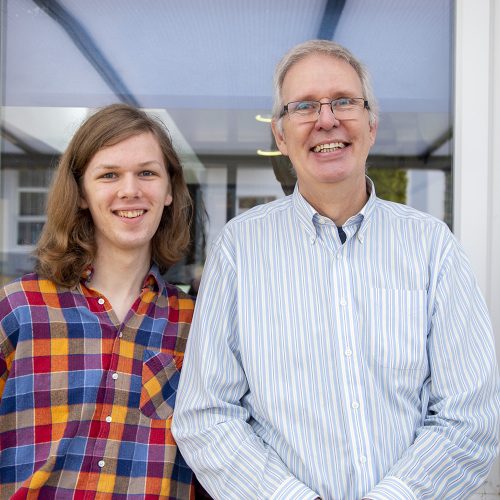 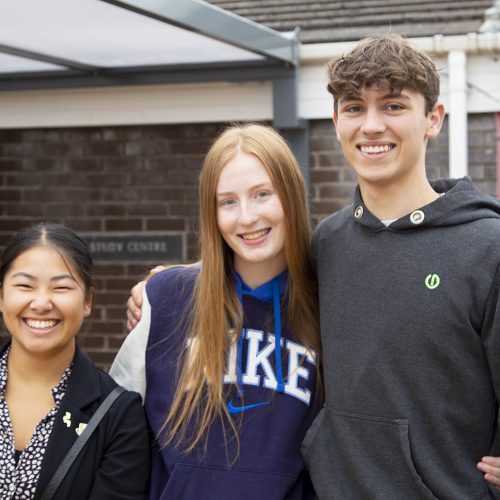 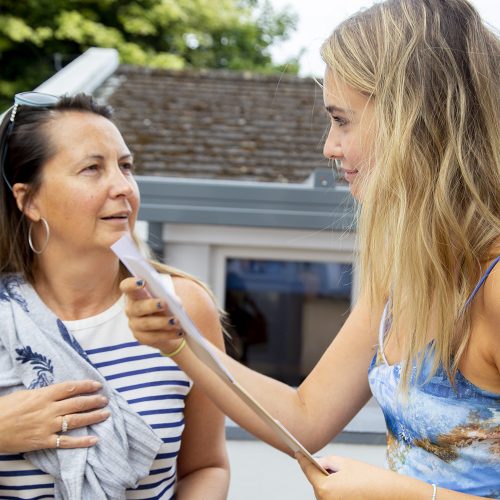 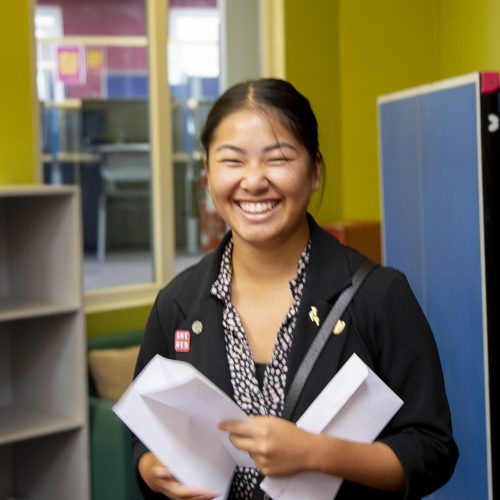 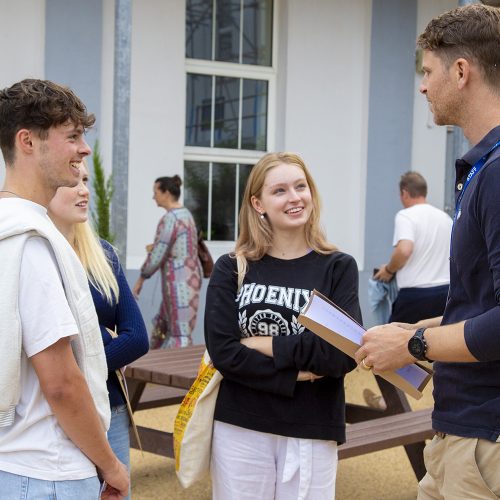