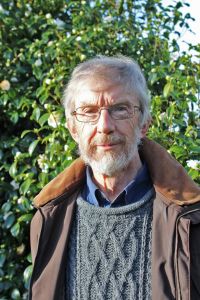 Jim Clark taught chemistry at Truro School between 1974-1997, latterly becoming Head of Department. Although Jim retired from teaching in 1997, he has continued to be a source of inspiration and help for students not only in the UK but all over the world, writing several chemistry textbooks and via his website: Chemguide.

Chemguide is designed as a tool to assist 16–18-year-old chemistry students and is estimated to be used by almost every A-Level chemistry student in the UK, with around 1.4 million visits a month worldwide.

In this article, Jim tells us how his idea for Chemguide grew because of the one-to-one teaching support sessions he gave to A-Level students at Truro School.

I was asked if I would like to write a ‘potted history’, so here it is. I was born, brought up and went to school in Falmouth, went to Cambridge followed by teacher training, and then taught chemistry at several schools before ending up in Truro in 1974. There is nothing remotely interesting in any of this, and it feels a little like writing my own obituary. So, I’m going to give you some snippets of life in the chemistry department at that time instead.

Chemistry is a practical subject.

At school level, chemistry is, above anything else, a practical subject and a potentially dangerous practical subject at that. Only a handful of students starting at the age of 11 will go on to read chemistry at university. More will need chemistry for medicine or biology, but the majority will forget all the chemistry they ever knew soon after leaving. What they will be left with are practical skills in handling fragile equipment and potentially dangerous materials including household things like bleach, oven cleaner, paint stripper and weedkiller.

So, you start at the beginning of the first year with students who may never have been allowed to do anything remotely dangerous at home and teach them over a very short time how to handle fragile equipment and potentially harmful situations safely and confidently. You can’t do this with demonstrations – it must be hands-on.

At one stage our excellent lab technician, Pete Seymour (still a lab technician at Truro School), decided he was bored with his white lab coat and tie-dyed it a sort of green-blue colour (I hesitate here, because my wife and I rarely agree on where something is on the spectrum around turquoise). Consequently, I chose to have one tie-dyed quite a strong pink.

Somewhere around the same time, I decided that I needed some music in the lab. Supervising class practical sessions needs total concentration so that you know everything that is going on in every corner of the lab, but if the practical is all running smoothly, this can get quite boring, particularly if what they are doing is rather routine. So, I spent some spare money on a tape player, amplifier and speakers and started playing classical music from my collection at home.

This started with A-Level groups and then moved down to GCSE groups and even occasionally to a third form group. Chamber music worked best because it is clearer; large orchestral pieces echoing around in a big lab just sound ‘muddy’. You mightn’t expect this to appeal to teenagers, but it did, and if I forgot to put it on, they invariably reminded me. What it did was make the whole lab experience feel calm and civilised.

Occasionally a senior member of staff would show parents and potential students around the school, and they would be ushered into the lab with me in my pink lab coat, music playing, and everyone absorbed in the music and what they were doing. One parent told me later that it was this experience that decided them on sending their daughter to the school.

Before Truro School became fully independent in the 1970s it was a Direct Grant Scheme school and took 11+ students from the Truro area because there was no boys’ grammar school in the city. The last year of 11+ (which uniquely included some 10+ students as well that year – my son, Paul was one) generated one of the best years ever.

In those days, as well as A-Levels there were harder S-Level papers available, and most years you might have two or three chemistry students doing S-Level exams. When that cohort reached their A-Level year, I remember sitting around a bench in the lab with (I think) 13 of them doing S-Level – that was completely unprecedented. A discussion started between them, and I realised that I had no idea what they were talking about (In fairness to myself, it had drifted into atomic physics!). That was actually a joyous moment. They had essentially outgrown school and were moving on. I realised, as a school, we had done a brilliant job with them.

But it wasn’t only the outstanding students that we were successful with – there were plenty of ‘average’ students who achieved more than they ever expected.

Quite a lot of our students were aiming to be doctors, dentists, vets, physiotherapists and so on. I remember a very able girl saying to me “I’m going to be a doctor. Why do I need to know the conditions for manufacturing polythene?” There is no good answer to that!

During my time at the school, Wednesday afternoon was established as a time for games and activities. As someone who has zero sporting interest or ability, I always saw that as a waste of my skills, and eventually came to a compromise where I provided a space for supervising off-games pupils and used the time for a chemistry clinic for A-Level students needing a little extra support.

Obviously, that helped them, but it also had an enormous influence on my future, because it gave me real insight as to where their difficulties lay, and to sense immediately when students were finding my approach unclear.

After I took early retirement, I wrote a number of successful chemistry textbooks and developed the chemistry website Chemguide (www.chemguide.co.uk) which now has a vast audience worldwide. After all this time, I still write with a ‘ghostly student’ beside me and can tell when they aren’t following, and it needs rewriting.

They will probably be surprised to hear this, but I owe a huge debt of gratitude to the students I taught one-to-one or in very small groups. This wouldn’t have been possible without them. 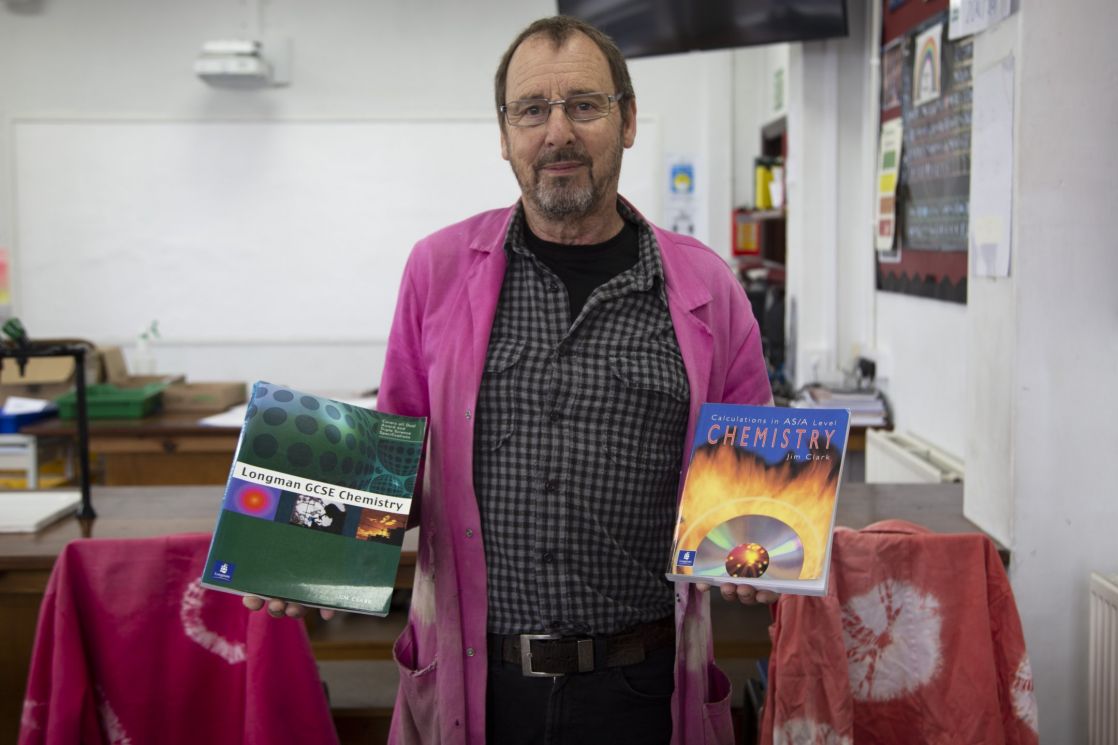 Jim was a superb teacher of chemistry, a quiet authority in the classroom and laboratory, commanding respect from students and staff alike.

Jim was dedicated to making sure he taught as truly factual chemistry as possible, whilst also making it enjoyable. Often frustrated by the many inaccuracies, poor descriptions, incorrect data, out of date, missing or unverifiable ‘facts’ and many confusing or poorly laid out, chemistry textbooks, he set his mind to improve this situation. This resulted in a great deal of research and writing, including becoming the author of new textbooks, and the very well-known Chemguide website, all of which have become invaluable to A-Level students everywhere!

I’d describe Jim as a true academic. He also enjoyed walking many long-distance footpaths in the Peak and Lake Districts, the Dales and South West Coast Path. It was, then, not too much of a surprise when Jim appeared having incurred a foot injury. What was surprising, however, was that this was no walking related injury. After a difficult day he decided to go home and begin a spot of DIY, taking his frustrations out on an old greenhouse with a concrete block base. Unfortunately, he dropped one of the blocks on his toe. Jim concluded that safety boots might be a good option in the future!

Jim’s foray into beach fun, likewise, did not end well. Leaving the safety of academia and the gentle footpaths and byways of the countryside (and DIY), he tried something completely different…. sand tobogganing! Speeding down the steep slopes of soft sand at Crantock on a Christmas day must have been thrilling, at first. However, a bump at the base of the dune was enough for the sledge to become airborne for a brief moment before landing on the damp, compact, concrete-hard sand of the beach. The resulting back injury required the attendance and use of the Cornwall Air Ambulance, as can be seen in the picture. Fortunately, a full recovery followed. Jim is the only chemistry staff member, ever as far as I know, to make use of this service! 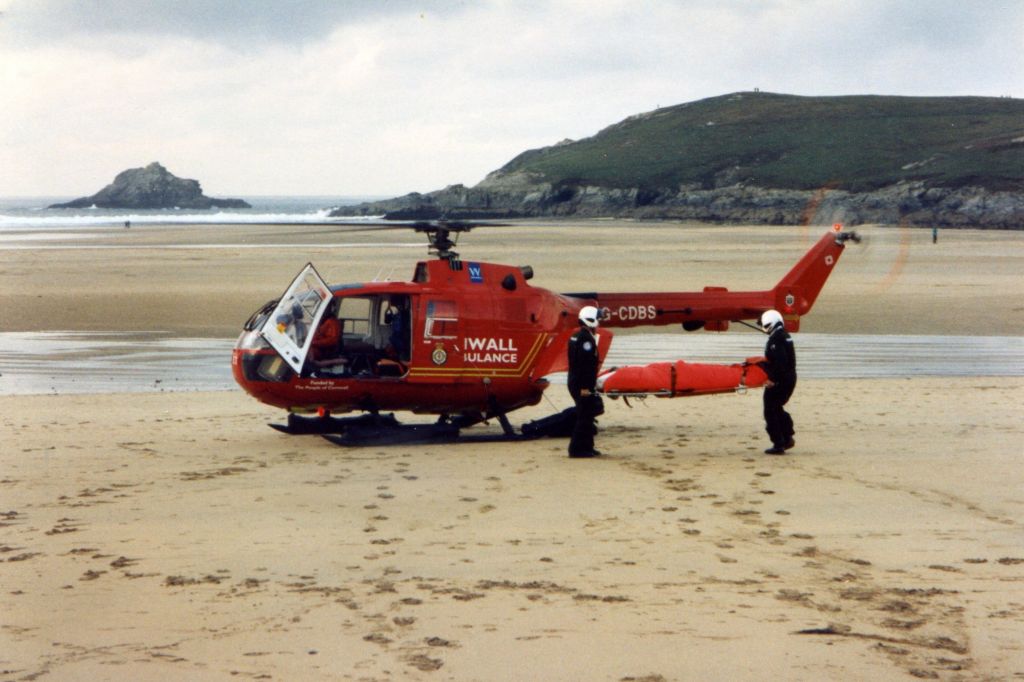 The world out there is a dangerous place. Give me the safety of the chemistry laboratory any day! 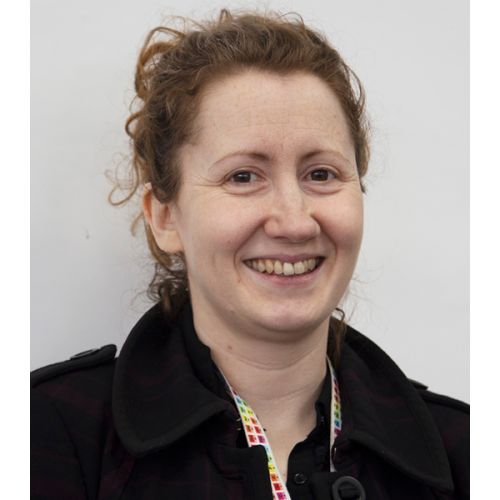 Back in 2013 I was excited to start my new job at Truro School as Head of Chemistry, fresh faced and eager to meet my new team. When I first met Pete, my technician, I soon realised he was a veteran of Truro School, and having worked there for many years, he had worked with quite a few chemistry teachers in his time. Chatting over our usual morning coffee one day, he casually revealed that Jim Clark had once been Head of Chemistry at Truro School. Now this was a huge bombshell. As every good chemistry teacher knows; the most reliable and unanimously respected website out there for improving students’ understanding of A-Level Chemistry is ‘Chemguide’ and I had just discovered its esteemed author had previously run my department! I was both delighted and a little intimidated, but I couldn’t wait to tell my A-Level students as I knew they would be as impressed and amazed as I was. Now I proudly tell every new A-Level cohort about Jim Clark and his Truro School legacy, and year on year, my students use ‘Chemguide’ to develop and enhance their chemical knowledge. They trust Jim Clark’s explanations unconditionally, as we do as teachers, and I can say with certainty that without his website, A-Level students around the world would be a little lost! Thank you Jim: and if you ever fancy popping in for a coffee with Pete and myself, you would be most warmly welcomed, and our students of course would be completely star struck! 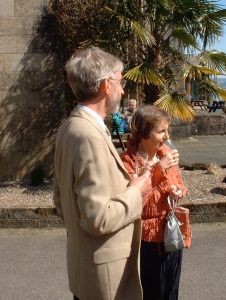 Jim and his wife, Kay at their daughter’s wedding 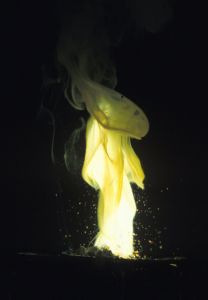 “Some reactions are too dangerous to be done by a whole class. (Magnesium powder and zinc oxide heated on ceramic paper.)” 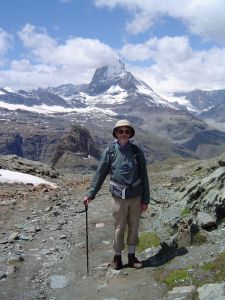 “Despite my aversion to sport, I do like walking! (Above Zermatt)” 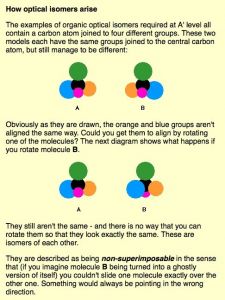 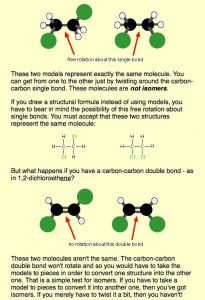