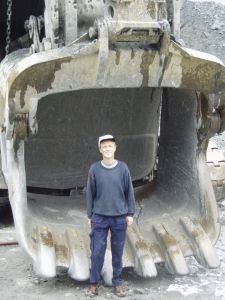 David Alderton discovered his passion for Geology in the classroom of Mr Leonard Penna (TS 1945-1979) at Truro School. David describes Mr Penna as being ‘a positive influence’ in his decision to pursue a career in Geology – a distinguished career in academia which has proven to be both long and successful.

At school David enjoyed the friendships, sport, school activities, and classes, and feels that Truro School taught him many other useful life lessons:

“I believe Truro demonstrated well the ability to maintain a healthy balance between the academic and social sides of life. It also certainly developed in me, the very useful skill and ability to mix and socialise with a wide range of individuals and personalities”.

David considers the many ways that Truro School has changed since his time in the 1960s:

“I recall the hard beds, chilly bedrooms and remember in those days wearing shirts with detachable starched collars!  It could perhaps be described as a little austere, but none of that bothered us at the time.  I reflect with fondness, on the wonderful freedom we had, which perhaps is sadly not possible these days.  We went on 50-mile charity walks from Falmouth to the Lizard and back, went rock climbing near St Just and we were able to venture into the countryside unsupervised”.

Once David started studying A-level Geology, he very quickly realised it was to be his chosen career path.  At one stage he briefly considered the idea of the mining industry as a possibility but soon concluded that academia was the desired route for him.

After successfully completing Sixth Form, David enrolled at Kings College, London to study Geology. “Since then, I have never left university life”. After completing a PhD and then postdoctoral research, David became a full-time Lecturer, working for the last 30 years at Royal Holloway, London.

“When I reflect upon my years as a university lecturer, I feel fortunate to have been instrumental in assisting the academic growth and personal development of many young people. It gives one great satisfaction to see a definite improvement and an increased motivation in a student”.

David has only recently retired from his position as a Lecturer. However, he has not yet cut his ties with academia or the University, having been awarded the position of Honorary Researcher at Royal Holloway, which allows him to continue geological research, of his own choosing.

“Once a Geologist, always a Geologist! In my free time I am steadily finishing off some research work and have just edited a six-volume Encyclopaedia of Geology. I belong to various geological societies and still give some lectures”.

David offers some advice to those considering a career in Geology

“If you want to study a subject which combines all the basic sciences and has a large component of outdoor work and travel, then Geology would be ideal. Many of my class at university went into the oil industry as the field was expanding and it paid very well (much more than academia!). The future of the hydrocarbon industry is now less certain, but new pathways for Geologists are always appearing, and an increased number of graduates are finding employment for instance in the expanding industries related to the environment and ‘green’ energy production. Geology is a unique subject to follow at university and graduates develop a large range of transferable skills which are applicable to numerous industries.”

Outside the world of Geology, David is learning to play the saxophone and keeps fit through cycling and badminton. He has also enrolled as an education volunteer at the Battle of Hastings site, which he hopes will keep him occupied ‘once the world returns to some sort of normality’ as we emerge from the restrictions of the pandemic.

Although David lives near Battle, East Sussex he has continued to visit Cornwall every year and used to regularly bring his university students on field trips to Cornwall. He has also maintained links with Truro School, visiting to give Geology and Mining talks to our students.

David has continued many of the friendships which began at Truro in the 1960’s. He and a group of seven friends (Neil Palmer CO69, Jon Turner CO69, Garrod Cooper CO69, Simon Nicholas CO69, Glynn Pascoe CO67, Geoff Jenkins CO67, Colin Benny CO69) keep in touch via Facebook and occasionally meet up socially. The friends plan to get together at Truro School for the 100th Annual Reunion Dinner in September 2022.  Having had the Development Office annual events programme on hold for over a year, we are all certainly looking forward to bringing our community together again and hope the reunion will also include David’s brother Ian Alderton CO71, who has recently returned to the UK and is now living in Truro after spending much of his adult life in Canada.

David and wife Jill also enjoy time with their two children, Jane and Russell, and three grandchildren, Ben, Ember and Delphi, and have been looking forward to the marriage of their son, which sadly has been postponed due to the pandemic. Hopefully the celebration will take place soon and will be enjoyed by all the Alderton family. 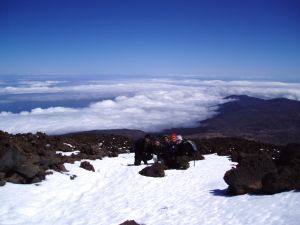 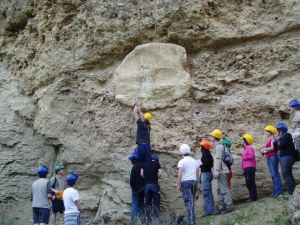 Novel sampling method by students on a trip to Cyprus. 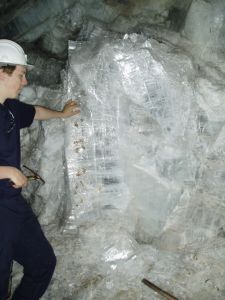 A large crystal in a gypsum mine, North Macedonia. 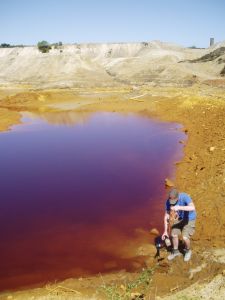 Sampling contaminated water near Wheal Jane mine for a student project.