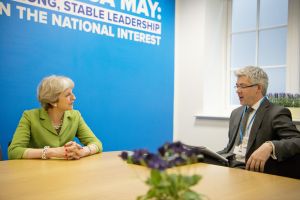 When Christian joined Truro School he was following in the footsteps of father, Andrew CO72 and great grandfather Rodney Ward (TS 1916-1920). In 2004 Rodney reached the remarkable age of 100 and was recorded as being the oldest living old boy on record at the time. Christian remembers travelling to the Isles of Scilly with headmaster, Paul Smith (TS Headmaster 2001-2012), for a ceremony at his family home, on the beach, which he describes as ‘a wonderful memory.

Coming from the Isles of Scilly meant Christian became a boarder at Truro and loved his time in the boarding houses; Poltisco and then Trennick, and he describes Truro as ‘a buzzing metropolis’ compared to the sleepy calm of the Isles.

“Coming from a much smaller school on the Isles of Scilly, Truro School was something of a culture shock. Before arriving, the cinema was a treat reserved for rare trips to the mainland, so imagine my delight at being able to go every weekend. As I got older, and more involved in school life, I found myself thinking of it as a home away from home.”

Christian loved the theatre and relished the drama opportunities provided at Truro. Playing half of the duo Ant and Dec as part of the opening of Jesus Christ Superstar remains a highlight for Christian! In fact, his love of Truro School theatre productions led to him returning in his gap year to direct a Tom Stoppard play performed in the Burrell Theatre.

For a long time, Christian had hopes of becoming an actor:

“Maggie Hutton, the school’s fantastic London Academy of Music and Dramatic Art (LAMDA) coach, talked me out of it – She didn’t mean to, but she gave me an unvarnished account of what an actor’s life might entail and I realised it probably wasn’t for me.”

Left with no clear idea of what he wanted to do Christian applied to study Psychology at Cardiff University but alas, did not achieve the requisite grades which he now looks back upon as a blessing. He then applied to read Politics at Exeter.

“I really enjoyed it and found myself enthralled by the world of politics which took me to Westminster, working for a range of think-tanks and campaign groups.”

For the past ten years Christian has lived in many locations around London, finally settling in Tooting having met wife Eliza there. They married in 2018 and have a son, Chaplin (named after Charlie), and a daughter, Amaryllis (named after a flower that grows at Christian’s home on Scilly). Christian’s brothers also live in London: Joshua is married with twin daughters and Arran is engaged. However, Most of Christian’s family are still in Cornwall or on the Isles of Scilly, which means he retains deep links with the area. He visits ‘home’, the Isles of Scilly, as often as he can and has been back to Cornwall for a few weddings, christenings, and funerals. He also remains close friends with fellow Old Truronians, Sophie Hicks CO09 and Francis Clarke CO03.

In January of this year, Christian started a new career as a Managing Director at Teneo, a global CEO Advisory Firm, but from 2015 to the end of 2020 he was the Editor in Chief of City A.M., a daily business and finance newspaper in London which he describes as ‘a tabloid version of the Financial Times.’ With approximately 60 people in his team Christian had editorial responsibility for the daily newspaper, as well as magazines, website, and podcast.

“The paper has around 250,000 daily readers and each day I got to write headlines for the front of a real newspaper, so it was just a tremendous amount of fun – a long way from ‘The Poltisco Times’ which I launched as a 13-year-old boarding pupil, and which managed a grand total of two editions. At City A.M. I set the editorial tone of the paper and managed the news, features, and other sections.”

Christian remains incredibly proud of the City A.M. team, for the way in which they reported on a range of major events from terror attacks in London to the Brexit referendum and general elections.

“I am also enormously proud of the fact that so many of the young reporters I hired have gone on to become household names at Sky News, The Telegraph, Financial Times, and other media companies. Identifying and nurturing young talent was a big part of my role and something I really enjoyed.”

City A.M. was an unplanned career move for Christian. The opportunity arose when he was working as Head of Communications at the Institute of Directors and the owners of City A.M. approached him with an offer to become their newspaper editor. Although Christian had completed a masters in Journalism and had always worked around the media, he had never been a journalist – let alone an editor.

“I said OK, and I got stuck into learning on the job. I started work on Sunday 17 August 2015 and by the following morning I’d put together my first newspaper. At the end of that week, I had done five of them, and I fell in love with the excitement of it. It was a bold decision on the part City A.M. and the news of my appointment was met with a lot of scepticism from some parts of the media.

There is no doubt in my mind that I wouldn’t be where I am if I hadn’t attended Truro School and hadn’t been able to take advantage of the many opportunities it afforded me. Being part of a community, with a sense of ‘belonging’ has always been important to me and that started with Truro School – and Scilly, of course.”

Balancing family life with a demanding job and late finishes (often 11pm-midnight) brought a lot of challenges but Christian understands the importance of family time: weekends spent with his family; walking through Wimbledon Common; driving out to the country for walks and short breaks. He also loves to cook, and he and wife Eliza entertain as much as possible. Like a lot of people, they’ve really missed this over the last 18 months.

“Having recently discovered how relaxing it is to have a garden and to spend time caring for it, I have been planting plenty of Amaryllis and Narcissi bulbs to remind us of Scilly.”

Words for those just starting out on their career journey:

“I think it’s easy to blame luck and good fortune for career success and while these things certainly have a role to play, there’s no point hiding from the fact that hard work and risk-taking probably play a larger part. I have always thrown myself into whatever job I have had and done my best to create and grab every opportunity. So, my advice to anyone, regardless of their career, is to put in the effort to do a job well, earn a reputation and never consider a position or a promotion to be out of reach. Also (as I check all this for typos) learn to write well. I have probably hired 40 people over the years and interviewed many more, and people will often fall at the first hurdle if they have not been able to produce a clear and compelling cover letter or CV. This may or may not be fair, but the ability to communicate effectively will only ever become more important in the years ahead.”

The chance to join Teneo and advise some of the world’s biggest companies on complex challenges seemed ‘right up his street’ and too good an opportunity for Christian to miss – and so, a new chapter has begun!

We wish Christian and his family much happiness, and hope to receive an update on his new role in the future.