7 June 2021 marks 140 years since the foundation stone of the school was laid on the present site. It was known for several years as Founder’s Day, which is slightly confusing because the school actually began in January 1880, not June 1881.

Quickly outgrowing its initial home in Strangways Terraces, the school room of the Congregational Chapel in River Street, and the boarding house in Lemon Street, the Directors looked for a new site in Truro for the school. They chose the Trennick Lane site for its vantage point over the city and its healthy nature.

‘The development of Truro into an important educational centre is not an unnatural sequence to its establishment as the leading ecclesiastical town of the diocese, and one of the first steps in that direction was the formation about a year since of a Wesleyan middle class school…

…The site selected is undoubtedly the best that could have been obtained in the neighbourhood. Situated on an eminence behind the Poltisko quarry, within as easy distance of, and overlooking the city, commanding magnificent scenery, and, what is all important to such an institution, having a good gradient and admirable facilities for proper drainage and sanitary arrangements, it is obvious that the choice of the directorate is a wise one’1.

Tenders were put out for an architect to design the new building, with a prize of £25. Eliot Etwell’s‘free treatment of the Gothic’ design was chosen, from a dozen respondents, including one by locally renowned architect Silvanus Trevail.

Local builders Julian and Sons were chosen to carry out the work,and with that in place the Lord Mayor of London was invited to lay the foundation stone. Building work had begun by February 1881 and in May The Cornishman joked that the Lord Mayor had better not delay, or even make his visit earlier, because the work was progressing quickly and it would soon be impossible to lay the foundation stone of the college2.

The Royal Cornwall Gazette on the 10 June gave a full account of the Lord Mayor’s visit to Truro.

‘Tuesday morning broke clear and cool and the weather settling down from the storms of Sunday and Monday, was cheerful, the only drawback being a coldness when one was on the ground of new schools, high above the town, where the wind swept past without impediment’3.

[Even back then the summer weather wasn’t always the best.] 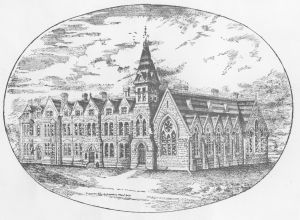 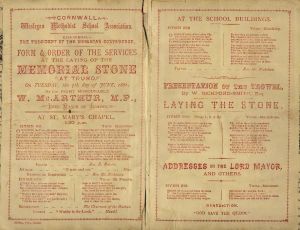 The Lord Mayor arrived by train, and after a lunch held at City Hall, and a celebratory service in St Mary’s Methodist Church, took part in the procession, accompanied by a military band, up to the new school grounds.

‘On reaching the ground the procession opened out on either side, and the carriage in which the Lord Mayor, the Mayor of Truro and Mr Bickford Smith were riding, passed through and drew up opposite the front of the new buildings. But previously to the arrival of his lordship a large company of ladies had assembled, and were accommodated with chairs inside what is designed for the principal schoolroom, the memorial stone being let into the wall beneath the large end window of this room. This part of the building was temporarily roofed in with stout canvass, which was extended beyond the schools to cover a raised platform for the Lord Mayor and the other distinguished visitors. The scholars with their masters occupied a mound on the right–hand side of the block of buildings, whilst the Sunday school children were drawn up facing the school, having on the left front the band of the Royal Marines, which accompanied the hymns. The ceremony began with the hymn ‘O Lord of hosts, whose glory fills’ and prayer by the Rev. T Richards’.

Directors of the Cornwall

‘and the Lord Mayor having proved and tested it said: I pronounce this stone well and truly laid, in the name of the Father, and of the Son, and of the Holy Ghost, and I pray that God may add His blessing and I pray that this Institution may be made a great blessing not only to this ancient city of Truro, but to the county of Cornwall and to the nation at large, and I do trust and believe that after generations will have cause to bless God for the labour of this day. I congratulate the gentlemen connected with the Institution upon the spirit and enterprise which they have manifested in regard to today. I congratulate them upon having secured such a beautiful site, and I do trust that they will have the satisfaction and pleasure of seeing large numbers of intelligent young men sent out from this Institution who may be a blessing not only to their own families but a blessing to the world at large.…’

After a few short speeches, the occasion ended with a public dinner for over 400 in the city’s Concert–room, provided by the Red Lion Hotel. 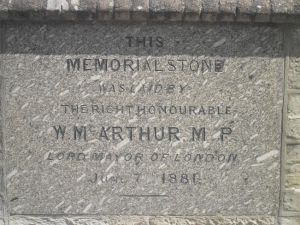 ‘the Lord Mayor really came to do an important service to his denominational brethren, but the Catholic spirit which prevails in Cornwall prompted the sincere sympathy of those belonging to other religious bodies, and the day is one which will be long remembered as an exceedingly pleasant one by the many visitors who flocked into the city, either to take an active part in the ceremony, or merely as spectators’4.

The Gazette expressed the view of the Victorian patriarch that

‘one of the gravest of the many anxieties afflicting the mind of a Christian parent is to find for his children the safest, healthiest and best school. To meet this requirement, we want a system of Middle Class Colleges, where the privileges of a first rate classical or commercial education shall be imparted along with the foundation of truth, the principle of all Christian morality, which alone can make a worthy British citizen … The school is acknowledged to be supplying a great want, and to be bringing within the reach of the middle-class population of the county a thoroughly sound education, based on religious principles, at a very moderate cost’.

The new building would be made up of a central block with two wings. The central and right wing would be devoted to school and administrative purposes, while the left would be residences for the headmaster and masters, servants’ apartments and the kitchen. It was being built from local stone quarried from the ground on the river side of the building with white brick dressings, and cornices and mouldings in white terracotta.

‘The central or main part of the front elevation recedes slightly from the wings, giving the main entrance approached by three steps, and flanked by two square headed two-light windows, which are continued on to the higher floors, the uppermost being above the parapet and running back into the roof with Gothic gables. The frontage of the right wing embraces the end of the schoolroom, which, although not detached, is almost a separate building, and is purely Gothic in style, running along the side of the main structure. In this wing is the school entrance, under a square, ornamented tower, standing boldly out and carried 25 feet above the main roof; in this tower it is proposed to place a four-faced clock. The windows of this wing are square headed, and similar to those in the central building, monotony in appearance being prevented by a large Gothic-headed window of three lights in the end of the schoolroom. …The extreme length of the building is 168 feet, breadth 104 feet and height from basement to roof 35 feet, the whole standing on between four and five acres of ground.

… It is replete with every convenience, and will prove in every respect a really model building. On entering the main door the visitor will find himself is a vestibule of noble proportions communicating with the hall, which in its turn gives access to a long corridor running parallel with the front. Immediately opposite the hall is a massive granite staircase with a hoist communicating with the topmost story. On the right is the directors’ room and cloak room, and beyond these the school entrance in the right wing. At the extreme end of the corridor admittance is given to the school-room, an apartment 65 feet by 25 feet, having accommodation for 170 boys. This room is be stuccoed in the interior with an open timber roof. On the left of the corridor is the assistant master’s room, and adjoining that the study, whilst opposite these apartments, and extending to the back is a large dining hall 70 feet by 25 feet, and at the further end a door communicates with the headmaster’s apartments. On either side of the front entrance are the reception room and drawing room, and at the back dining and sitting rooms, whilst at the rear is the kitchen, measuring 25 feet by 16 feet. On the side and back of the schoolroom are five class rooms. On the first floor is a corridor similar to that on the ground floor just described, running the entire length of the building. Over the directors’ room and extending from the hall into the tower is a dormitory capable of accommodating at least 26 boys, and another similar apartment is planned over the hall, whilst to the left and rear are the assistant masters’ rooms. The servants’ bedrooms are at the rear of the headmaster’s apartments. The tower on each side of the two upper floors is devoted to bath rooms, and there is space over the five class rooms for additional dormitories, should the demand upon the school necessitate it. The top floor is very similar to the second one, and here there is a convenient hospital carefully isolated from the remainder of the building, taking the place of the rearmost assistant masters’ bed room. All the usual offices are provided, and from the care bestowed upon the ventilation and drainage a thoroughly healthy building may be confidently looked forward to…’5.

The new building would accommodate 120 boarders, in addition to day scholars, and would be opened in the late spring of the following year. 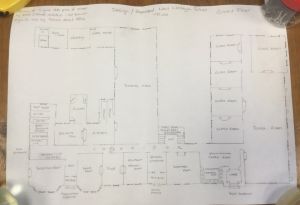 A sketch of the ground floor plan drawn up by Eliot Etwell, from the original held by the Archives and Cornish Studies Service at Kresen Kernow. 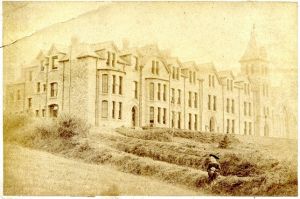 From 1950s, the stone is just visible behind the car