‘These took place on Friday, June 3rd, in glorious weather. The date was considerably earlier than usual, and this perhaps interfered with the training, which was not conducted with anything like Spartan rigour. The results were, nevertheless, for the most part fair, and in some cases distinctly good; in eleven of the events, last year’s records was improved on, and on a better course might have been more so…’

‘The Tennis Club has this year been something more than a name; in fact unprecedented keenness has been displayed by many boys, and, if only time could have found to decide it, a Tennis Tournament would have been held to compete for the racquet kindly offered by Mr Bownscombe.’

‘The Swimming Races against Probus School could not be arranged. The Championship was, however, decided in the river, and was won by T. Pryor, Salmon running him close the whole way.’ 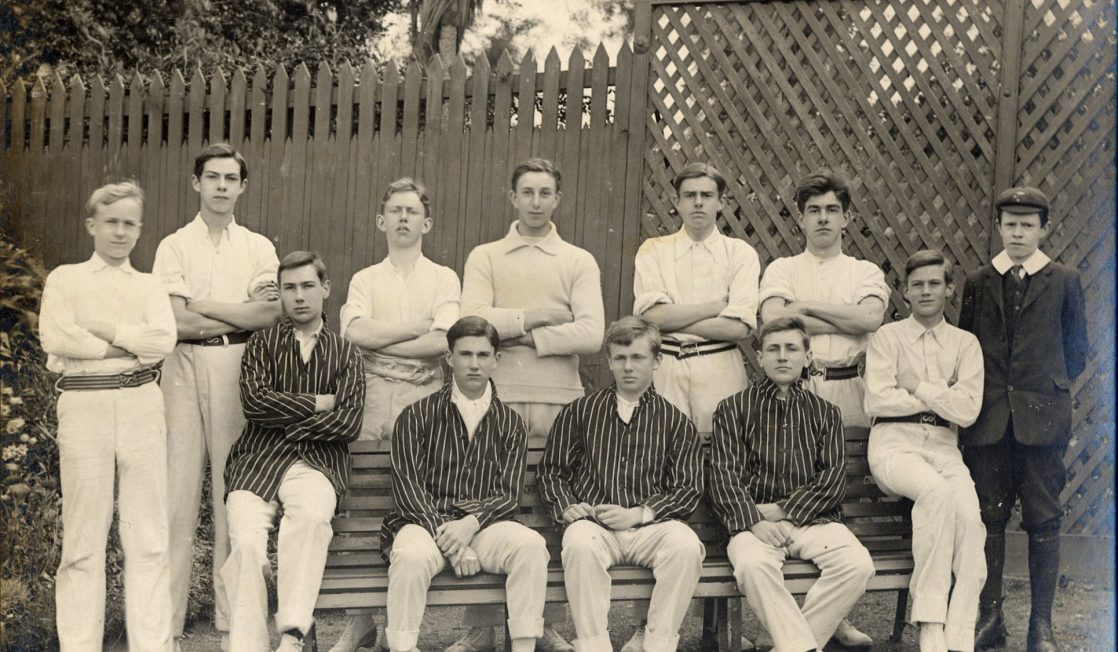 ‘While the measles were rampant we were glad to welcome an interlude in the shape of M. Salmet and his aeroplane. The aviator arrived whilst we were at tea. A frantic rush ensued, and we were just in time to see the aeroplane circling above Truro. M. Salmet came fairly close to the School grounds as he swerved to descend, and everyone was much impressed by the skill with which he handled his plane in the teeth of a sharp gale. We were all greatly disappointed that the airman was unable to give an exhibition flight, owing to the dangerous state of the weather.’

During June 1912 Henri Salmet toured Cornwall in his Bleriot monoplane. On 13 June M. Salmet landed at Tolgarrick Farm on Arch Hill in Truro ‘at about 6.10 pm … after having flown from Newquay during half a gale of wind. He flew fourteen miles in nine minutes.’

Long holidays are apt to lose their pleasantness unless we become engrossed in the pursuit of some enjoyment which necessitates either mental or physical activity. Not so with the ‘half-term’ holiday. The enjoyment of it is greatly enhanced by its shortness, and is like an oasis in a desert. The ‘half-term’, Mr Editor, about which it is my duty to write, began on Saturday, June 3rd. In the afternoon, most of us were either playing or watching a cricket match against Redruth County School.

Sunday passed. We were filled with joy when we awoke on the Monday morning to find good weather prospects. A cricket fixture had been arranged with Veryan on their ground for the afternoon, and it was hoped that all who remained at the College, would be able to see it. Although unceasing efforts had been made to procure conveyances, only one was available, and unfortunately this did not hold more than fourteen. The lucky fourteen started from Truro at 10 am with three masters following on bicycles.

Arriving at Veryan we were greeted by Mr Webb and after having deposited our hand bags with him, we headed for the beach. Here we spent two hours, the most energetic of us bathing. Before long, however, we began to feel ‘peckish’ so we returned to the village and lunched at Mr Webb’s.

At 2.30pm the match began and a ‘ding-dong’ struggle for runs ensued. The scoring on both sides was low, and the match will be memorable in the annals of the College. At the conclusion of the first innings, a generous tea was provided us, and when at last stumps were drawn we were loth to return homewards.

The day had been magnificent and although our means of transport were not of the best we forgot the discomfort in song. The wonderful variation of the scenery was delightful and above all the homeliness of Mr Webb left nothing to be desired. We take this opportunity of expressing our deep gratitude to him and of wishing the Veryan Cricket Club continued success.

Played at Veryan in ideal cricket weather. The scoring was extremely low, but, in spite of this, it proved a very exciting match. The College batted first and were dismissed for 33. Veryan went in and when 9 wickets had fallen for 32 runs, Toye saved the game, amid breathless excitement, by holding a clever catch.

‘…There was a very close competition in putting the shot. Nicholls making a throw of 31ft 2 ½ ins, which won the event for Wickett House. The next three best puts were all within 18 inches. The Potato Race for aspirants under ten years of age was as usual a very important event. Scoble won the event and a fountain pen in dashing style…

‘…Then came the House Relay Races, the most important events of the day. School in the senior event, gained a lead in the first hundred yards which they maintained until the finish. In the junior event Wickett ran away at the very start to win by a clear fifty yards, and also won the Under 12 event in dashing style.

‘…The most amusing event was the Mile Handicap, in which the spectators had the great pleasure of seeing Billy Hickson, aged 78 months, perform. He completed the five laps in fine style at his steady pace of five miles per hour, which never varied from start to finish…’

Annual Athletic Sports. The annual Sports took place in ideal weather in the new Cricket field, Trennick Lane, on Saturday, 13th June. The shape of the field makes it possible to set out a full Quarter-Mile track and a straight course for the 220 yds,

The Headmaster explained that owing to the war conditions there would be no prizes, and the boys would run only for the honour of gaining points for their prospective houses. He introduced Miss Gladys Thomas, Mayoress of Truro, who declared the sports open.

The Mayoress, accompanied by the Mayor, attended the school assembly on Tuesday, and handed the challenge cups for senior events to the winners. Miss Thomas said how greatly she had admired the keenness of the contest, and particularly congratulated Norris on breaking the records in the hop, step and jump.

Sir George Perrin Christopher, an eminent figure in the shipping world, was one of the many former students of Truro School who returned there, on Saturday, for the annual Whitsun reunion, arranged by Mr John Tonkin (Hon. Sec.) for the Old Boys’ Association. Sir George and Lady Christopher were guests of honour at an informal supper in the evening in the School dining hall, which was followed by table tennis and dancing… Altogether, the gathering, which included members and their ladies, totalled over 90, and there were many complimentary comments on the beautiful flowers which adorned the long tables. Former students came from all parts of Cornwall and beyond, and Mr Creed read messages of greeting from members of the flourishing London Branch…

June 27th was an equally fine evenings for a trip down the river. For a number of years this event has been missing from our programme, but its revival proved to be much appreciated, and we hope it will become an annual event. About 60 members, and a number of orthopaedic patients from the Infirmary as our guests, travelled to St Mawes for a short stay, and then returned to Roundwood Quay for pasties, coffee and biscuits. We arrived back at Truro at 10.30…

‘Recognition of many years of faithful service to the School and to Truro School Old Boys’ Association was made at the annual Whitsun Reunion held at Truro School on Whit-Saturday, when Mr GLW Beards of Truro, was presented with a leather document case and a fountain pen to mark his retirement from the Hon. Treasurership of the Association, which he had held since 1946. Mr Beards has been made a Vice-President.

‘…They welcomed Mr Bedford Daniel, of Penryn, as his successor… the late Mr Will Lobb, of Truro, had held the office for nearly as long – 14 years.

‘Dinner was held in the School Hall, and there were about 70 Old Boys and their ladies present.’

Through a Stained Glass Window

The sun slants down 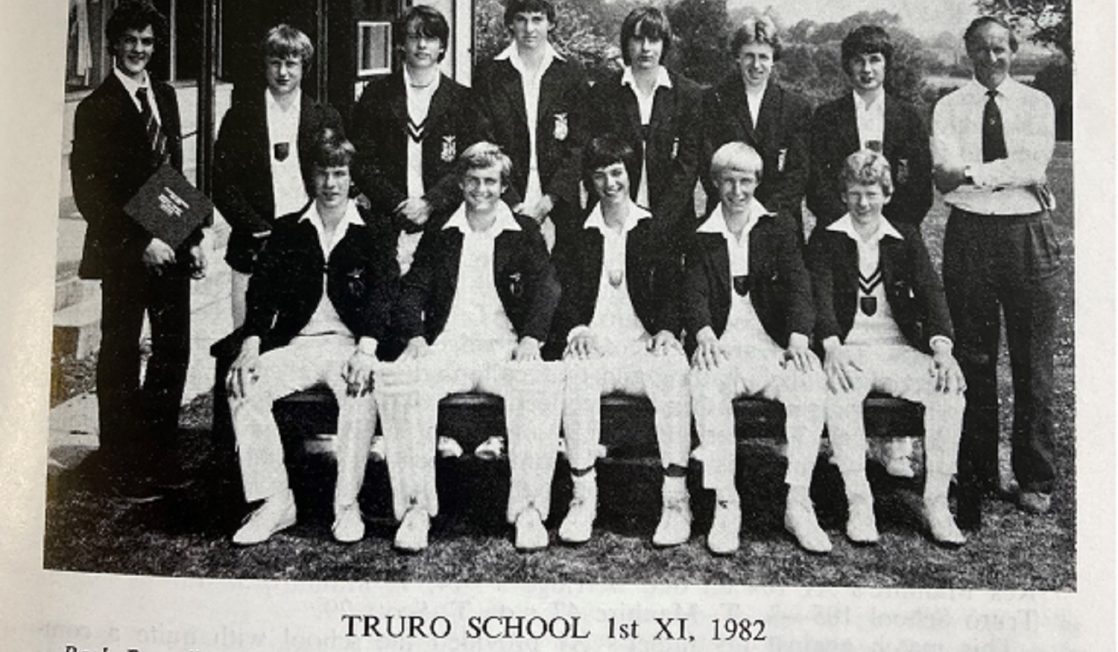 A welcome return to form by Jerry Stick, scoring a fine 58 and an adventurous knock of 34 by David Morton were the highlights of our batting. A flourish at the end by Mark Blomfield, 16 n.o. and Charles Bailey 16 n.o., helped us to attain a reasonable score. Against our bowling, Wellington never looked like winning and again Ian Berridge was the pick of the bowling with figures of 3-17 from a hostile spell. The Wellington tail-end batsmen hung on for a draw and we made the long return journey back to Cornwall having to be content with just that. 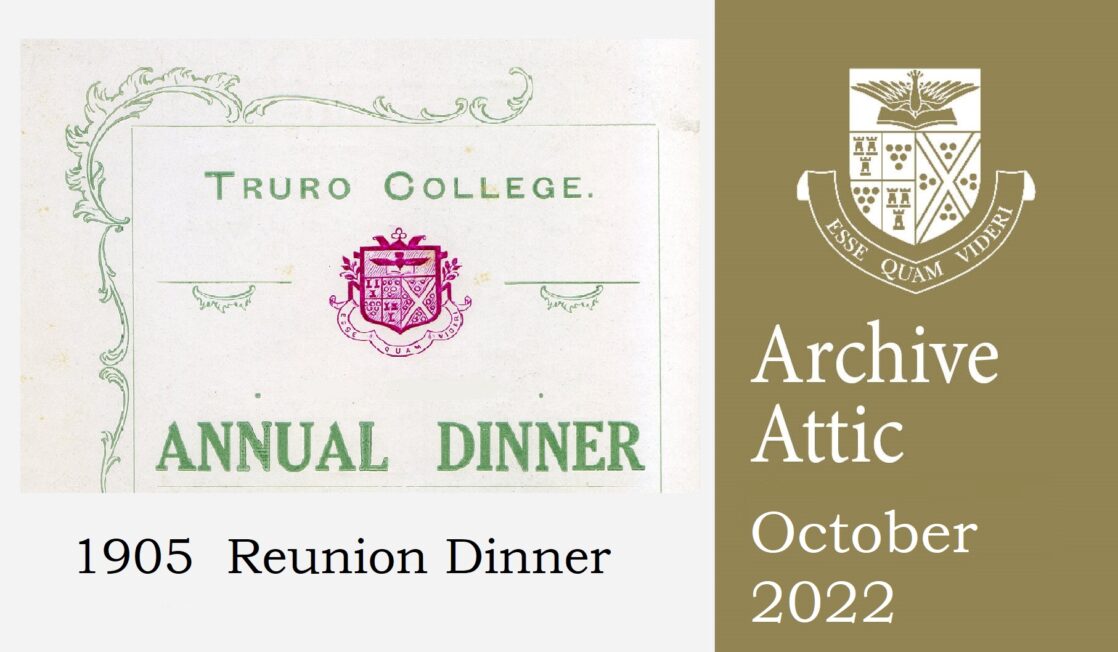 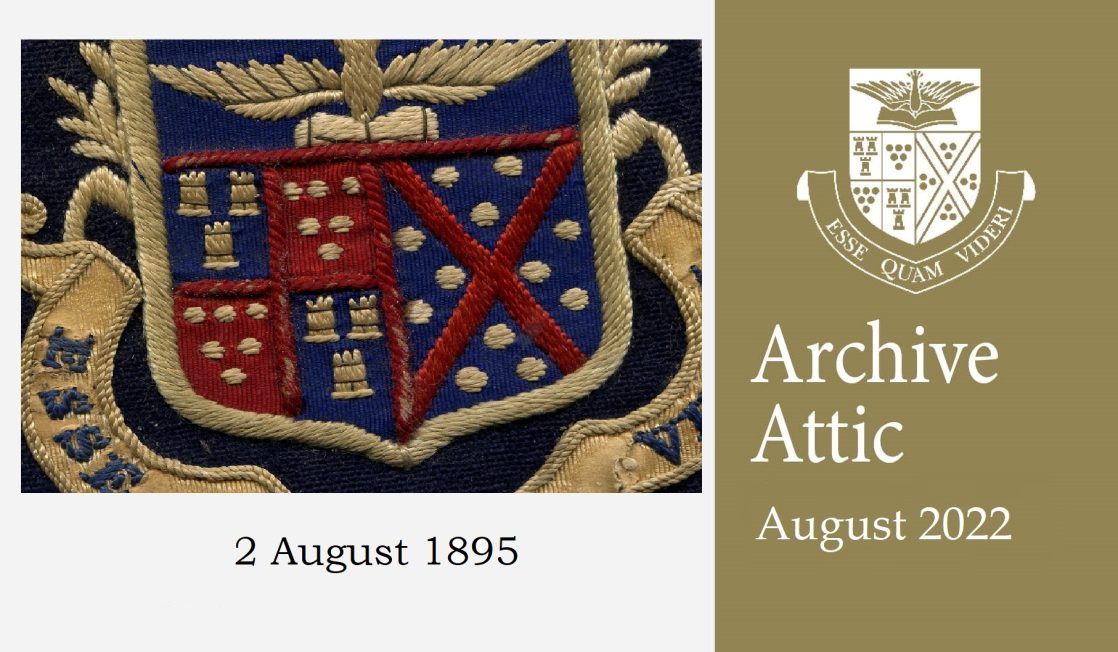 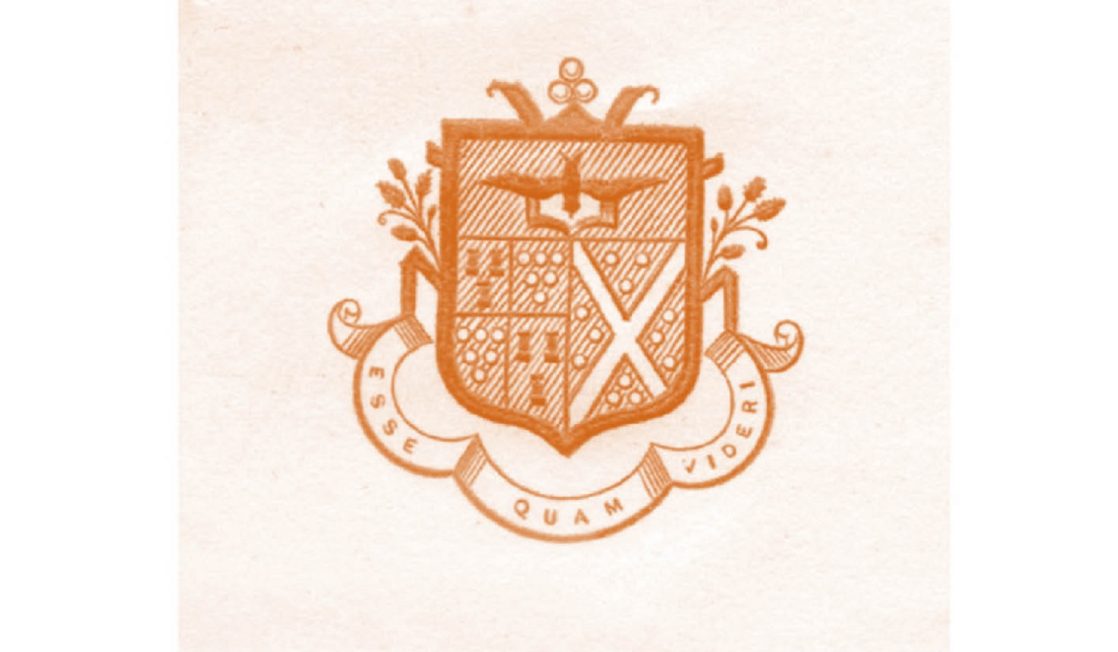 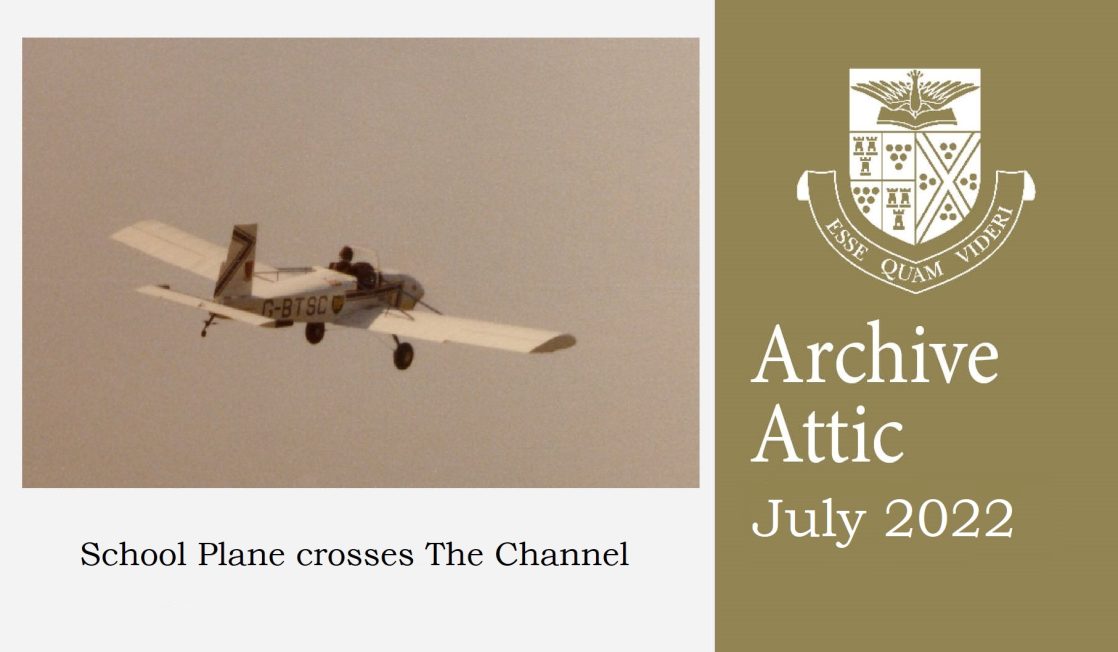