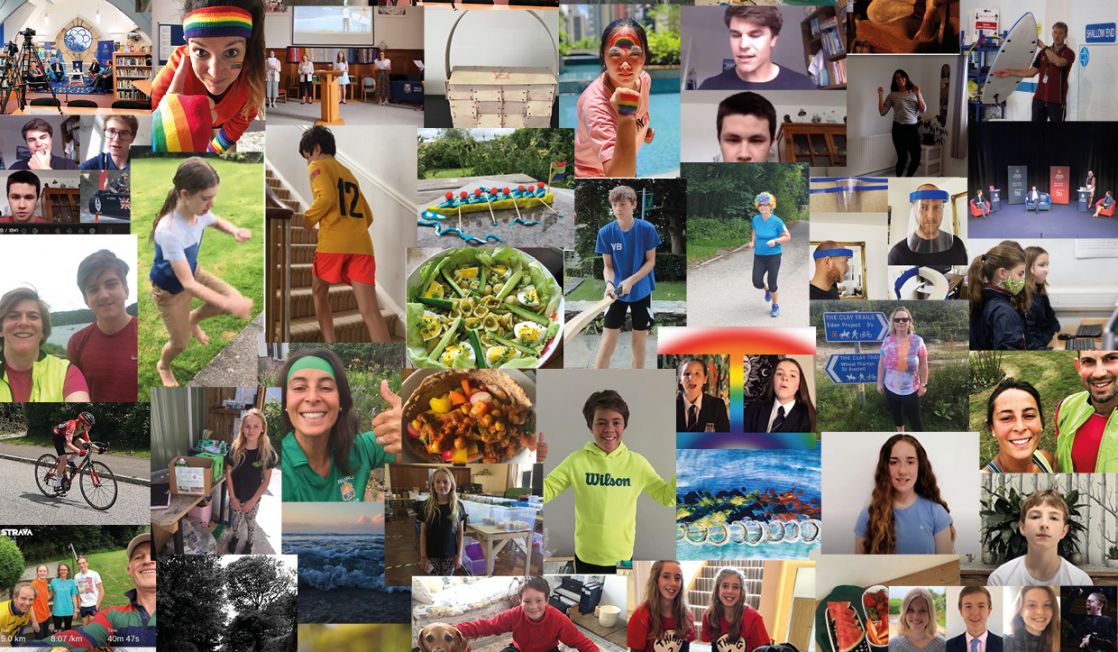 Coronavirus: A year on

This week marked a year since the country entered the first lockdown in March 2020, and on Tuesday Senior and Prep commemorated the national day of reflection at midday with a minutes’ silence. At times it has been easy to feel like much was lost during the pandemic, but it is those moments when it’s important to remember that so much was achieved.

We take a look back at the year and how the Truro School community came together to support and guide each other through the pandemic, kept learning alive, embarked on brilliant charitable journeys, and made the most of the unprecedented circumstances.

Truro School moved immediately to online learning at the end of the spring term and with patience and practice, a new routine was established. An Enhancement and Enrichment Programme was set up for 5th Years and Upper Sixth after it was confirmed by the Government that 2020 examinations would be cancelled. The programme introduced 5th Year to life in the Sixth Form, and Upper Sixths were prepared for life post-18 with sessions on preparing for university and the world of work, as well as continuing to delve deeper into subjects that interested them. The school site remained partially open for children of key workers.

Spirits were kept afloat with fun videos, challenges and activities. A particularly memorable video being a rendition from Senior staff of ‘Count on Me’ by Bruno Mars. Relive that moment here. The Rev took his chapel services online with his uplifting words and weekly updates came from Mr Johnson and his predecessor Mr Gordon-Brown.

The co-curricular programme evolved and new skills were mastered. There was plenty of delicious bakes as the soda and banana bread craze swept social media. A mass collaboration from the art, drama, music and DT departments encouraged creative pupils to keep being inspired and let their feelings and surroundings guide their projects. When the November lockdown was announced, Wednesday Afternoon Activities were once again adapted so that everyone could be catered for on site.

Truro School donated its use of catering facilities to help The Hive Cornwall batch 4000 meals a week for people suffering from food insecurity. Likewise, Jenna (CO20) put her Leiths Diploma into practice by making soup, bread and stews and delivered over 300 a week, as well as asking supermarkets for food waste donations.

As a shortage of PPE was reported by frontline workers, the DT department wasted no time in putting the School’s 3D printer to use and produced 1000 face shields which were delivered to GPs, hospitals and care homes. Kayleigh (now in 3rd Year) got to work using her textile flair to stitch together masks in partnership with Cornwall Cloth Masks.

Fundraising efforts didn’t slow down and the boarders, despite being up to thousands of miles apart, worked together on Mrs Mulready’s and Mr Copeland’s ‘Challenge 75’ and raised a generous £775 for NHS charities, undertaking a vast range of activities. George, Finn, and Stan (now 3rd Years) ran a combined 60km in six hours and totalled over £600 for National Emergencies Trust. The annual Rainbow Run, like many other events, went virtual but that didn’t deter Truro School staff and pupils, £593 was raised by running or walking 5km for the chosen charity Children’s Hospice South West. Over the summer holidays current Upper Sixths Gracie and Sophie walked the Saints Way to raise money for Cancer Research UK, which took a hit in their donations due to Covid-19. They surpassed their target of £250 to over £700. There were many more fantastic fundraisers from the pupils, including Prep. A massive well done for all your efforts.

Sadly, we were unable to invite prospective families to Truro School on the annual open days and evenings. Nonetheless, a new plan was quickly hatched and so the open events became virtual. Live Q&As with SLT and Heads of Sixth Form and Head Boy and Head Girl allowed the opportunity for new families and students to still ask those all-important questions and discover everything Truro School has to offer. In addition, the usual concerts and performances were pre-filmed to watch from the comfort of your own home, and the Careers, Medical Pathways and Aspiring Healthcare programmes continued in full swing with guest speakers giving talks on Teams, which were also recorded.

Meanwhile the Old Truronian community were brought closer together than ever, whether they still live locally or on the other side of the world, thanks to behind-the-scene efforts from the development and alumni team. ‘Keeping Connected’ newsletters were born, containing uplifting tales of OTs helping in the pandemic, offering help and support, keeping them informed with school news, providing Mrs Taylor’s tempting recipes, and even getting them involved with lockdown challenges.

When the school grounds awakened from its hibernation a couple of weeks ago, a sense of hope and happiness filled the atmosphere as some normality was returned. At a week’s notice in January, part of the SBA was converted into a testing centre ready for school to open after the Christmas break. However, the third national lockdown was announced. When the new March 8 return to school date was confirmed, pupils were tested a full week beforehand.

This year has affected us all in a multitude of ways, and it has not been an easy ride, but the Truro School community really lived up to the school motto, ‘Esse Quam Videri’.  You were courageous. You were compassionate. You kept creative, and you stayed curious. And as the country moves tentatively out of lockdown, Truro School continues to provide academic and wellbeing support to all its pupils and staff as the post-Covid road is navigated.