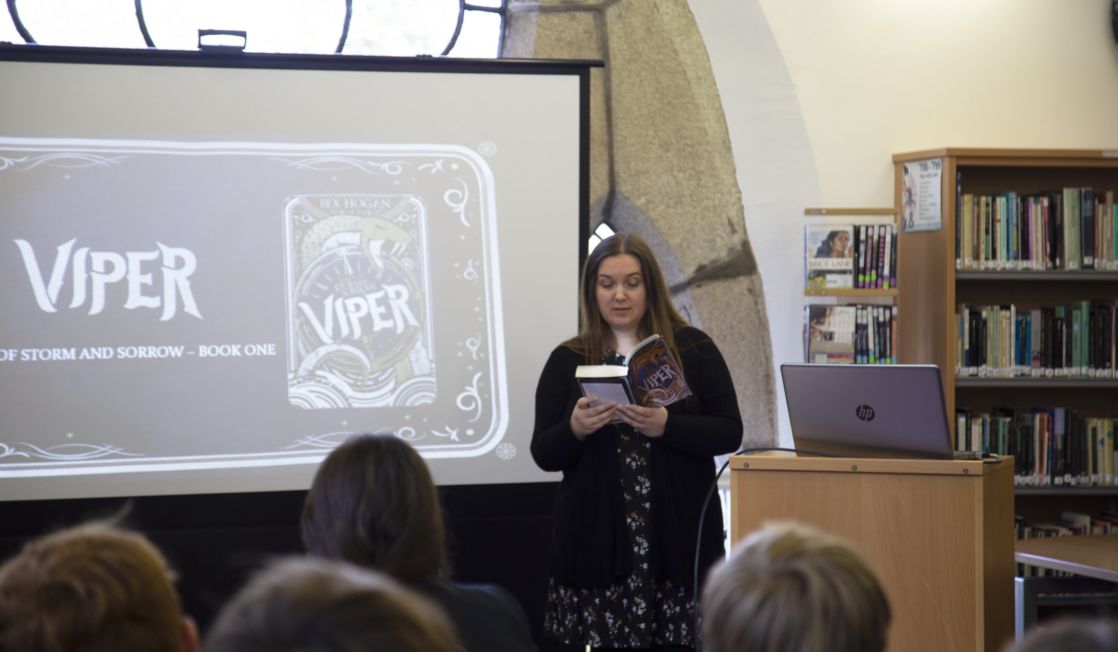 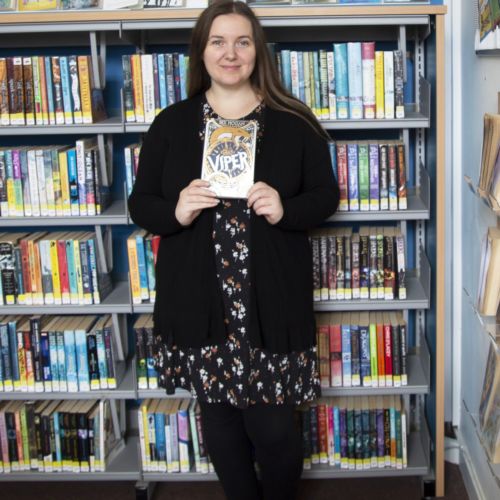 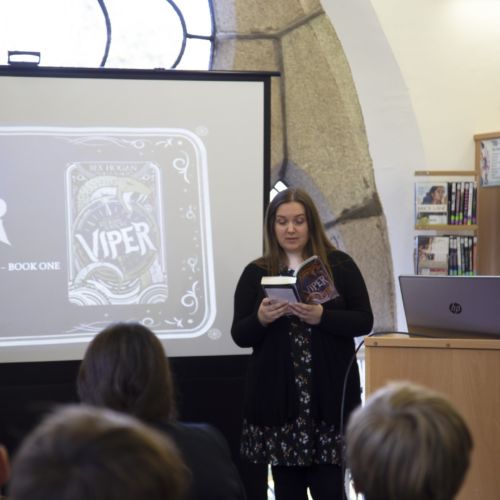 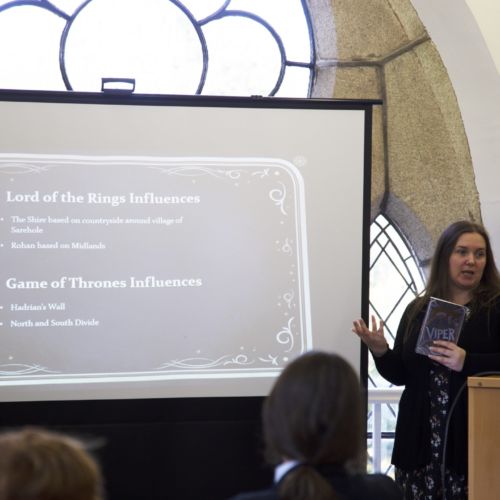 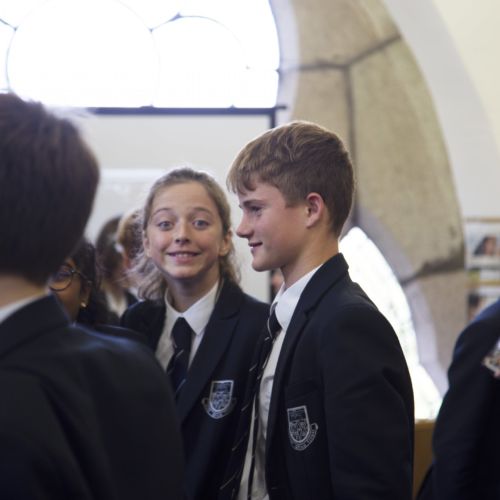 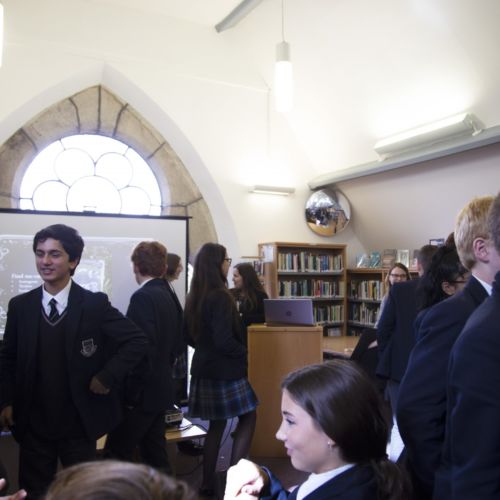 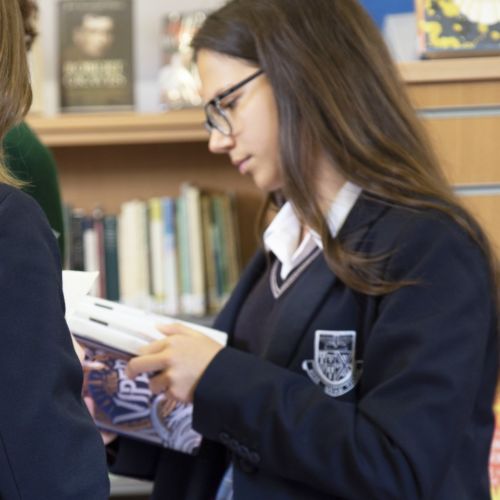 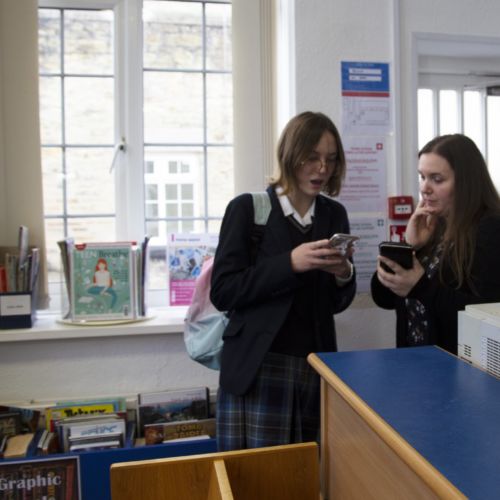 Author and Truro School Alumni, Bex Hogan, returned to Truro School before the half term break as she finished her promotional tour around her home county.

Pupils gathered in the library to hear about her debut book, Viper, which was released in April this year by Hachette Children’s Group (HCG). During the course of the day, Bex gave a talk about the process of becoming a published author, gave a creative writing masterclass, and an opportunity to buy her book. She also enjoyed a trip down memory lane as she was given a tour around the school grounds, where she said much has changed since leaving in 1999.

Viper is the first book of her trilogy ‘Isles of Storm and Sorrow’ with the second book, Venom, to be published next April, and Vulture, the final book in the series, to be published in 2021.

Bex’s idea for the book had an unusual beginning: ‘I was inspired by a dream that I had. A scene that is in the book still. When I woke up I thought I really need to know who these people are, what’s happened to get them here and what’s going to happen next, so I wrote the book. My imagination has taken on this dream to a whole other level’.

In her talk to the pupils, she explained that she drew upon the varied Cornish landscape for ideas of her island setting, and her family trips to the Isles of Scilly played a heavy role in creating her fictional isles.

The new author explained that it took a long time between writing the first novel to getting a publishing deal.

She said: ‘It took six manuscripts and seven years before I signed with an agent, and then another year to sell Viper. There were times when I questioned whether I should give up, and wondered if I was ever going to make it. But I kept persevering and weathered the storm. It was definitely worth all the heartache when I saw my cover for the first time’.

She offered some wise words to aspiring novelists: ‘It’s hard to give advice for a career that is reached by many different paths, no two writers seem to have the same story. But I would say to keep writing, keep reading, and repeat. Write for yourself first and foremost, write the book you would want to read, and never give up. You’ll need patience, determination and resilience by the bucket load’.

Bex explained that reading was a big part of her childhood, and encourages children and teenagers to pick up a book.

‘It’s a wonderful escape from the pressures of life. As a kid, coming in to a library and getting away from school, or whatever was happening in my life, I could just hide away and go on an adventure. I think kids need that now more than ever. There’s so much pressure on them’.

During her whistle stop tour of her home county, Bex also visited independent book shops that stock Children and Young Adult, including Liskeard, Lostwithiel, Penzance, and St Ives, before visiting Waterstones in Truro.

Bex now lives in Cambridgeshire with her husband Joe, and two daughters Kara and Odette and is keeping busy with promoting Viper, editing book two in the series and writing book three.