A talented team of Truro School Sixth Formers performed very impressively and with great enjoyment in the 2020 Independent Schools’ Mock Trial Competition at the weekend.

Preparations began before Christmas, with a fascinating morning spent at Truro Crown Court, observing trials and getting a sense of the practicalities of the roles of different legal personnel. We were lucky enough to have time to chat with two judges in court, later followed by tea and Q and A back at school with D.J. Jonathan Stone.

The competition required a team of four barristers (Alex, Hettie, Sam and Finley), four witnesses (Charlotte, Holly, Jenny and Jess) and a clerk / usher (Scarlett). Detailed files for two cases were sent, to be combed over for key details and weaknesses by the barristers and for the statements to be learnt by the witnesses. One case involved a hair stylist accused of money laundering and the other an attack with acid by a party gatecrasher. We were very fortunate to be joined by parent-barrister Mr Philip Lee for some coaching sessions too – providing fascinating insights into style and techniques for making arguments clear and memorable to the Jury.

On the day, the team was fantastic – well prepared and absolute naturals in the courtroom, thriving under the pressure applied by the teams from five other schools from across the South. Our barristers were sharp and incisive with both statements and cross-examinations, and it was wonderful to see them grow in confidence and authority as the day progressed. Our witnesses really threw themselves into their roles and were utterly convincing – particular fun was had with the hair and make-up of the hairdressers! They stood out for their absolute confidence in their statements when under cross-examination and both barristers and witnesses showed real mental agility in their ability to respond spontaneously to the challenging format, the imposing surroundings and the presence of real judges.

After fantastic performances in the first three trials of the day, it was thrilling to find we had made it through to the Final with just one other school. The standard of the teams at this stage was exceptional, ramped up by the added pressure of all three judges adjudicating: after a closely fought battle, the team from Jersey College was victorious.

It was an absolute pleasure to oversee this team of motivated, independent-minded and thoroughly charming students. Firm friendships were made: two of our team have already received offers for places on Law degrees and, after such a challenging and entertaining weekend, I think there will be a few more applications in the pipeline! 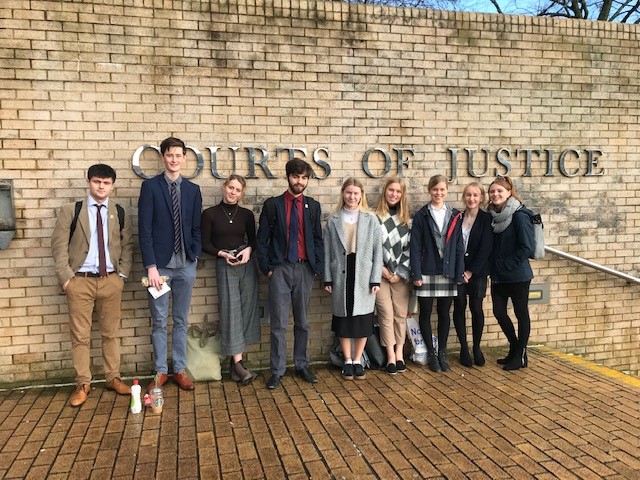