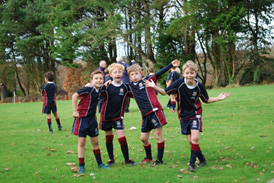 South West Under 10 and Under 11 Rugby Festival

Wednesday 14 November saw the return of Truro Prep School’s annual rugby festival. This year the festival was expanded to include Under 10 teams as well as Under 11. Two more schools entered this year with Shebbear and Polwhele joining previous entrants Plymouth College and Mount Kelly to make for an action packed afternoon of rugby.

The standard of rugby played during the afternoon was high with all schools entering into the spirit of teamwork, respect, enjoyment, sportsmanship and discipline. As with all fixtures at this age group, there were no scores for the matches and therefore no overall winner. Prizes were instead given for those children thought to be embodying the RFU’s core values the most throughout the festival.

Not only was the festival a fantastic opportunity for 40 children to represent the school in competitive sport, it was also a fantastic vehicle to bring together the Truro School Prep and Senior School pupils. We look forward to building upon this year’s success to produce a bigger and better festival next year.

On Wednesday 21 November Truro School Prep travelled to play Exeter Cathedral School, having previously only faced them in tournaments attended by both schools; this was a new fixture for Truro. After a morning of mixed weather, the boys arrived in Exeter to perfect playing conditions and took full advantage of it.

The Year 5 team played a thoroughly entertaining match against closely matched opposition. Strong ball carries and abrasive tackles were the theme for this match with both sides showing an ever maturing understanding for the game.

The Year 6 team’s match was not quite such a close run affair; Truro School Prep scoring 2 tries in succession from the opening kick offs.  This attacking flair and precision play continued throughout the match, with all players executing coaching points of footwork before contact and low tackle height with seeming ease. Exeter Cathedral School picked up their play in the second half of the match and forced some good defence from the Truro School Prep team. It was fantastic to see both the high standard of play set by Truro School Prep and the sportsmanship and integrity displayed by the players on and off the field, well done to all involved!