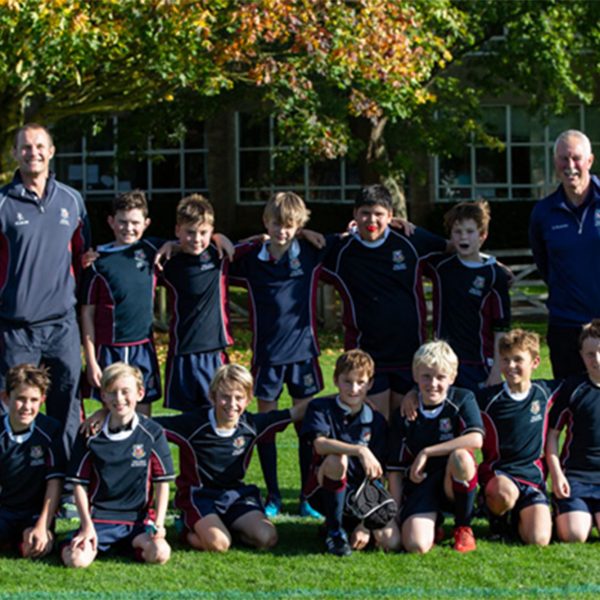 On Saturday 20 November, 11 boys chosen to represent the Prep School made the long journey to Millfield School to compete in their Under 11 Saturday Festival. The competition was of a very high standard and it didn’t take long for the players to realise they needed to be playing at the top of their game if they were going to be competitive. This is exactly what they did; with slick attacking play and ferocious defending, the team made a great account of themselves. The boys played three matches against Llandovery College, Kings Worcester and finally Millfield School and had a thoroughly enjoyable time. Every single player played with heart, spirit and skill; they could not have given more if they tried. Following the match all players were presented with a t-shirt by England Under 18 and Bristol Bulls player James Dun; Fred Friedericksen collected the award for player of the day whilst Rory Sim received the award for embodying the core values of the RFU the most throughout the festival.

Thursday 8 November saw Truro Prep take two teams to compete in Mount Kelly’s annual Under 9 Rugby Festival. In fine and dry conditions, Truro Prep, as ever, looked to play an attractive and fast flowing style of play. Both teams faced some high-quality games against St Peter’s, Mount Kelly, Stover, Trinity, St John’s, Plymouth College and Exeter Cathedral School.  Aleksander Fedorchenko and Felix Beresford were chosen as players of the day for their respective teams although every player contributed with fantastic tackling and evasive running.  15 players represented the school on Thursday and should all be very proud of their efforts.

On a wet and windy Friday afternoon, Truro Prep played host to two Claire’s Court Under 11 teams. With conditions that made us question whether the game would go ahead, both sides produced some outstanding running rugby. The pace of the game was fast, with Claire’s Court getting the better of the early exchanges, very efficient handling producing two tries in quick succession. Truro hit back with some excellent play of their own, deceptive footwork and strong leg drive in the contact, producing a try for the hosts. The high tempo continued throughout the match, with the more experienced and drilled Claire’s Court eventually coming out on top.