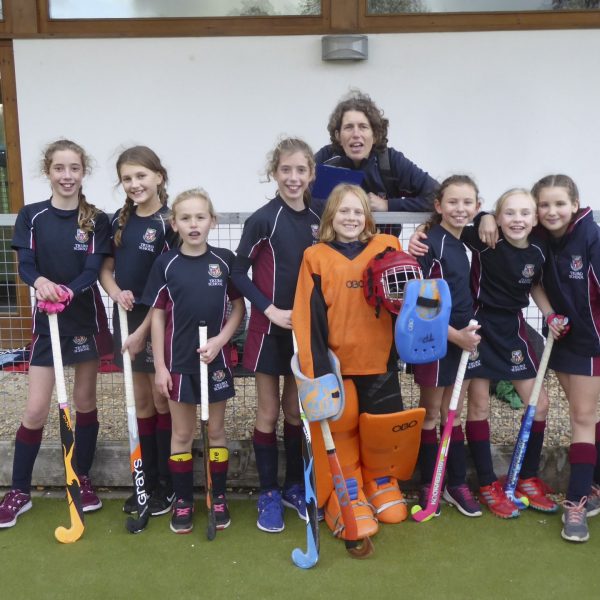 ‘A fantastic result – runners-up in their afternoon group’

Following an early start, we arrived at the gatehouse to Bryanston School. The Satnav still said five minutes until we reached our destination. It was right – their driveway is impressive!

Luckily, for the 20 schools attending, the rain clouds cleared. In the morning session, changes to the order of play meant that our group reduced to four schools, giving us three games of 14 minutes each.

Our first game was interesting – Westbourne House were a strong team, who scored several goals against us and later went on to win the tournament. Our other matches against Dumpton School and Sherborne Prep were much closer affairs but it was clear that we needed to play the ball wide and attack the ball more.

After lunch, the competition continued for all teams (whose earlier results determined their afternoon grouping). Despite losing their initial matches to Castle Court and Ballard School, the team grew in confidence and determination.

Success quickly followed in the form of some incredible goal scoring from Alice and Sophie. The team went on to win their matches against Hanford 3-0 and Yarrells 2-0. This meant that they came runners-up in their group in the afternoon (out of five schools).

Under 11 Hockey vs Claire’s Court School

Heavy rain and strong winds forced us to reconsider playing this hockey fixture outdoors. The 50mph winds battered us as we arrived at the Sir Ben Ainslie Sports Centre but fortunately some last-minute negotiations had come up with the perfect solution – indoor hockey in the SBA.

Mr. Frewer had it covered. We reorganised our 18 players into three mixed ability teams, while our touring team – Claire’s Court – had two teams. We followed his order of play and ten games later the teams had all played each other.

The children had a brilliant afternoon of indoor hockey. It’s a fast game…

Claire’s Court staff were delighted and have emailed their feedback:

“I would just like to say thank you again for a lovely afternoon of hockey on Friday. Our girls thoroughly enjoyed themselves and have certainly improved over the weekend. They had such a fantastic tour, so thank you!” (Katie)

Thank you, as ever, to all of our parents for their support at this fixture.