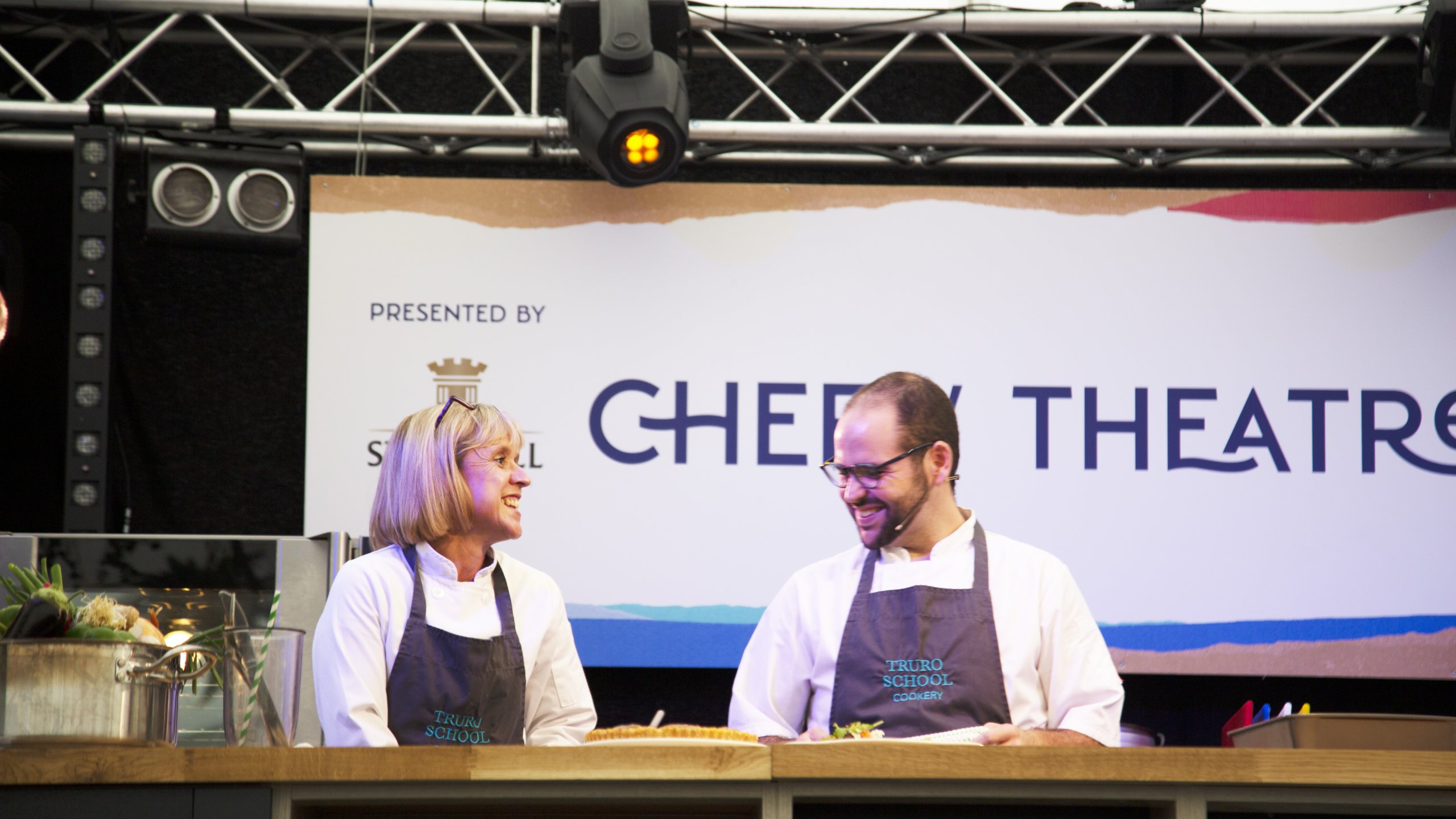 The air was filled with aromas in Truro City Centre this weekend as the city hosted the Truro Food Festival.

Lemon Quay was full to the brim with food stalls, and sizzling smells enticed the crowd their way. There was food from everywhere you could imagine; Greece, Germany, Thai and Spain were just a handful. Large pans were cooking bright sauces on mass giving off their spices, and colourful ingredients were displayed in large barrels. For the thirsty, pop up bars and coffee huts were abundant.

The Cornish Food Hall hosted all the popular Cornish produce and brands, and people were squeezing their way through to sample the rich cheeses, the freshly baked bread, or the strong rum and brandy.

In the main marquee, where the demonstrations were being held, Maria Taylor, Head of Truro School Cookery took to the stage along with chef Manuel, at 1.00pm.

The seats started filling up as people filtered in to watch, and the boarders also came along to support.

Maria and Manuel put a menu together of Cornish Mackerel with roasted roots, goat’s cheese and pomegranate for the main course, and for dessert, a baked pear and almond frangipane tart.

The menu chosen was a reflection on the courses at Truro School Cookery which prides itself on using seasonal local vegetables, recipes that can be easily adapted and recreated at home, and creating dishes that are fun, tasty and colourful which hit the spot.

While overhead cameras filmed the action, Maria talked through the process and engaged the audience with wise words, emphasising that cooking can build confidence and can transform lives, and doesn’t have to be a chore that leaves the cook feeling frazzled.

As the demonstration came to a close, the room warmed up as the pans fried the fish and the oven baked the tart.

To find out more about our Cookery School, take a look at the website. 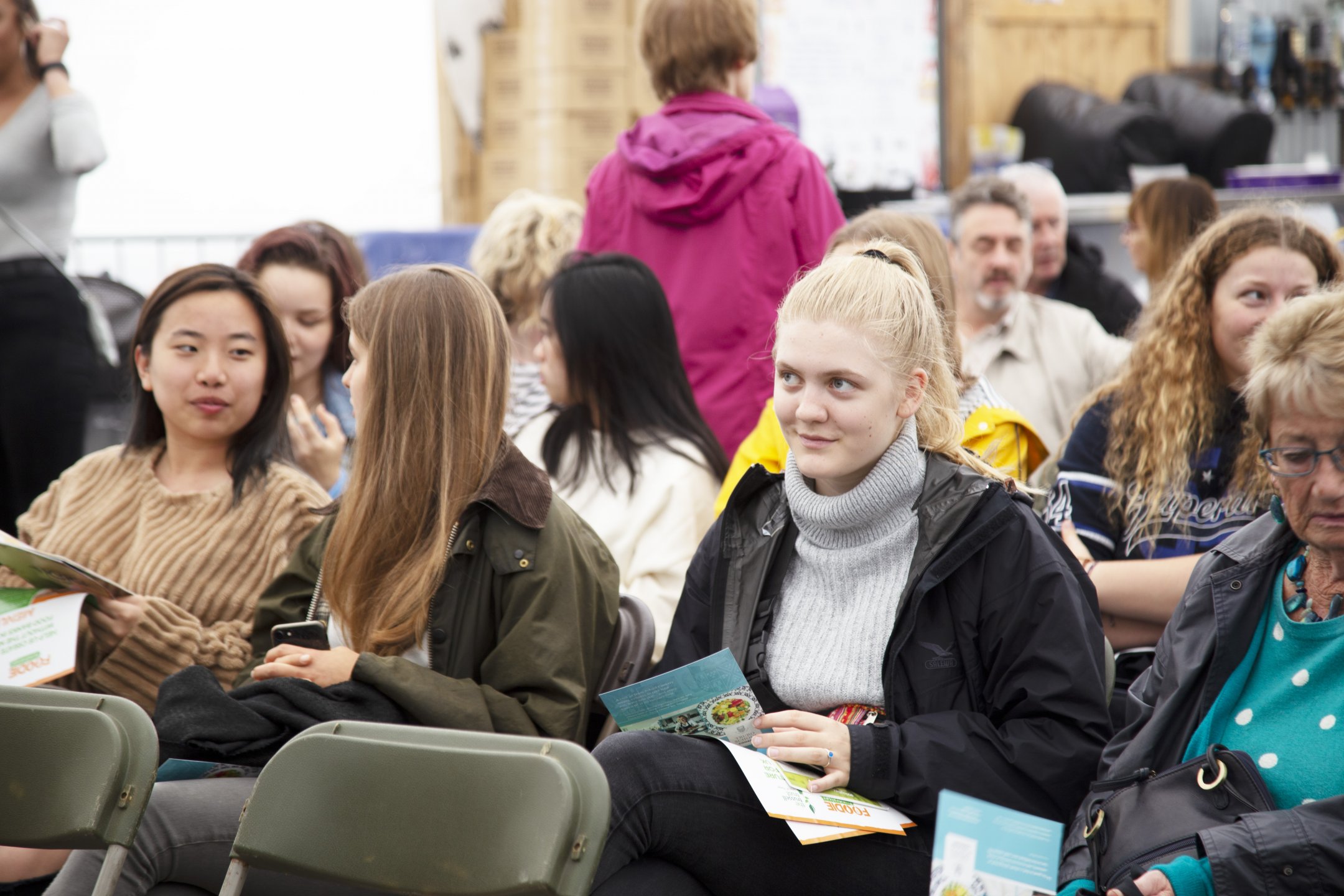 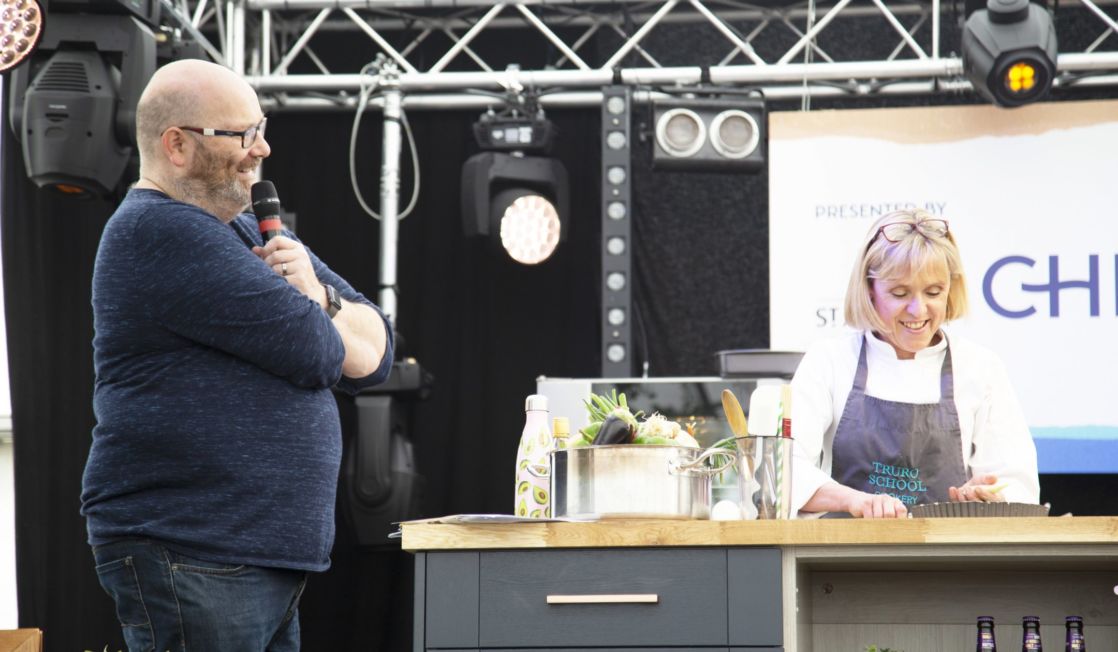 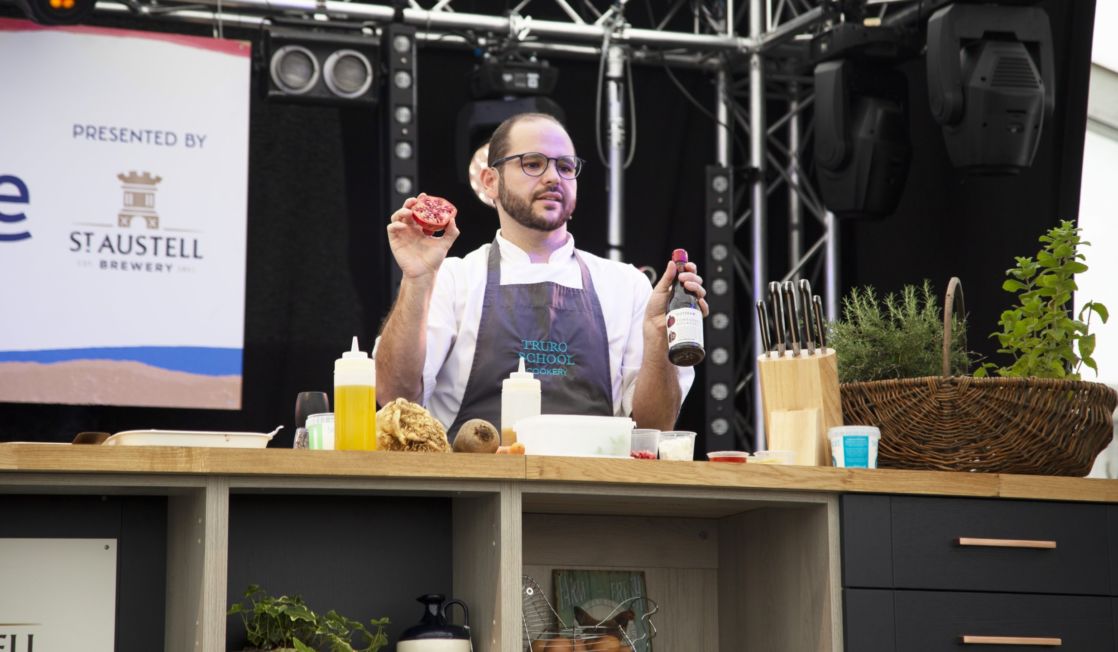 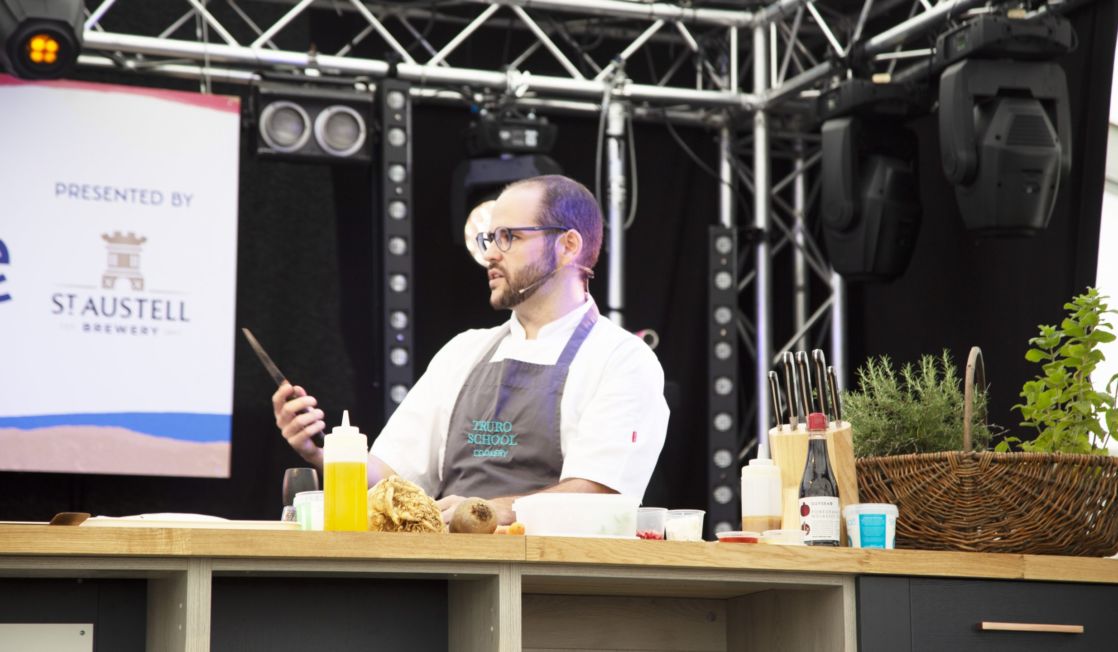 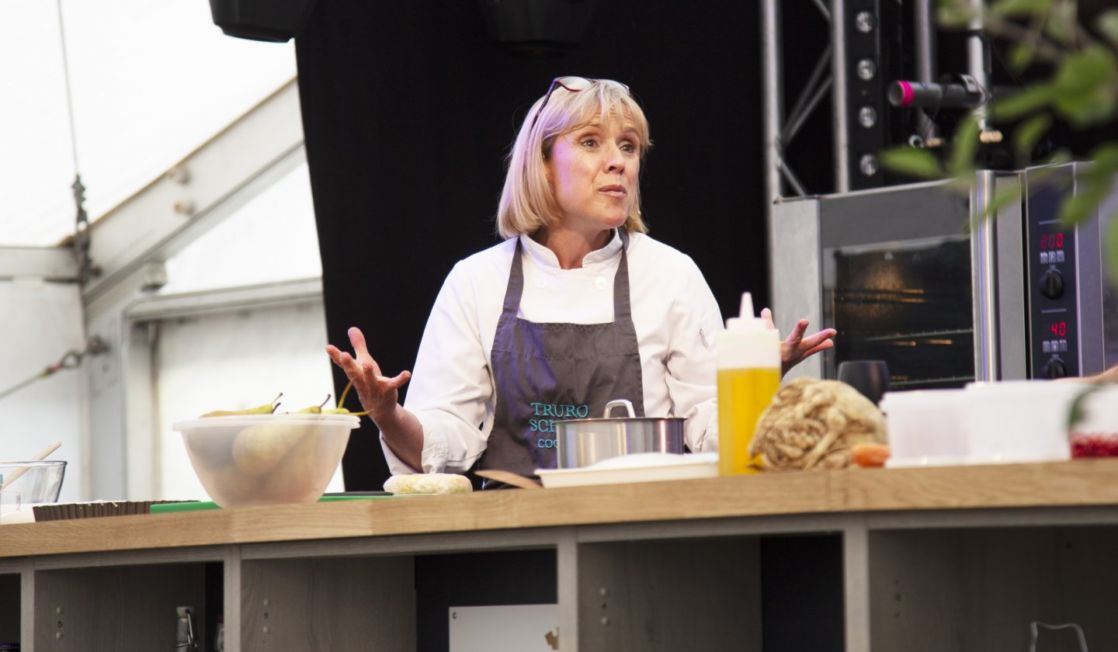 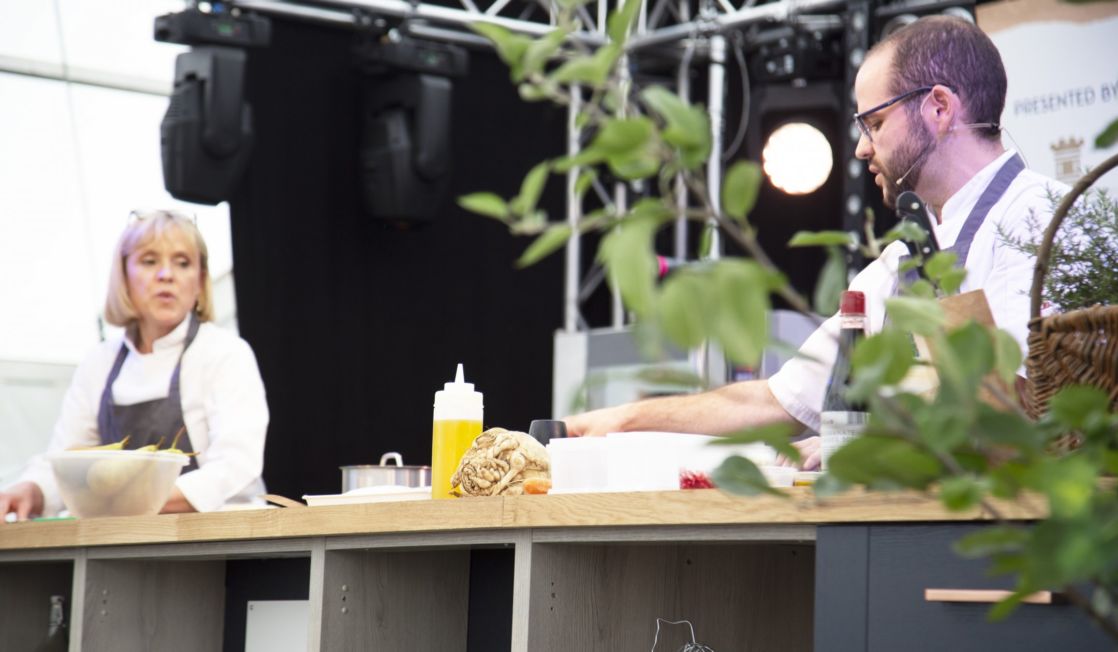 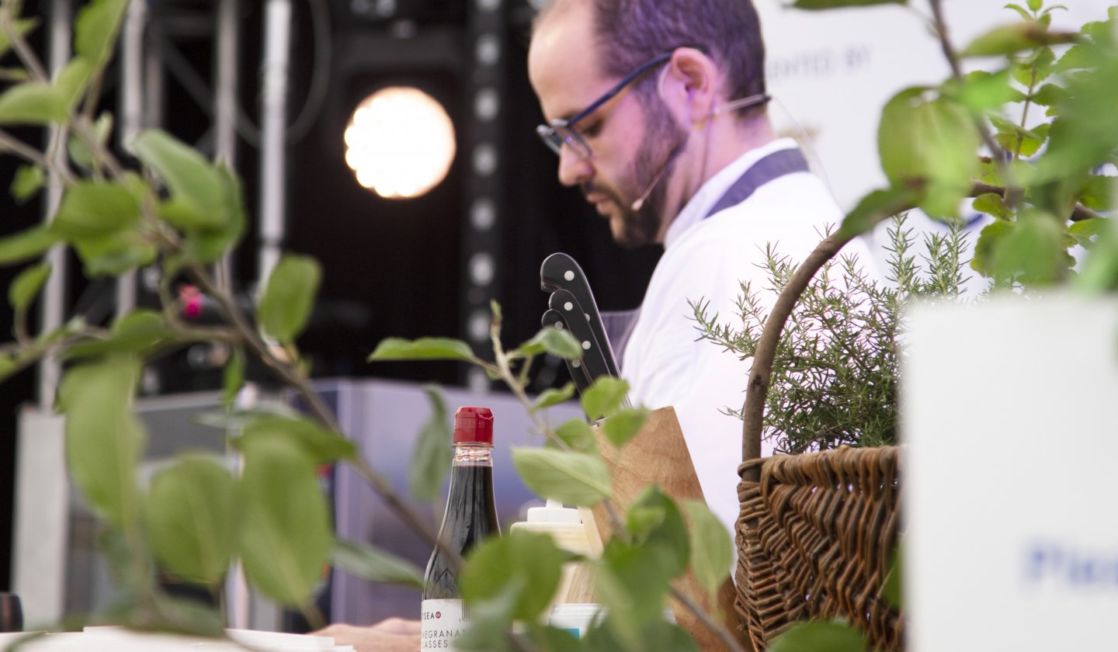 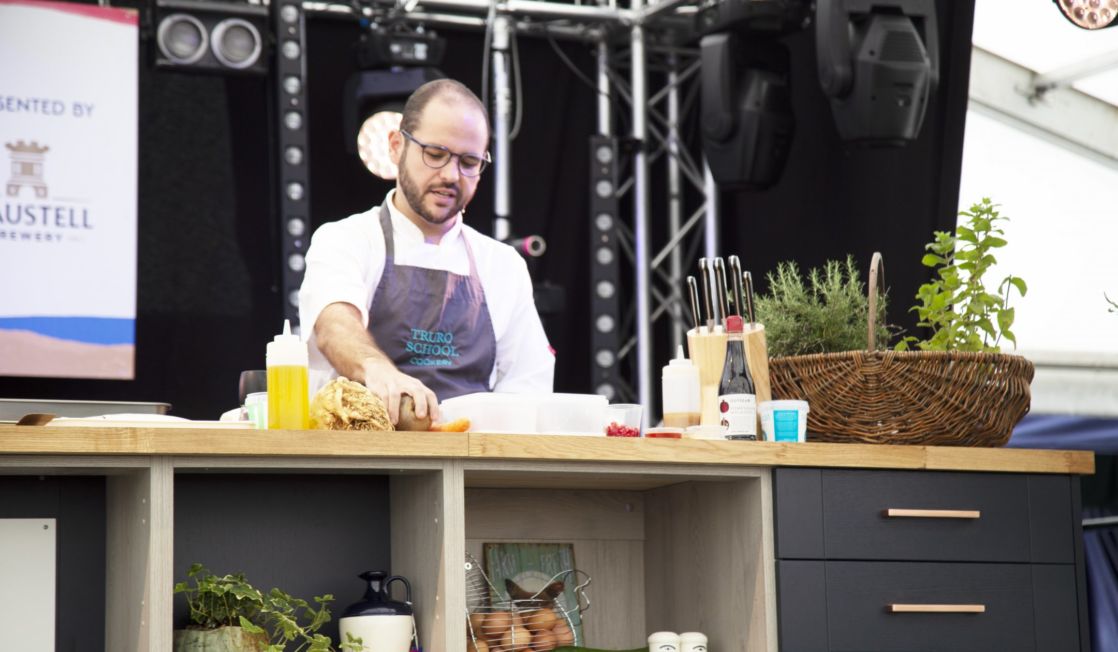 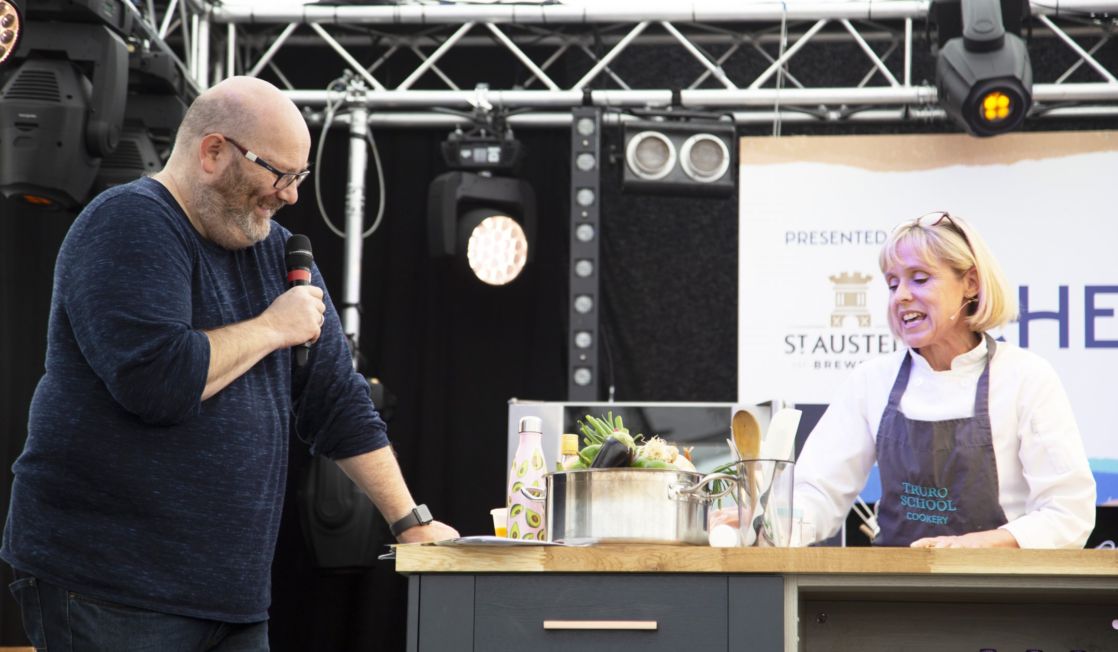 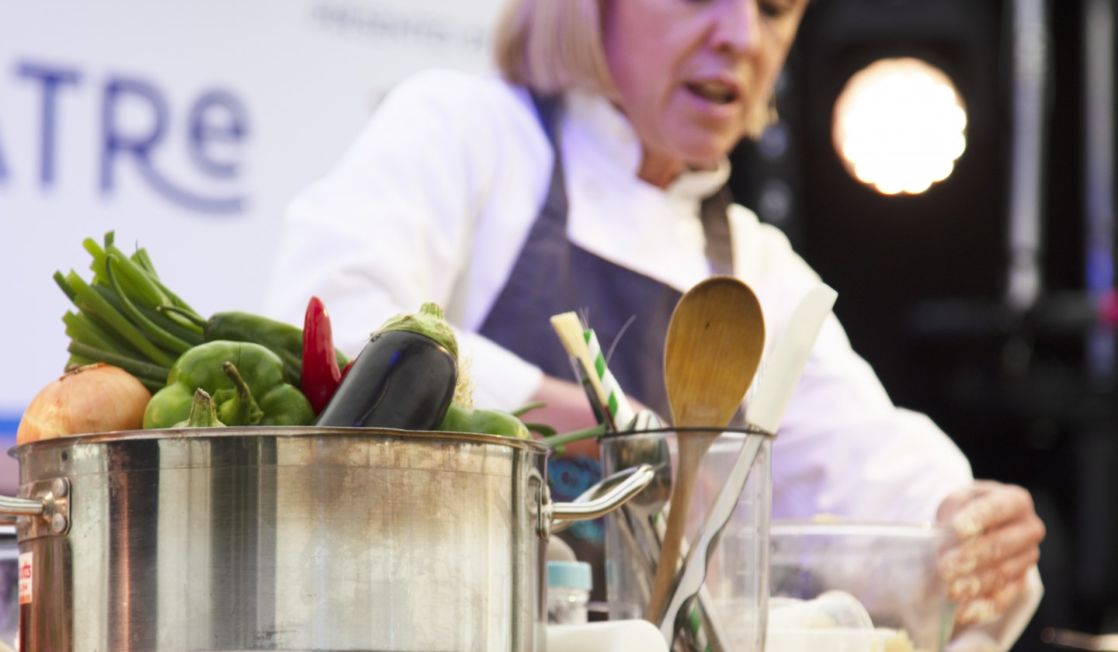 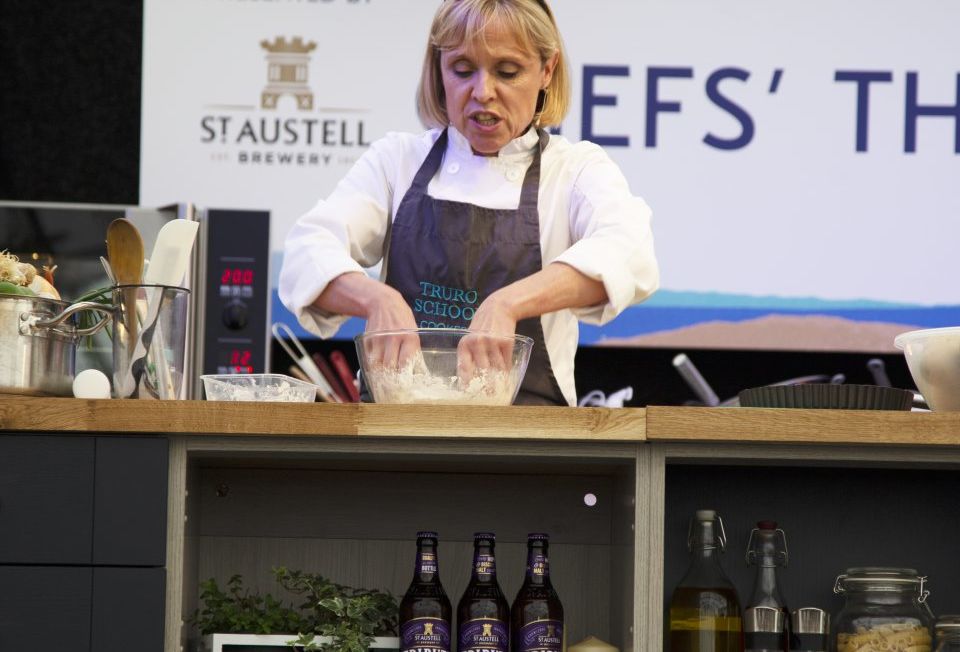 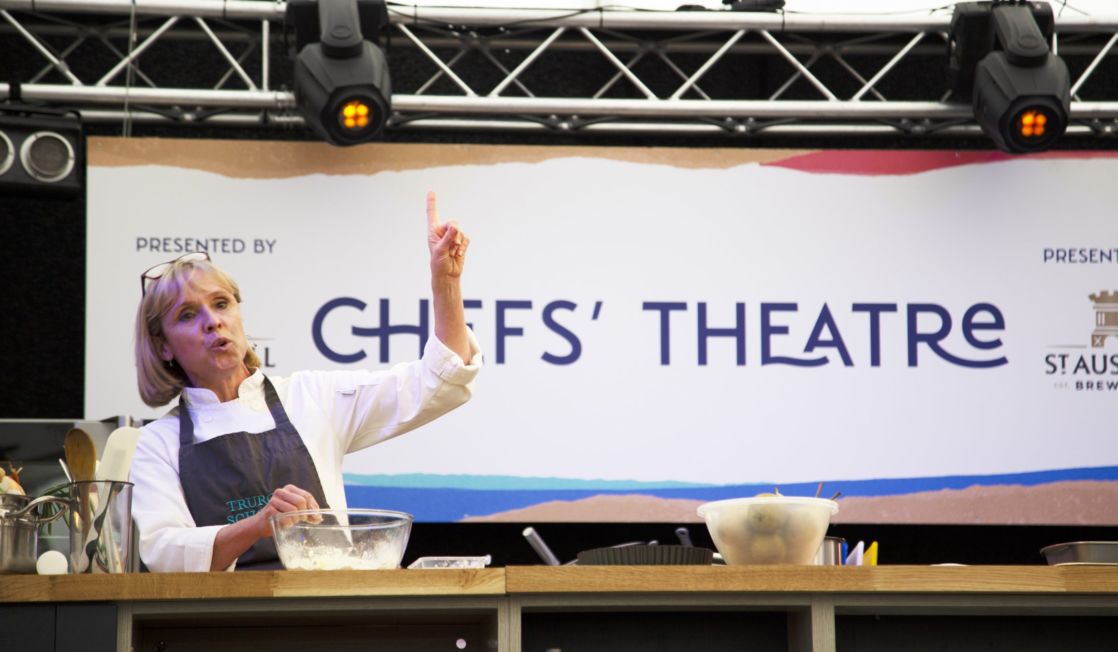 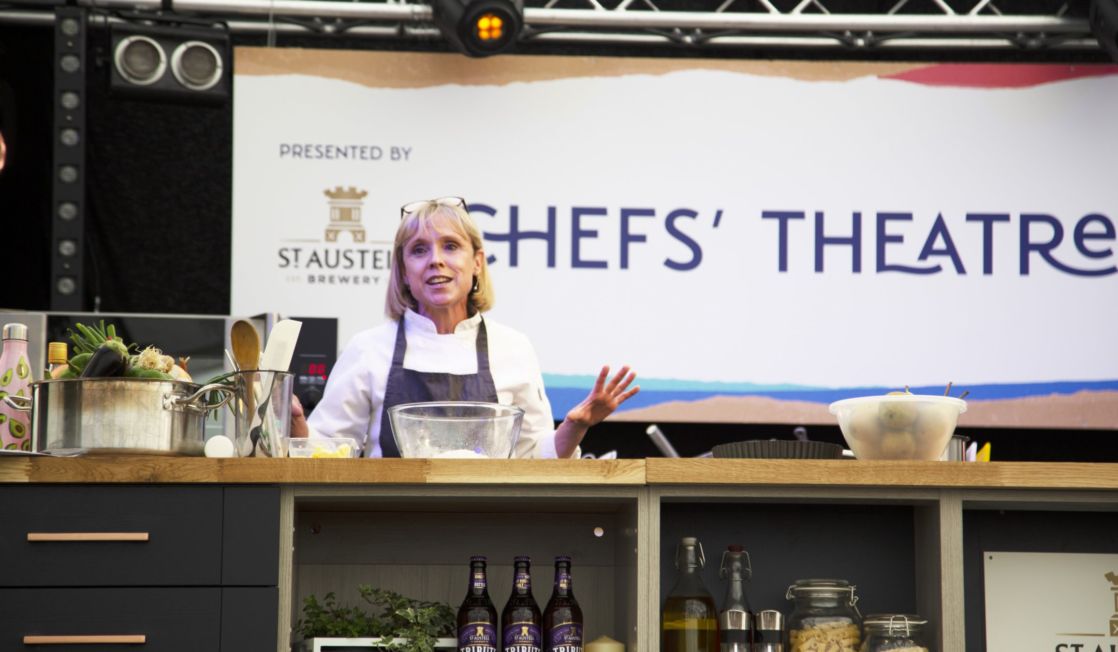 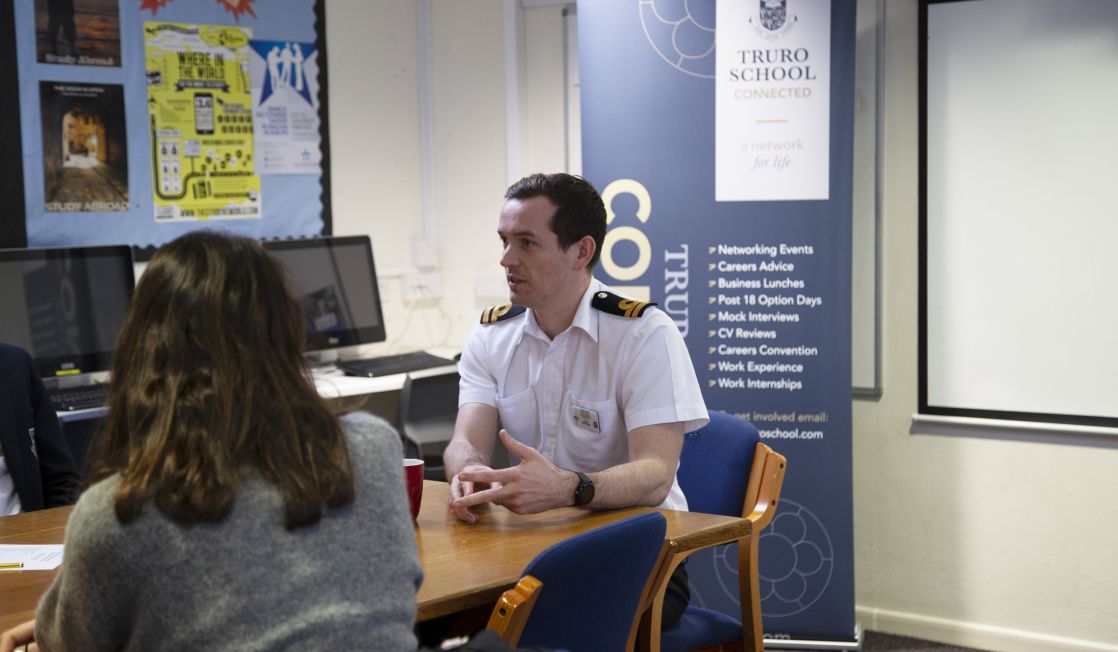 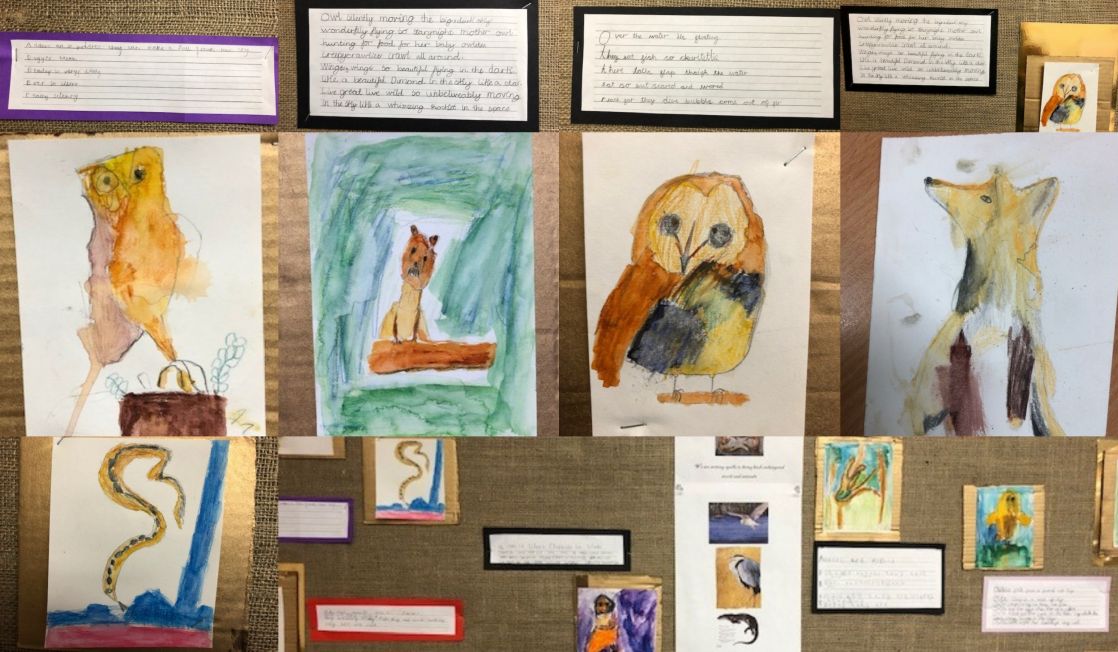