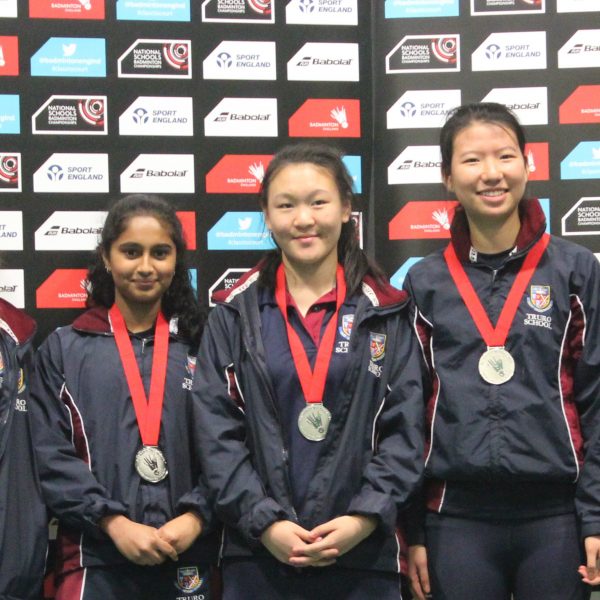 Hosted on Saturday 28 April at the National Badminton Centre in Milton Keynes, the team faced fierce competition against the champions of nine different regions from across the country.

The annual competition regularly sees over 40,000 competitors and over 8,000 teams entering, making it one of the biggest championships of its kind in Europe.

Truro’s first pool match was a nail-biting battle with Nonsuch High School, who had already beaten Outwood Academy in the first match of the day – making the match a likely pool decider.

Melissa Lin opened the play in a singles match with a tough game against a strong opponent, narrowly losing 18-21.

In the first doubles match, Maddie and Nila were unable to prevent the opposition pair establishing a good lead early on. However, after some tactical alterations at the change of ends they grew in confidence and got back into contention, finally losing 18-21.

This left the girls 0-2 down and needing to win the three remaining games to keep their medal hopes alive. Beckie Bailey, playing singles at number 2, came onto the court with confidence and dominated, comfortably winning the game bringing the overall match score back to 1-2.

This gave the team the lift they needed and with the early losses firmly behind them. Melissa and Maddie then won their doubles game to level the overall match score to 2-2, taking the match to a deciding game.

It was time for Beckie and Nila to step onto the court. The girls took an early lead in the deciding game with an assured, confident performance. The girls maintained their lead throughout the game and gave Truro the overall match victory 3-2.

The girls then played Outwood Academy in the knowledge that a win would secure a medal place. The girls played well in all the games in this match, dominating the court well to secure a 5-0 win and progress to medal matches.

The first match in the medal group was a tough encounter against Aylesbury High School. In a tight game to open the match, Melissa played some outstanding points, but was just edged 18-21.

Maddie and Nila took an early 5-0 lead in their doubles, but the Aylesbury pair quickly fought back to turn it into a game of small margins with the lead repeatedly changing. With the match poised at 20-20 and sudden death, the Aylesbury player made a strong return to win the match.

Beckie faced a difficult singles opponent who had excellent overhead play enabling her to win this match taking Aylesbury into an unassailable 3-0 lead.
With a point to prove, Melissa and Maddie showed resilience in the next doubles match. Their points demonstrated some fantastic team work and they won the key points towards the end of the match to secure a 21-18 win.

Nila and Beckie worked hard but lost out to a very strong attacking Aylesbury pair with the match finishing as a 1-4 loss.

The final match of the day against Chelmsford County High School would decide the bronze and silver medals. Melissa had a super game against an opponent ranked 4 in England.

The girls pushed each other all around the court in some physically demanding rallies of a really high standard, but Melissa could not quite pull off the win.

A fresh Tung stepped on court to play with Maddie in the doubles and their attacking play enabled them to level the match at 1-1.

Beckie faced another strong player with an effective smash, which again meant that she was edged out.

Melissa and Maddie employed tactics well to dominate their doubles to level the match at 2-2.

With the silver medal then resting on the final game, Tung and Beckie complemented each other well to maintain a small lead throughout the game and held their nerve to secure the silver medal.

The success of the girls would not have been possible without the outstanding coaching and commitment of Mr Morcom and Mr Hunt to badminton at Truro School over a number of years.

Mr Morcom, Truro School’s Badminton Coach, was thrilled with the result and said,

“Achieving a silver medal at the national championships for two years in a row is a phenomenal achievement and the girls should feel extremely proud of their performance”. 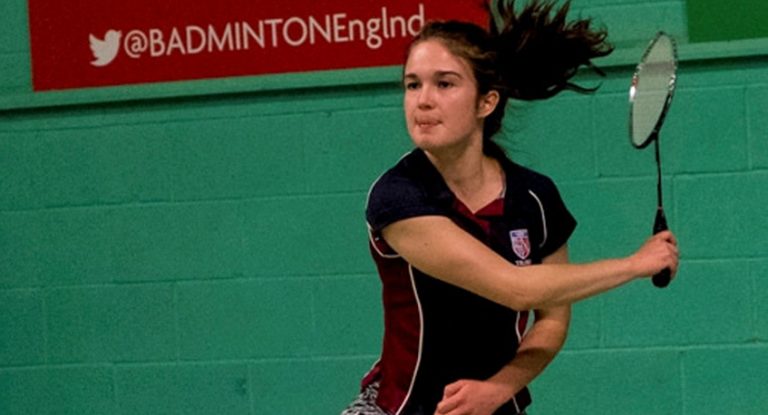 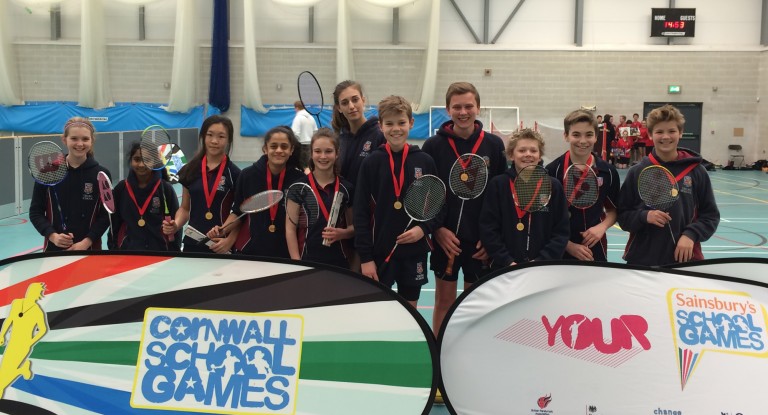