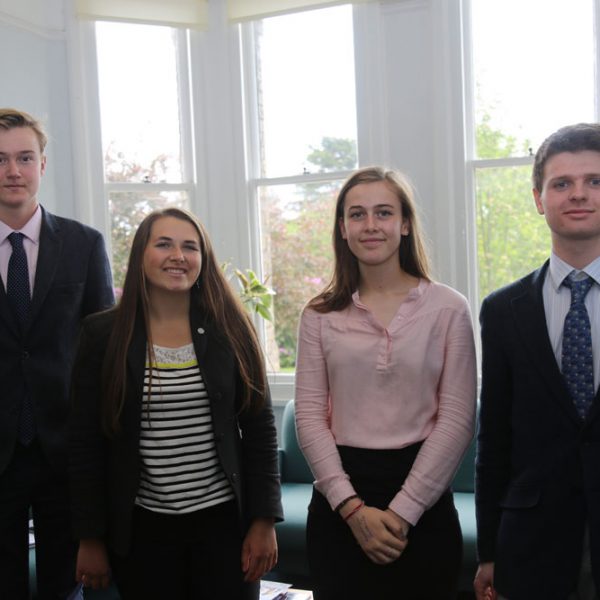 Sixth Form students Caitlin Maxwell, Henry Balkwill-Ruddick, Chloe Dobbs and Alex Boote have been busy preparing themselves for the finals of the Debating Matters Nationals this weekend in London.

The team, who successfully made it through to finals after winning the South West Regionals back in April against Cardiff and previous winners, Exeter College, have been meeting up whenever possible amidst their AS and A Level exams to rehearse and plan their debates ahead of the three-day final competition.

After being encouraged to join the debate team by Ms Selvey, who has supported the team through each stage of the competition, the students have said that the experience has left them with valuable skills for their futures.

With Chloe looking to go into studying Politics, and Henry moving on to study Philosophy, Politics and Economics at University College London next year, it’s a great opportunity to develop new skills.

Chloe said: “I think debating really helps you become mentally sharper and to think on your feet, you have to respond to the question straight away so you do learn to come up with answers to things quickly.”

Having fiercely debated on Sharing Economy, Health Monitoring Devices and Trigger Warnings at the Regionals, the four students recently received their final motions to debate.

Alex and Chloe will be competing in the second round, arguing for ‘Monuments to controversial historical figures should remain’ and Caitlin and Henry will compete in the third round arguing against ‘Social media sites should filter out fake news’.

Headmaster Andrew Gordon-Brown, says: “Extra-curricular clubs are a big part of life at Truro School and our students grow so much from their experiences outside the classroom. It’s fantastic to see our debating team doing so well and making it to the National Finals. What super preparation for life after Truro School!”

The final rounds take place from the 30 – 2 July at the Museum of London and are open to the public.