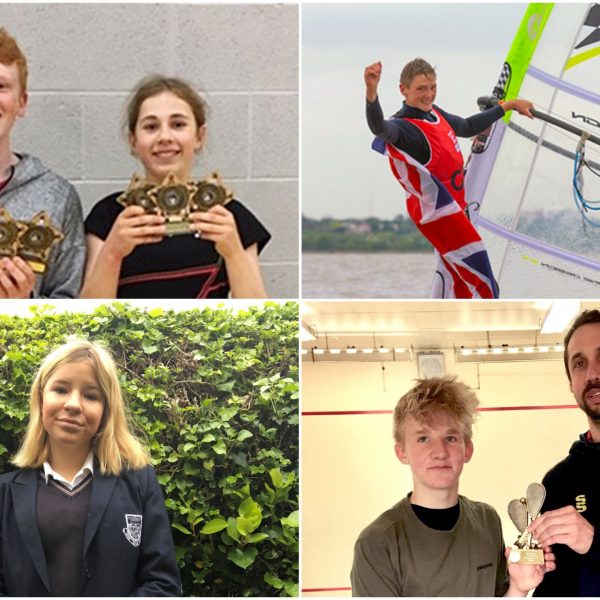 Our sporting stars have been triumphing again this week with fantastic achievements in squash, badminton, swimming and windsurfing.

In Windsurfing, Finn Hawkins has been selected to represent Great Britain at the Youth Sailing World Championships at the prestigious regatta being held in Gydnia, Poland.

Windsurfer Finn Hawkins tasted international success when he took bronze at the 2018 Youth Olympic Games in Buenos Aires, Argentina, and is targeting another medal.

Finn said “I have just come back from the RS:X European championships in Palma where I confirmed my selection and I am very excited to be representing Great Britain at the Youth Worlds in Gydnia.

“This event will be a similar format to the Youth Olympic Games so I feel this has prepared me well and I hope to repeat my success, however, I know the competition will be very strong.”

Students, Joanna and Ollie are pictured with their fantastic sweep of trophies at the Cornwall County Under 16 Badminton Championships, after claiming victory in the singles, doubles and mixed titles!

In squash, Louis Murray won his first BU17’s competition, with the open at Winchester, which took place over the weekend. Despite being a couple of years under the age limit, Louis battled magnificently to emerge as the winner; playing 4 best of 5 matches throughout the day. This news comes in shortly after the school’s unprecedented double finals result in the National Squash Championships. Thank you to everyone who has been supporting the squash teams, it is fantastic to receive such positive feedback from students, parents, staff and squash professionals alike, including these lovely comments:

Daryl Selby (ex world no. 9): “Great to see the Truro School team doing so well on the national front.. to hear our visit had a positive impact is fantastic”

Simon Parke (ex world no.3 and Squash TV commentator): “a fantastic achievement for Truro school and well done to the team”

Peter Marshall (ex world no.3): “many congratulations to the school team”