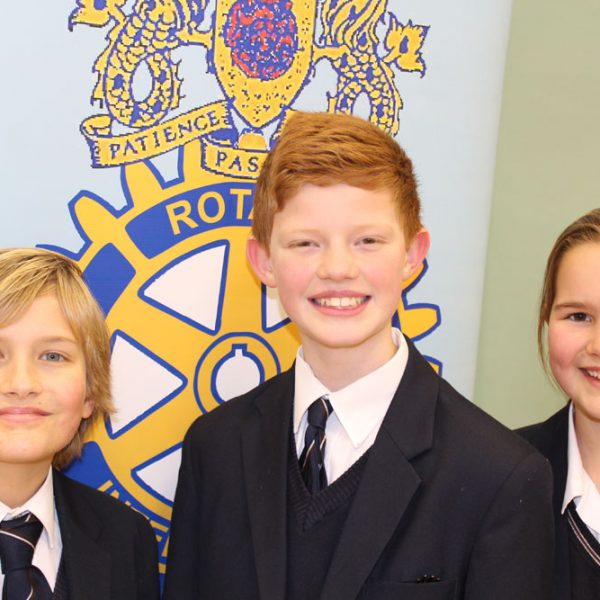 It is quite an occasion – and definitely not for the faint-hearted. Each team had to cope with the following challenges: green, amber and red lights (to keep the teams on time), a packed audience and a table full of adjudicators. Furthermore, the speakers all had to show spontaneity and quick thinking in their response to an unseen question, from a member of the Rotary Club.

Chosen topics ranged from ‘What gets you further ahead in life – beauty or brains?’, ‘Boredom – can it be prevented?’, ‘Why don’t politicians answer the question?’ and ‘Are rules made to be broken?’

Our team, consisting of Ben P (Chairperson), Perry (Speaker) and Lucy (Proposer) did an absolutely fantastic job, speaking fluently on their chosen topic of, ‘Is technology taking over our lives?’ Starting the competition off is never easy but they showed real composure in the delivery of their different roles.

Feedback from the adjudicators was encouraging and wholly positive, in particular the judges praised their teamwork. Ben made a very good impression and was commended for his overall control of the team – he had a great smile and he introduced the topic well. Perry was praised for the structure of his balanced speech, and his interesting content. The judges liked his manner, stating that he made good use of his prompt cards and used his free hand naturally to expand on points.  Lucy’s clarity of voice was praised, as was her teamwork. The judges liked the way in which she referenced Perry’s speech, and thought that she responded nicely to Perry’s answer about his preference of video game (Angry Birds…apparently!) Sounds good? It was!

Eventually, following feedback to all of the competing teams, the judges gave their overall decision. Polwhele House School were declared the winners with ‘Are rules made to be broken?’ and Archbishop Benson also went through to the next round with, ‘Why don’t politicians answer the question?’