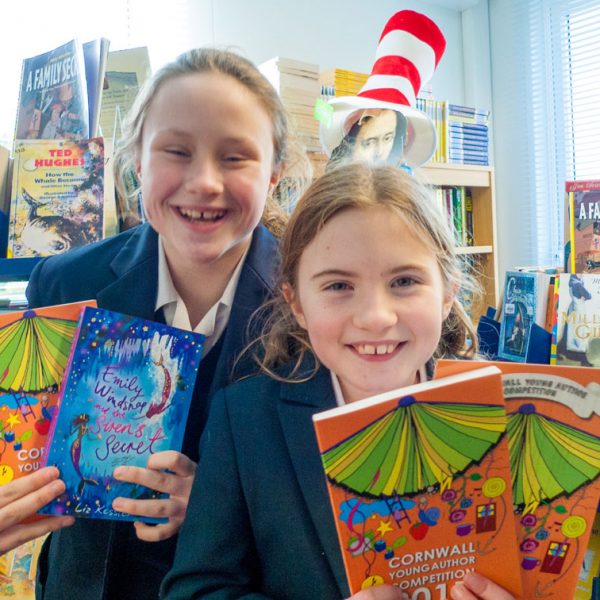 What better way to celebrate World Book Day than getting your own short story published!

Rosie entered a short story titled ‘The Man That Walked Alone’ and was chosen by the judging panel, including Cornish children’s author Liz Kessler, to win Silver. Rosie’s short story has now been published in the anthology by TJ Ink and she was also awarded with a signed copy of one of Liz’s books.

Well done also goes to Year 5 pupil, Amelie, who’s short story, ‘The Two Girls And The Candy Elephant’, has also been published in the anthology.

If you are interested in purchasing a copy of the published anthology, they are £5 and can be requested by contacting TJ Ink.

‘The Man That Walked Alone’ by Rosie

Every day an old man used to walk up the steep road out of St Pirans village with his dog. A strange figure with a crooked back that made him walk in an awkward way, he had a gnarled walking stick that was taller than his head. He had old, grey clothes that matched his small amount of hair and a wrinkled face. Every day when Mother and I waved from our window, he didn’t even glance up at us with his expressionless face.

The dog, a black and white collie always by his side, was quite the same character as the man. An old, unhappy creature, that didn’t care one bit about what was happening around him. But if you looked close enough you could see that both the man and the dog cared deeply about each other, the man looked at the dog with a glint in his eye and you could tell that the dog loved and trusted him.

But one day something changed. The man was alone, we might have thought that the dog just ran on ahead but the man was gloomier than ever. For the first time the man’s face did have an expression, misery.

We felt so sorry for him that the next day Mother asked him in for a cup of tea. His answer was half hearted, but he agreed.

Whilst she put the kettle on, I was left awkwardly with the man. I was unsure of what to say but to fill the silence I asked tentatively,

“Where is your dog?”

His head drifted downwards and he had tears in his eyes. Mother entered, looked at the man and then scowled at me. I felt terrible.  Brushing past me she walked over to comfort him. To be truthful I knew that there were only two possible options for what had happened, either the dog had run away or had died.

Not knowing what to do next and feeling guilty for causing the upset, I wandered over to the window seat and sat down.  Glancing up I couldn’t believe my eyes, our apple tree which had been full of fruit started to wilt and the apples rotted one by one and fell to the ground.

“Come and look at this!” I announced

Mother and the man rushed over.

“What is it?” queried Mother, her voice trailing off as she saw the tree.

“Oh No!” said the man worriedly.

We were sat down now around the table, Mother and I staring at the man inquisitively.

“Well,” He began. “When I was a young boy my parents died in an accident, so I had to go and live with my Auntie in Cornwall. I was very upset, naturally, but I like to keep my feelings to myself and bottled up all my sadness and anger. One day odd things started happening around the village.  The wheat wouldn’t grow, the chickens stopped laying eggs and the cow’s milk went sour. I blamed myself, my sadness seemed to effect everything around me. People started pointing at me and even my Aunt began to look at me with a worried expression. I felt I had betrayed them and so I ran away.

My dog and I found each other on the streets; we grew so close I didn’t ever want to let him go. We managed to survive and eventually by doing odd jobs I found a place to stay in the village.

It was just him and me, we didn’t need anybody else. We took long walks around the lanes and were easily pleased. A week ago my dog died. I have continued to walk the same paths as I did every day, in an attempt to stop my sadness coming back but it isn’t working, these happenings are not the first.

As he spoke we all looked at the apple tree in the garden, it started to bloom again and get new leaves. We were astounded.

“I know why!” I cried, “Because he talked to us about it! He’s opened up to us Mother and perhaps it has helped his sadness in some way.’’

From then on the old man and the little girl met at 4.30.He would drop in on his walk and Mother would make them tea.  They talked about all sorts of things, including him getting another dog, and he eventually agreed that sharing feelings certainly did make sad things better.