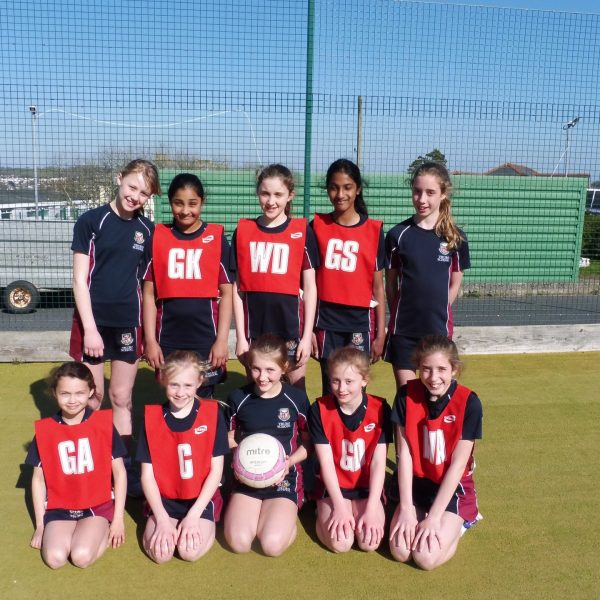 On Wednesday 16th January 2019, all the girls from Year 6 travelled to Truro School to play netball against their Year 7 squad. Although the girls were nervous to be playing others from a year above, after a cautious start they soon got into the flow of the game. As they relaxed, they started linking their passes down the court at speed, putting the opposition under pressure.

Jasmine and Daisy made some brilliantly timed interceptions, just before half-time, which stopped Truro from increasing their lead. In the latter stages of the game, we started to make better use of the space on court. After some quick passing from Sophie, a lovely goal from Ankita was their reward.

Kyla was named player of the match by Truro School, but all girls should be incredibly proud of how well they played as a team at this early point in the season. Thanks to Josie Macdonald for her help with transporting the girls, and to all the other parents who came along to support.

Both of our netball teams played really well in terms of defence, we just struggled to get it into the circle. A positive start to the season – with lots of things to work on!

On Wednesday 6th February 2019, we hosted Polwhele House for an afternoon of U11 netball.

Due to the recent weather, the girls have had a lot of cancelled matches recently, so it was really nice to get outside and play some netball.

The girls got off to a brilliant start with Ankita and Alice showing great communication in the circle to open the scoring. They are becoming a great attacking partnership.

Polwhele started to find their rhythm in the second quarter, but Jasmine’s close defending and a great interception from Sophie, helped us stay in touch of their score and built our confidence up.

The last quarter saw the game pick up its pace and a few errors from both teams reminded us of the importance to slow down and think about our passing.

The final score was a draw, a good result for two teams who played really well and learnt a lot.

On Friday 15th February 2019, selected pupils from Year 6 represented the school at the area High 5 netball Qualifier at Penair School. There were seven teams competing, each playing each other in a bid to qualify for the Peninsular finals in March.

The Truro Prep team played some fantastic netball, showing great versatility in the changing positions required for the High 5 game, alongside excellent teamwork and sportsmanship when off the court.

Ankita’s shooting was consistently strong, and Dexter proved to be a solid defender, making some brilliant interceptions and regaining possession at key times. Sophie and Jack showed great ability to pass accurately and create space, meaning the team were able to control most of their games and threaten others defence.

By the end of the day, we had scored 52 goals and conceded 5, making us the overall winners and qualifying us for the next round. It was a great day in some glorious sunshine and I look forward to the next round.

On Thursday 7th March, the Year 6 High 5 netball team competed at the Peninsular Finals, held at Penryn College, having qualified back in February.

Truro was pitted against some strong opposition in the group stages, and knew that only their best performance would get them into the final.

The team played brilliantly in their opening few games with Daisy, Alice and Jack proving to be excellent shooters, whilst Dexter, Sophie and Kyla kept the defence strong. Our ability to play across the whole of the court, meant the opposing teams struggled to defend our passes, and our quick turn of speed allowed us to control most of the games.

Winning all of our group matches meant we earnt a place in the final, and a chance to play Threemilestone School for the overall title. The team remained focused and controlled, playing some of their best netball – keeping the ball in possession and taking their time to ensure they only passed to a player in space.

When the final whistle blew the team had not only won the tournament, but also the opportunity to play for the title of county champions at the Cornwall Games in June 2019.

On Wednesday 27th February 2019, all the girls in Years 5 and 6 travelled to Mount Kelly to represent Truro Prep at netball.

The two Year 6 teams faced strong Mount Kelly teams with both games proving to be fast paced and packed with close encounters. In the first game, Elsie worked hard to create space, and her ability to link the ball with Eva and Meredith created some lovely fluent play from Truro. The Mount Kelly shooters were a strong pairing but Ava worked tirelessly to keep them under pressure. A beautiful goal from Eva at the end of the third quarter was well deserved and led to her being selected as player of the match.

The second game was a very closely fought match, with both teams passing the ball with fluency and power. In training, the girls have been working hard on finding space and driving towards the ball and they put it all into practice to show dominance in the third quarter. Some brilliant shooting from Alice, and some well-timed interceptions from Myla, meant the game continued to flow and a 5-all draw at the end was a well-deserved result for both teams, with Ankita being selected as player of the match.

The Year 5 squad of girls played a well contested game against the Mount Kelly team and showed great improvement in their passing and movement. Imogen, Beth and Farrah all scored fantastic goals and Harriet helped to control the game from the Centre position. The girls showed excellent sportsmanship towards the other team and were a pleasure to take on the away fixture.

On Wednesday 20th March 2019, the Year 6 girls hosted Plymouth College and Truro High School for an afternoon of netball. The Truro Prep girls got off to a strong start in their games, with Alice scoring some well pressured goals. The teams were evenly matched throughout forcing the girls to stay focused and think about the placement of their passing. Kyla and Celia made some brilliant interceptions at key points in the game and Elsie and Meredith worked hard to create space and attacking opportunities. Alice was awarded player of the match for her excellent shooting and constant pressure on the defence.

It was lovely to see so many girls out on the courts wanting to learn more about the game and improve their skills.

On Wednesday 27th March 2019, Truro High School hosted an afternoon of netball to celebrate the end of another successful season.

We took two teams of girls who all represented the school with an outstanding attitude, showing great gamesmanship towards all the other teams involved.

All teams in attendance got to play each other, so there were lots of opportunities to play and support each other, as well as practise the skills we have been learning throughout the season.

All the Truro Prep girls played well but a special mention must go to Ava for her tireless defending and Kyla for her brilliant intercepting. At the end of all the matches, our teams had finished in 6th and 3rd place overall, they were a pleasure to take to the event.

On Tuesday 29th January 2019, we hosted the Year 4 girls from Polwhele House School for an afternoon of netball.

All the girls from Year 4 played, showing an excellent attitude by supporting both their friends and the opposition, in a very well contested match.

Some great passing from Lilly and Clara allowed us to get the ball down the court swiftly. Furthermore, the shooting partnership of Lucy and Flo meant that the majority of the game was played in our third.

A beautiful goal by Flo meant we started the scoring, and some tight defending by Isabelle and Eva kept the Polwhele team from scoring.

This was a great start to the netball season for the Year 4 girls.

On Tuesday 5th February 2019, we hosted Polwhele House for an afternoon of netball, with all the girls in Year 3 representing the school. For many of the girls it was their first competitive game of netball which was very exciting.

After a nervous start, we started to link some passes down the court. Georgia and Millie showed excellent determination, continually dodging into space to help maintain possession. Marley worked really hard in defence to put Polwhele under pressure and limit their scoring opportunities.

All of the girls showed an excellent attitude towards the game and learnt a lot from the experience.

On Thursday 28th February 2019, Mount Kelly travelled to us for an afternoon of netball.

The Year 3 team were very excited to play and showed great enthusiasm towards improving their skills. They worked hard on moving into space, with Rosie and Millie dodging brilliantly to get the ball and maintain possession. We learnt through the match that we need to build on our defending skills, but it was a great game, with some end to end passing and lots of improvement.

The Year 4 girls have been practising their angular runs in training recently, and they put them into practice within the game, when trying to get free. Some great passing from Lily and Eva and a few interceptions from Clara and Flo kept the pressure on the visitors for the whole game, with both schools playing brilliantly as a team. Lily was awarded player of the match at the end of the game.

On Tuesday 19th March 2019, we hosted both Polwhele House and Truro High for an afternoon of netball for the Year 3 girls.

The girls have been working really hard in games lessons and training on their movement and passing, so it was a really good opportunity to put it all into practice.

Rosie and Millie worked really hard to create space in the centre third against Polwhele, creating lots of opportunities to get the ball into the circle. Frustratingly, the ball did not want to go into the net but this gives us something to work on for our next match.

Ellie-Mai proved to be a strong defender, working hard to intercept passes at every opportunity, earning her the accolade of player of the match along with Sanna.

Finally, against Truro High we were able to score, thanks to a brilliant shot from Sanna. The girls deserved this, as they had been linking their passes brilliantly down the court all game. I am really proud of the improvement the girls showed throughout all the games. 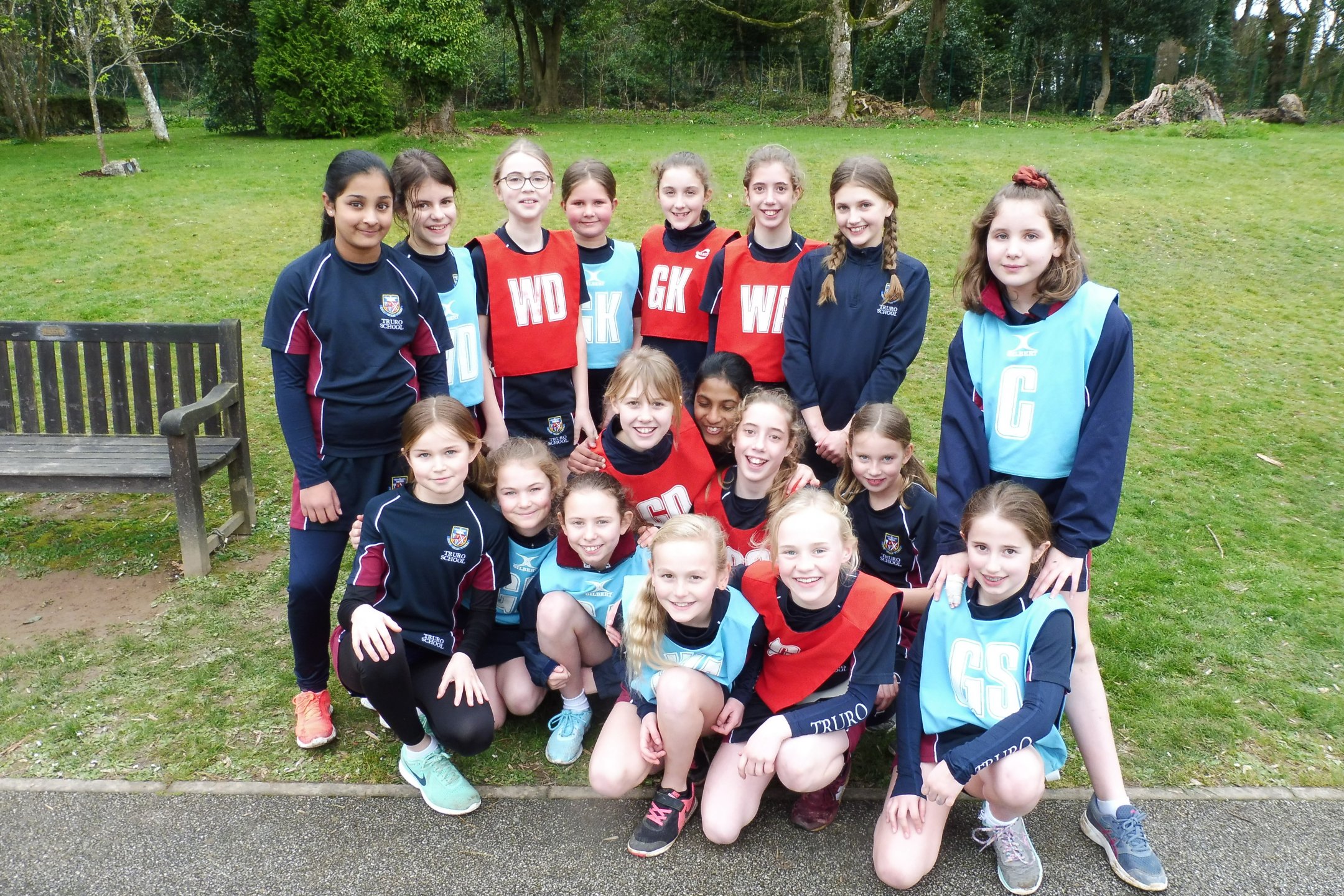 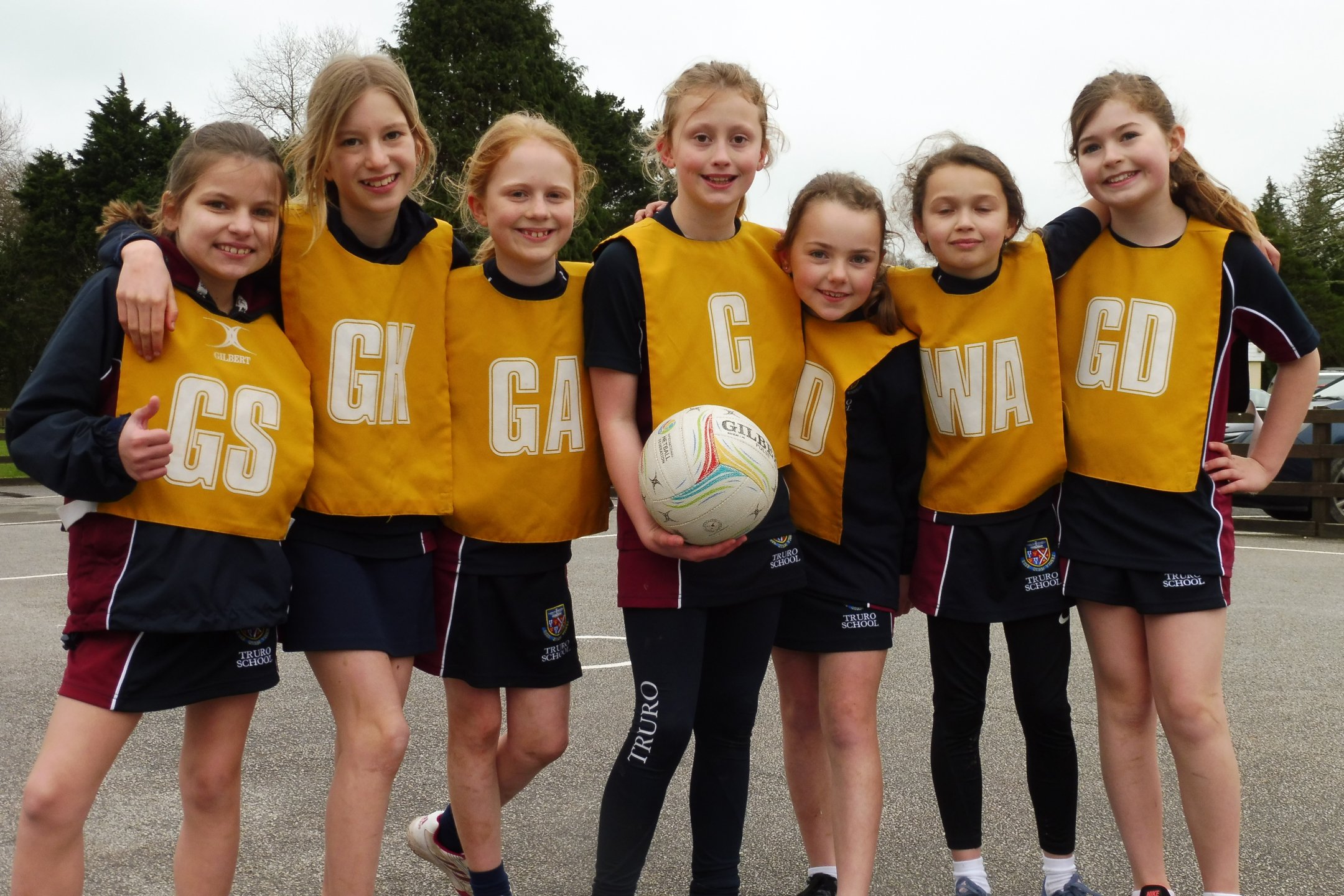 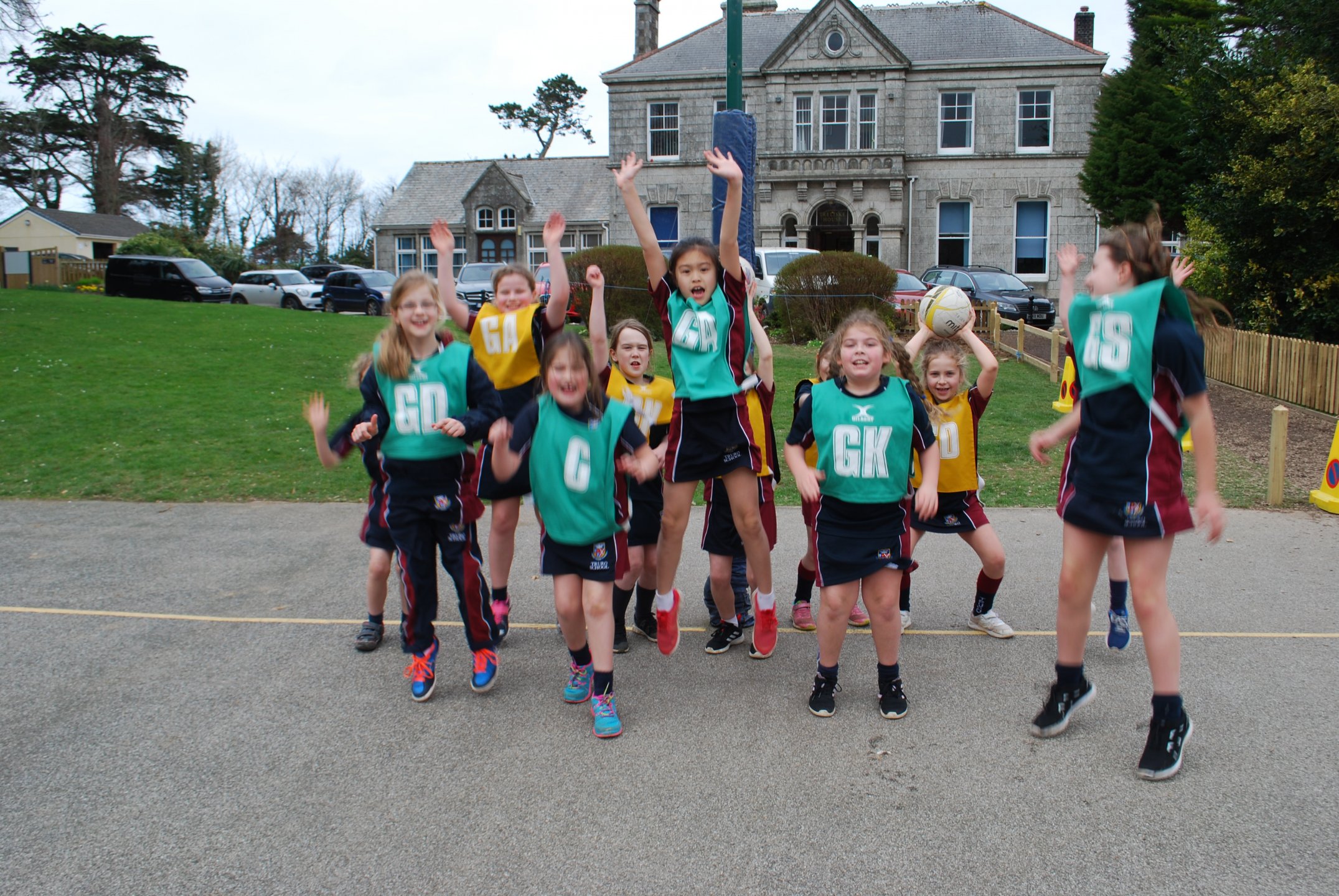 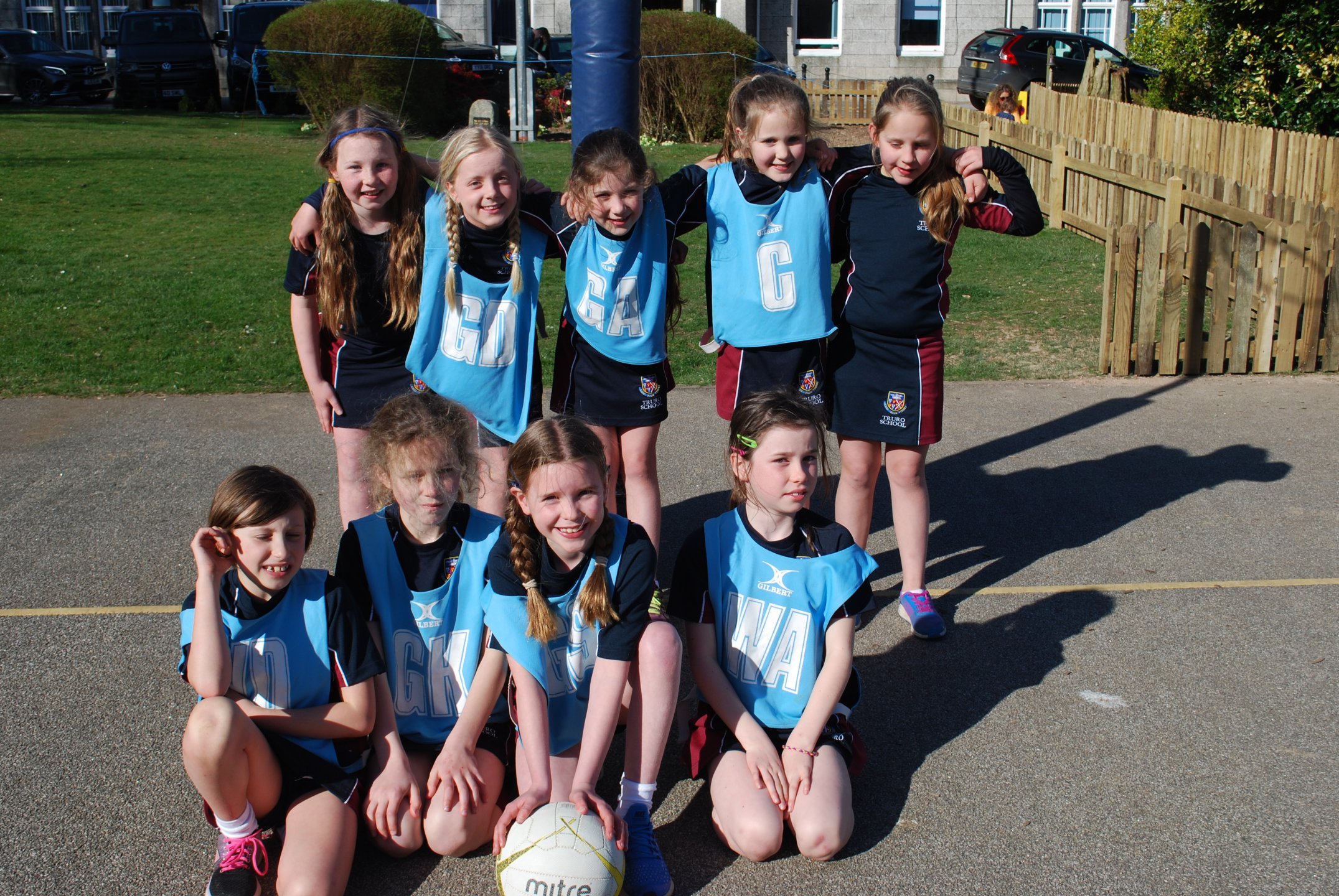 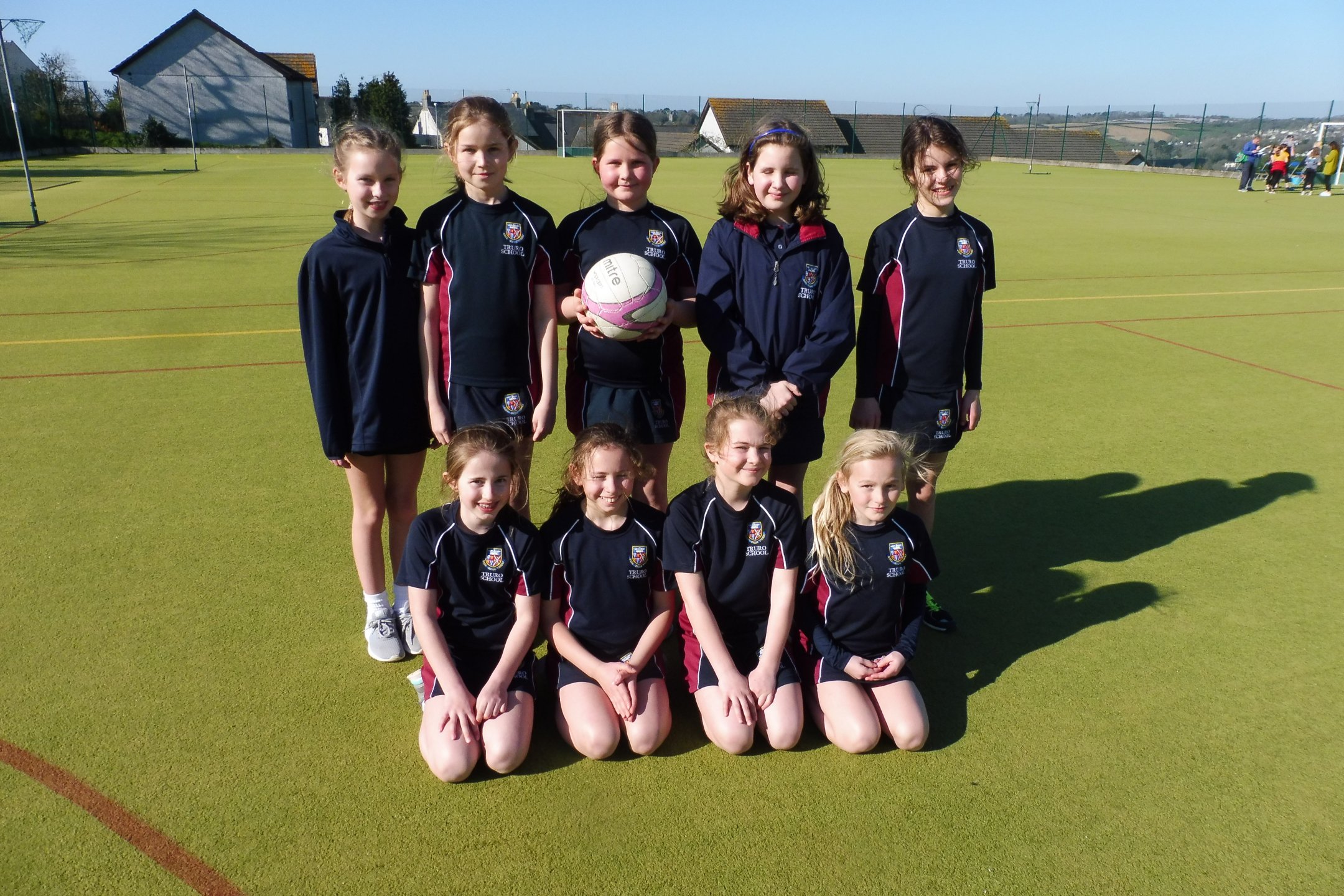