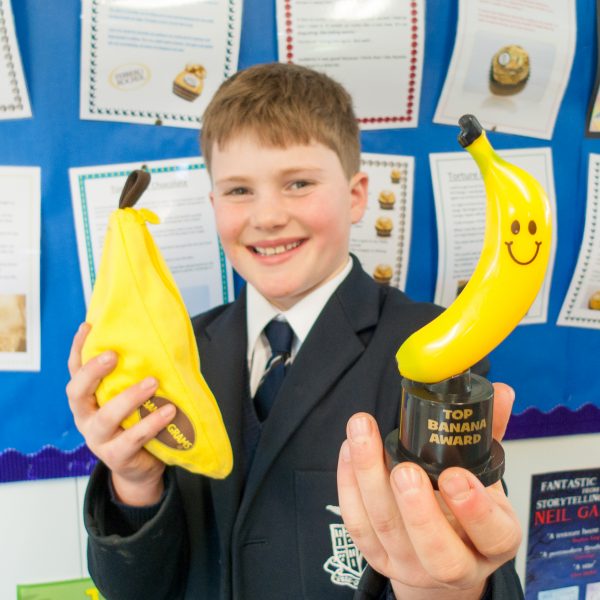 Congratulations to Year 6 pupil, Ollie, who was crowned ‘Top Banana’ in the Bananagrams Semi-Final School rounds!

The Bananagrams Challenge 2017 has proved to be a popular lunchtime activity at the Prep School, with 32 pupils across Years 3, 4, 5 and 6 taking part on Tuesdays, Wednesdays and Thursdays over the past six weeks.

The competition, which is running for the third time at Truro Prep, pits pupils against each other as they try to lock in and compile as many words as possible using scrabble style letter tiles. The game ends when there are fewer tiles than players left, with the first player to use all their tiles in an interlocking word grid shouting ‘Bananas!’

In this year’s competition, last year’s champion Perry dominated the earlier matches, leading to tense quarter final stages, whilst Ollie manoeuvred confidently in the other half of the draw.

In the semi-finals, Perry got off to a ripe start against Silas, creating 10 words in the first minute! However, on his 25th word, he became stuck with a bunch of unhelpful letters, Silas caught up and slowly levelled with just 5 minutes to go, placing his final tile to shout ‘Bananas!’ and win.

Ollie then went on to play Silas, starting quickly and putting together 20 words before grinding to a halt, however, Silas couldn’t quite catch up with his interconnecting words leaving Ollie as ‘Top banana’ and a place in the online finals.

The challenge is run by www.bananagramschallenge.co.uk and the winner of the school level rounds goes on to compete online in the national round, competing against pupils from other schools. The top 12 players of the online finals will then travel to London in April to play the live Final which will leave one winner with the coveted ‘Top Banana’ crown.

Good luck to Ollie as he progresses to the national online finals!