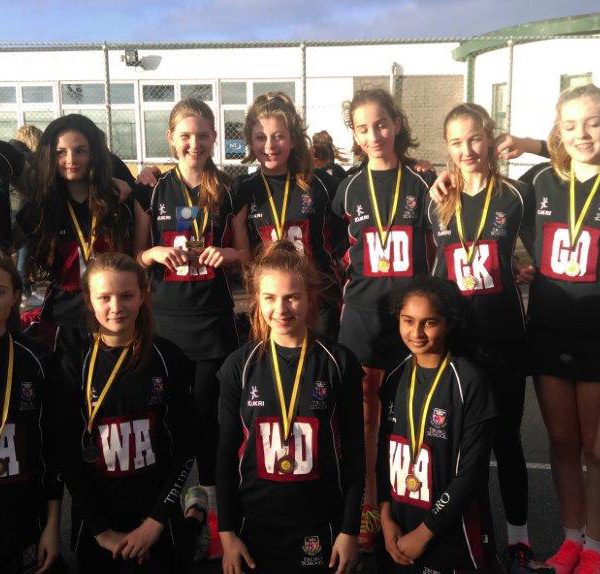 The U14 netball squad were crowned County Champions last Saturday, all 12 girls playing a significant part throughout the day. Truro School won their section quite comfortably, going onto play Mounts Bay in the quarter finals – resulting in a 16-1 win. In the semis they drew local rivals Truro High School and despite it being 5 all at half time, the girls played a superb second half and won 12-8. In the final we played Penair resulting in a 17-2 win and confirming their place at the Regional Finals in January.

Photo above: U14 County Champions

Truro started well but had difficulty coping with a tall shooter. It was a game where all players needed to defend the ball throughout the court to help the circle defence. Unfortunately we let Surbiton have too much unpressured movement on court and they were allowed to easily feed their circle. As the game progressed Truro did try and pressurise Surbiton’s passing. I’m sure from this game the girls will realise the need for intensity of defending and movement off the ball.

On Wednesday 16th November the U12 B team competed in a netball tournament at Redruth School. The newly formed team played and won all 7 matches, making them winners of the pool. The girls had convincing wins against Mullion and local rivals Truro High scoring an impressive 7 goals to nil. Unfortunately the torrential rain put a stop to play meaning that the semi-finals and final could not go ahead. The girls were pleased to leave with a medal and as joint winners of the tournament.

The girls played some of the best netball we have ever seen, working very hard throughout the match but this was not enough against a very strong Maynard squad. Elinor was voted Player’s Player and Rosie was Coaches Player. Captain Molly led by example in the shooting circle with a superb performance.

An extremely strong college team grabbed the game by the scruff of the neck in the early stages and, despite winning two quarters, School could not cope with the rapid play of the opposition. Particularly encouraging for us was the care taken when in possession of the ball. Some stand-out performances give the coaches plenty to think about before selection for the regional finals next term.

With only 7 girls committing to the fixture the girls had to play in positions they wouldn’t normally play in. The shooting circle and defending circle worked so hard throughout both games. In the two matches the teams were evenly matched. Both teams made mistakes and it was up to the other side to capitalise on it.

Penryn lead in the first quarter by 2 goals. Penryn had a tall GD and Truro didn’t know how to counteract this. A change of team in the second quarter change the feed and Truro got back the 2 goals only losing in the last seconds of the game.

Truro threw a lot of balls away by not driving onto the ball. Penryn chased every loose ball and this was the difference between the teams. With the light fading fast the eventual score was Truro 3 Penryn 5.

An excellent performance by the U14s against a strong opposition. Truro School dominated in a superb display of their mature netball. The whole squad rallied in very dark conditions! Excellent shooting from Rosie.

Penryn had a strong start in the first quarter but the girls fought back chasing every ball and feeding it into the two shooters resulting in a draw in the second quarter. Throughout the third and fourth quarter the girls continued to fight hard, the defence worked very hard to put the Penryn shooters under pressure and managed to get some great rebounds. This very close game ended in a 19-23 win for Penryn which was a great result considering that the girls were missing one of their shooters. Well done to Maddie who was nominated player of the match by the Penryn team.

The U16s had a great match against Penryn College. Fantastic defence from Sophie allowed the team to convert every interception into a goal. In the last quarter the team mixed up positions and Emily went to GA and scored an unexpected 6 goals!!

Truro High had a tall GA which was certainly the difference between both teams. Truro took a while to get into the game playing a game of chase rather than pressurising the passes and stopping the drive. This added pressure to the circle defence who worked really hard to try and stop the ball getting to their shooters. When Truro started to move the ball down the court, changing direction and driving onto the ball the dynamics of the game changed. As the game progressed so did Truro’s determination.

An excellent performance against local rivals; a far cry from last year’s loss at this stage. Truro played some very mature and controlled netball to dominate the game. A great team effort in cold and slippery conditions. Fantastic preparation for the Regionals in January.

A few experiments were trialled during this match with Zoe being moved to GS. It certainly paid off and was awarded coaches player of the match. The whole squad worked very well together displaying team work and unity. Jenna made some super interceptions and Lily had her best game of the season. Daisy was voted player of the match.

With being outside in the bitter cold, from the beginning we were tight on our players and pulled away from the High School with ease; With Alice and Ella shooting well and always getting the rebound even though the High School’s defence was very strong.