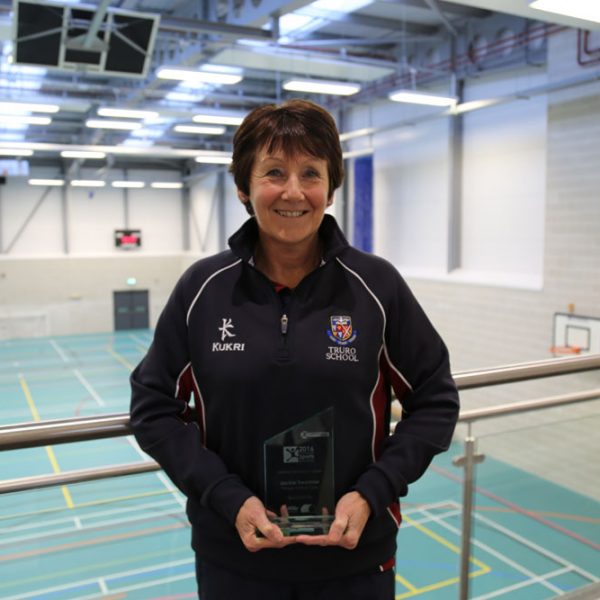 Our PE Office has been a buzz of excitement this week following the news that Netball Coach, Jackie Tresidder, won the Lifetime Services to Sports Award at the Cornwall Sports Awards on Friday night.

Jackie, who has worked at the school for 13 years, was nominated for her volunteer work at Penryn Netball Club. Jackie attended the awards ceremony held at the Headland Hotel, Newquay with her husband and two daughters, where she was announced winner and presented with her trophy.

Jackie says the nomination came as a complete surprise and that she has been overwhelmed with the positive comments she has received, she says:

“I have had such lovely comments from people saying it was well-deserved and that I’m an inspiration, I said to my daughter Claire, that I never thought I was an inspiration but it’s not until someone puts you forward for something like this that you realise how much you have done.”

Having volunteered at St Francis School and a few schools along the Roseland, as well as Penryn Netball Club and coaching here at Truro School, Jackie says it is her love for the game that has kept her going.

“I just love it and I hope that my love and enthusiasm for Netball is shown to all the girls that I coach.”

Following Jackie’s success at the awards, she has been put forward for a BBC Unsung Hero Award for her volunteer work in coaching, she says:

“I should hear if I’ve been shortlisted sometime in November, just to go and see all the Sports people there would be lovely, the fact I’ve gone through to that level is amazing, it’s very exciting.”