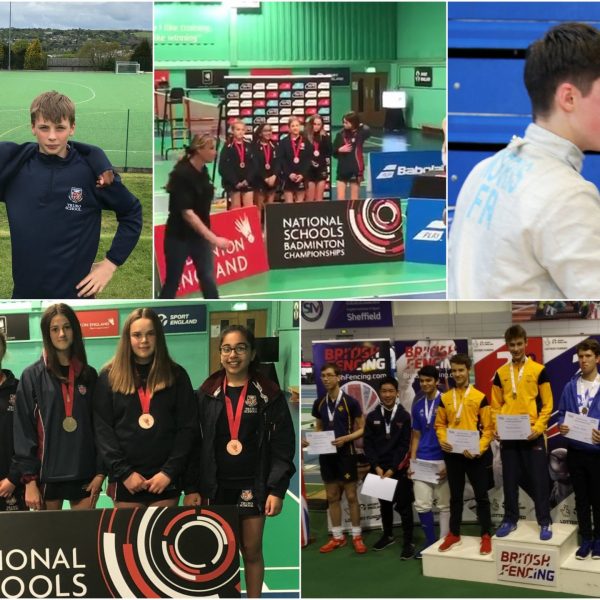 Over the bank holiday weekend our fencers travelled to Sheffield for the British Youth Championships. As the season begins to draw to a close we are now at the business end of affairs with our major championships at the front of our minds. We are delighted to announce Roman Norris’s national champion title in the Under 16 boys’ sabre.

Ranked 5th after the pools, Roman cruised through the draw to the final where he met a fellow club mate but made quick work of the fight winning 15-8. This is Roman’s first national championship title. Also at these championships Lexie Craze claimed bronze in the Under 14 girls’ sabre with Aimee Whitelegg in 13th and in the boys’ Under 14 sabre Amari Lawal finished 17th with Henry Martin, fresh off the back of an excellent set of championships in London and Barcelona, taking the silver.

Over the bank holiday weekend the KS3 girls’ badminton team travelled to the National Badminton Centre in Milton Keynes having qualified for the National Finals as one of the top 9 teams in the country from over 1500 teams that entered the competition. With the KS4 girls’ team having won bronze and silver finishes in the previous two years, hopes were high for this team of talented girls to replicate this success.

The girls were really psyched up for their first group game against Cramlington Learning Village. Joanna controlled the first game at no 1 with a convincing win. In the first doubles game of the day Isha and Marlee put in a confident performance with Marlee smashing well from the back of the court and Isha controlling the net to win 21-6. In the next singles, after a nervous start, Maya settled and found her range. She moved her opponent around to set up her smashes to win the match 21-7 and move the overall match score to 3-0. In the next doubles Cramlington got off to a good start but Joanna and Marlee were too strong for the opposition winning 21-7. In the last doubles Maya and Isha secured the 5-0 match victory winning 21-8.

The girls knew the second match against the seeded Iveshead School was going to be a much more difficult fixture as they had 2 very strong singles players at number 1 and 2. Joanna played really well in the first singles game where the standard of badminton was high but lost to a higher ranked player 12-21. Next up Isha and Marlee put in a strong performance to comfortably win the first doubles 21-11 to level the match score at 1-1. Maya had a tough game against the number 2 singles player but battled hard to lose 9-21. The winner of the overall match would go through to the medals play offs so everything rested on the final two doubles games. Joanna and Marlee showed great tactical awareness in a tight game. They moved the opposition pair around well to exploit the spaces and kept their composure to win the game 21-15 and level the match score at 2-2. In the nail biting deciding doubles match the score was tight throughout the game and yo-yoed. With the score tied at 15-15 you could feel the tension. Maya and Isha managed to isolate the weaker opposition player at key moments and hold their nerves to win the closest game of the day 21-18 to secure a place in the medal play offs.

The girls knew there would be no easy matches in the medal play offs as it was clear the two other teams were really strong. The first medal group match was against Sheffield High School for Girls. In the number 1 singles Joanna faced a tough opponent who placed the shuttle well in the corners of the court. Joanna played some excellent points but wasn’t given many opportunities to attack her opponent and lost 9-21. In the doubles Marlee and Isha played a really tight game. Having been edged by the other pair in the first half of the game the girls stepped up and became more aggressive in their play to push their opponents and take the lead. Unfortunately, Sheffield rallied and edged the game 18-21. Maya played some really positive badminton in the number 2 singles match generating good opportunities. She worked hard but her opponent was slightly more consistent and won the match 12-21. Joanna and Marlee got off to a flying start in the next doubles game before Sheffield played a series of strong points and edged in front. The highlight of the game was an outstanding rally where Joanna’s defence from the back of the court was phenomenal and enabled Truro to retake the lead. Sheffield fought hard to finally edge this close game 18-21. Isha and Maya replicated the same score of 18-21 in the final doubles game of the match so the overall match score was 0-5.

In the final match of the day the girls played King Edward VII High School for Girls. Joanna played another tough opponent and couldn’t out manoeuvre her consistently enough, so despite playing well lost 11-18. Marlee and Isha played some superb points exploiting the space on the court well, but their opponents gave them few opportunities and won the match 14-21. In a really tense high quality game, Maya played her best badminton of the day. She constructed some outstanding points but in the closest game of the day lost 20-21. In another thrilling encounter Joanna and Marlee got off to a slow start but showed great skill and grit to fight back, but couldn’t quite finish it off losing 17-21. The final game of the day was another high quality encounter, with Maya and Isha fighting hard throughout the match and with all of the players moving each other around the court well. The final score was 12-21.

After the highs of the initial group matches, the medal play offs were tough for the girls psychologically losing all the games, with several of them being very close. However, nobody can dispute all the girls gave their complete commitment until the last point of every match and the girls were absolutely thrilled to win a medal. We are incredibly proud of the girls and their fantastic team effort throughout the day. Winning a bronze medal at the National Championships is an outstanding achievement and every member of the squad played a crucial role. A special mention must also go to Mr Morcom who has coached the school team throughout the year and the parents who came all the way to Milton Keynes to support the team.

Benjamin W and Freddie I have been selected to represent the England ISFA (independent schools football association) Under 14 squad.

The boys will be training at the summer camp at Harrow. This is a tremendous achievement and we wish the boys all the best for their upcoming games.