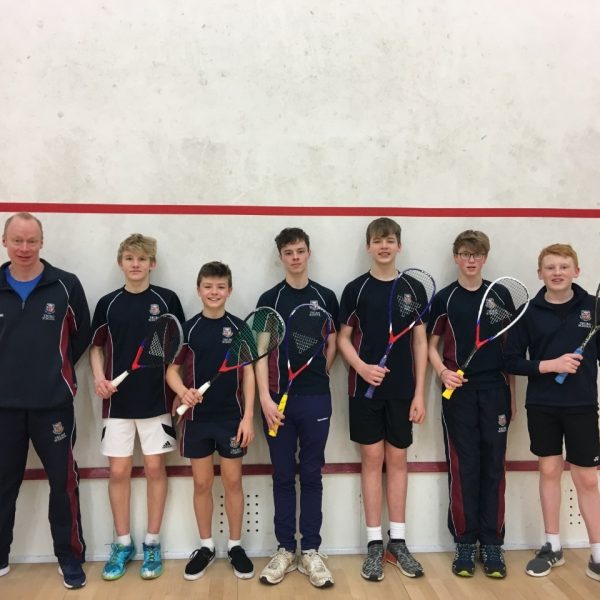 Part two of our personal “Mission Impossible” turned into the most dramatic Squash triumph for the School imaginable on a day of utter drama, excitement and sporting excellence in the KS 4 final qualification round for the National Schools Championships.

The squad consisted of Jack M, Louis M, Ben T, Joe T, Ollie B and Callum O. All our players were aged 13 or 14 for this match-up against the highly fancied Wilsons, the no2 Sports school in England, Whigift and a strong host team in Charterhouse; all of whom played boys 15 and 16 years of age against us!

On paper, Wilsons were incredibly strong in the opening match but we set about our task in gritty determined style with great wins for Callum and Joe, mixed with a tough loss for Ben. What unfolded next was sheer brilliance form Louis Murray beating the National U15 no10 in straight sets with near faultless squash and an awesome win for Jack M over the National U17 no13 (3years older) in an encounter when both had match balls and our Truro player clinched the win!

We then played Charterhouse who produced some fresh legs for the match and edged out Ollie, Ben and Joe with, to be fair, some very good squash. Jack and Louis secured strong victories but several points were dropped and the overall fixture was destined to do down to the wire!

In essence we needed to beat Whitgift substantially to win the group and our gifted players set about the task with absolutely everything they had left. Callum played a lad 4 years older and actually got a match ball before eventually going down by the tiniest of margins. Ben then settled the camp with an irresistible straight sets win for us and Joe went on, despite tiring legs, to grind out a formidable win as well. This left the stupendous talents of Jack and Louis to “bring it home” which they did in totally professional style, the latter without losing a single point at all!

The fixture referee then calculated the final points tally with ourselves, Wilsons and Charterhouse desperately close on the overall standings. After 5-10 mins which seemed like hours the final results were announced. Truro 33 pts  Wilsons 29 pts  Charterhouse 28pts and Whitgift 7pts.

National finals March 20/21st in Nottingham for both our teams… Now for the greatest prize of all….