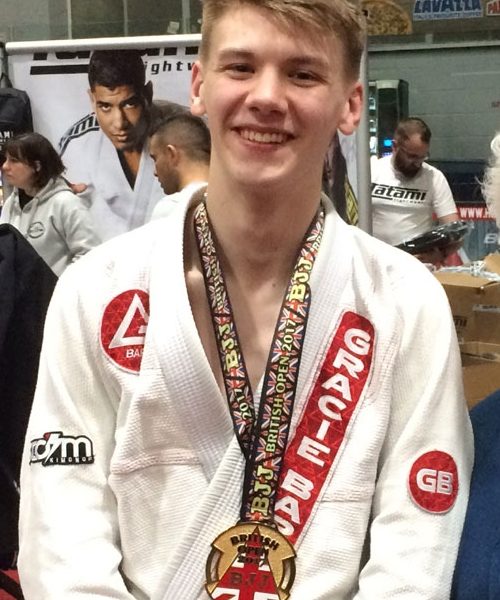 Congratulations to 5th Year student, Felix, who recently won the title for Juvenile Boys (aged 16 – 17) at the Brazilian Jiu-Jitsu British Open 2017, another accolade to add to his ‘blue’ belt.

Felix trains Brazilian Jiu-Jitsu  with the ‘Future Champions’ programme at the Gracie Barra Cornwall BJJ Academy based in Camborne under the guidance of multiple World, European and British title holder Raphael dos Santos and his coaching staff.

“All of us at Gracie Barra Cornwall are extremely proud of Felix,” comments Raphael, “not just for his achievements, but also for the commitment and attitude he has towards training and to representing both himself and Cornish BJJ as a young athlete.”

Brazilian Jui-Jitsi has long been the second sport of surfers, and a mainstay of most modern personal combat and self-defence systems, and is one of the fastest growing sports in the world. A grappling martial art that came to prominence due to its effectiveness in the Ultimate Fighting Championships and Mixed Martial Arts in general; it emphasises technique and leverage to overcome (submit) larger stronger opponents via chokes, strangles and joint locks.

“It is basically fighting,” jokes Felix. “But it’s so much more than that; Brazilian Jiu-Jitsu is a mental exercise as much as a physical challenge. It’s about the intelligent application of force and leverage, so there are endless variations and techniques and counter techniques. Principally though it’s a ‘lifestyle’ that promotes and encourages self-discipline; physical and emotional control, respect for yourself and others and a commitment to continuous improvement.”

“I want to thank all my instructors and training partners and also the school for their ongoing support with my Jiu-Jitsu.”

If you have any questions about Brazilian Jiu-Jitsu in Cornwall; how, where and if to train for sport or health, discipline, focus or self-defence, please do contact Felix through the school, he would be happy to chat or introduce you to the team at Gracie Barra Cornwall.”