Debate team fight with conviction at the National Finals 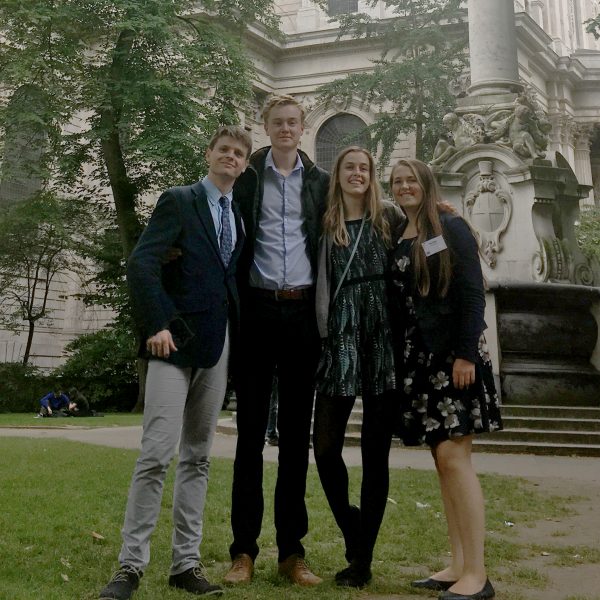 Last weekend, four members of our Debate team, Alex, Caitlin, Henry and Chloe, made their way up to London for the national finals of the Debating Matters competition. Head of the Debate team, Anna Selvey, tells us how they got on.

On Friday, we were treated to a drinks reception and Question Time event in the theatre of the Wellcome Trust – a panel of journalists, politicians and academics took some really challenging questions from the schools present and the timbre was set for the weekend: be bold and clear; question authority; don’t hide behind a stance of ‘taking offence’; respect your opponent and keep the debate going. We then had a speech-writing supper with Ollie Dobbs (older brother of Chloe, who reached the finals of the Cambridge Debating competition last year) before retiring to our UCL lodgings.

On Saturday, the debates got going. Alex and Chloe debated with humour and passion on the topic of removing monuments to controversial figures. They took challenging questions from the panel of judges and the floor and made their case with utter conviction. It was close, but the other side won this round – this was the side that went on to the Grand Final on Sunday.

Caitlin and Henry arrived on a plane at 10am, and were up debating by 12 noon – each on about 3 hours sleep after their leavers’ ball the night before! They argued against censorship of ‘fake news’ on social media, and , because they were arguing that social media was actually a source of truth, against a mainstream media that is the mouthpiece of the political elite, faced some really tough questions from a panel of judges which included two journalists! However, they kept their cool, took the points strongly back to their research and evidence, and finally won convincingly and stylishly. This, alongside revision for and sitting their A Levels!

With one win and one loss, we unfortunately weren’t through to the next day, but I was incredibly proud of them in all ways: of course, Chloe and Alex are Lower Sixth and will have another opportunity next year.

Caitlin and Alex then caught the train to Nottingham for the National Fencing competition! The rest of us attended the Gala dinner, sitting with Mark Adams OBE – parliamentary advisor to John Major and Tony Blair – and enjoying picking his brains for interesting anecdotes.

The finals were at the stunning Museum of London in Canary Wharf. Having prepared the motions for the final in case we got through – building on the green belt and no-platform policies stifling free speech – it was great to be invested as an audience, and able to contribute to the floor debate.

All in all, it was an absolute thrill to feel right at the geographical and intellectual centre of the most challenging issues of our very ‘interesting’ times. Our sixth formers were outstandingly impressive: flexible of wit, charmingly sociable and eager to draw as much inspiration and opportunity as possible from this rich and invigorating event. They will all be receiving debating colours on Thursday.