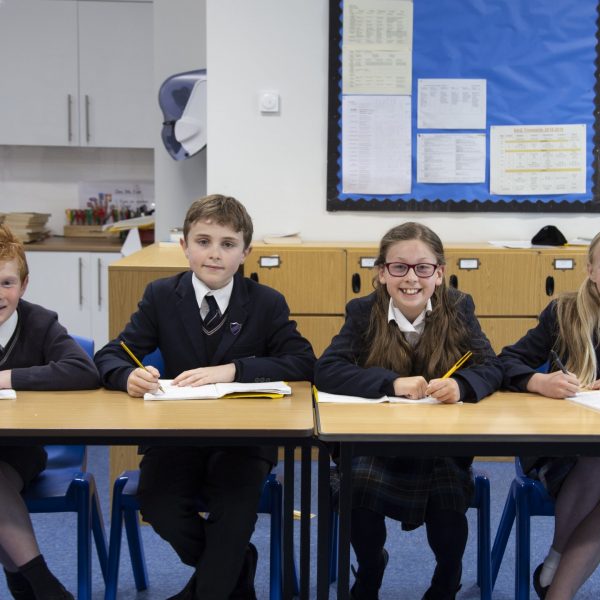 Four children from Truro School Prep have successfully written their way to the next round of the BBC 500 Words Story Competition.

Congratulations to Tilly-Rose and Benjamin from Year 5 and Samuel and Sophie from Year 6.

‘500 Words’ is the UK’s most successful short story-writing competition for children between the ages of 5 and 13. With an average of 140,000 entries the children have done exceptionally well to make it through to the last 5000, the top 3% of all entries.

Their stories will now enter the next stage with the chance of being judged in the finals by a range of expert judges, including Chris Evans, Her Royal Highness The Duchess of Cornwall, Malorie Blackman, Charlie Higson, Francesca Simon and Frank Cottrell-Boyce. We wish them all the best of luck. 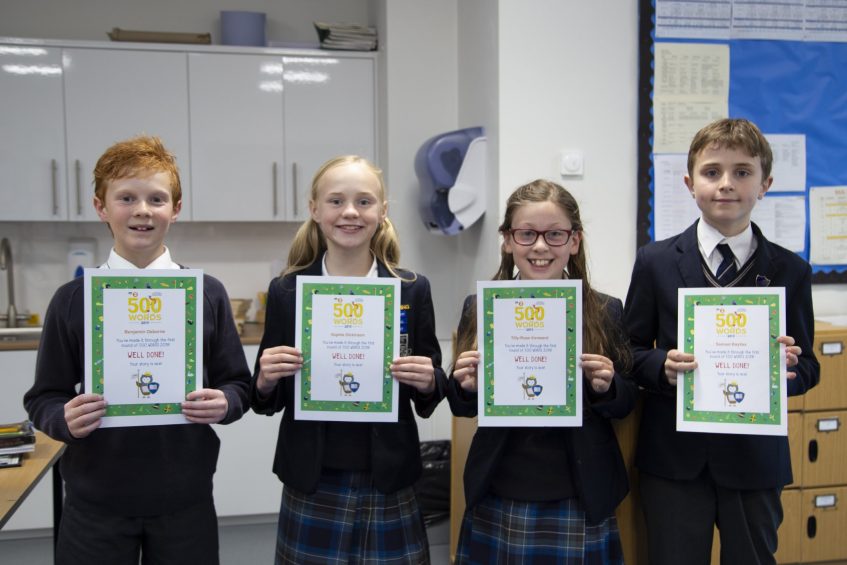 A Dog’s Reason for Living
By Tilly-Rose, Year 5

Suddenly I was there and then I realised I couldn`t see. Aaaaahhh, where was I? Oh, I knew I just needed to open my eyes! Ah there we were. I was a handsome golden retriever. Every day I played and had fun but I kept on coming back to the same question – what is a dog’s purpose? And when I really thought about it, it didn`t seem to add up to much. Maybe it was to have fun every day, but surely it wasn`t that.

And then suddenly it was all over, no more fun, I had been picked up by a human and had been put in a big red box on wheels, and I was being taken away somewhere. I heard them say, “I reckon we can sell this guy for a couple of bucks.”

Then they drove me away, and put me in a car with all the windows shut. I could feel the heat seeping through me, and I kept on wandering how do I get a drink of water? What was this feeling? I couldn`t resist it any more I shut my eyes, and went to sleep and before I knew it I could only see blackness.

Outside a boy was shouting. “Mum! There`s a dog in that car! And it`s going to die because all of the windows are shut!”
“Oh my word,” said the mother.
“We have to try and save him by opening the window or door!” said the boy.
“I can`t, it`s locked shut!” said the mother screaming.
“Ok I’m going to break the glass,” the mother said defiantly.

Then I heard a smash and then the glass shattered…

I woke up next morning exhausted. I saw right in front of me a friendly looking mother and child and the boy was shouting, “Mum can we keep him? Please?”

“Well you`ll have to ask your father about that,” said mum, so they went inside and asked dad if they could keep him, this was dad’s reply.

“WHAT? NO OF COURSE YOU CAN`T KEEP HIM! WHO`S GOING TO FEED HIM AND CLEAN UP AFTER HIM AND TAKE HIM ON WALKS?”

And from then on, I spent every day together with him, and after a while I learnt to very important words that my name was Bailey Baileeeyyy BAILEY BAAAAIIIILLLLEEEEYYYY and his name was Ethan.

From the moment I laid eyes on Ethan I had decided that I was definitely keeping this boy called Ethan.Many years went by and as they did our relationship grew stronger. And then suddenly a new idea came into my head of why there is a purpose to life it was because of love and friendship. And being with Ethan.

AND THAT`S A DOG’S REASON FOR LIVING

The White Serval
By Benjamin, Year 5

Finley was camping out in the middle of the African bush with his dad. They had been out in the bush for nearly a week and Finley was a bit bored of baboons, macaques, antelope, giraffes and elephants ECT. He wanted to see things like lions, leopards, cheetahs etc. One night, Finley was asleep when he heard a huge roar coming from outside the tent! Finley went to investigate the source of the defining noise he looked outside the tent but there was nothing out there just empty darkness all was quiet what could it have been he asked himself as he drifted off to sleep.

The next morning when Finley was having his breakfast his dad asked him, “What are you thinking about?”

Eighth day of searching Finley thought he saw a flash of white in the bushes to his left but then it had vanished “What was that?” Finnley said aloud.

“What did you say Finley?” his dad asked him.

“Nothing dad,” Finley replied not entirely truthful but hadn’t meant to say anything.

That night Finley was having a dream that he was in a science lesson with two lions and one of them was telling him that he was rubbish and that he had got his labelling the parts of a flower all wrong when the other one started roaring in his face Finley sat bolt upright in bed but the roaring noise wasn’t in his dream there was a roaring noise coming from outside the tent! Finley went to investigate but this time there was a white serval that was purring so loudly it sounded like a roar so that’s what was making the roaring sound Finley thought to himself and suddenly the serval darted forward and started curling its self around Finley’s legs and then it darted into the tent and curled up on Finley’s bed and fell instantly asleep completely bemused Finley followed it into the tent and flopped down on the bed and fell strait asleep not even bothering to pull the blanket over himself.

The next morning Finley showed the serval to his dad and his dad’s mouth dropped and he just stared at it for a l minute and then he said, “I should find it some breakfast.”

“You should,” Finley replied. Then from outside the tent there came a truly terrifying roar that the serval was not making, and a male lion leapt at them and with one reflects movement the serval killed the lion and was given his breakfast for being such a good serval.

The Lamentable Tragedy of Phil
By Sam, Year 6

Once upon a small bunker there was a scientist named Phil. Now Phil loved Shakespeare so much that he only spoke in Shakespearean style. He found the rest of the world’s lack of love for beautiful art insulting, and believed that everyone on the whole planet should love Shakespeare as much as him.

He had researched day and night, trying to find a way to make everyone Shakespeare crazy, and then he figured it out. He plugged his brain into a powerful machine, which would send his brainwaves into the ears of every person on the Earth straight towards the brain, giving other people his point of view. It would be a Shakespeare paradise! Without hesitation, he put his head in the machine, and turned it on. His brain felt like it was going to explode, but as Shakespeare said, “Whether ’tis nobler in the mind to suffer…” It worked – the minds of the world were now Shakespeare obsessed!

Phil went into the city to observe and discuss Shakespeare with other people. He saw a woman with a friend walking a dog. She said, while looking at the dog, “Jack’s but a walking dog, a poor fetcher.”

The friend replied, “Don’t be sad Olivia, all dogs at some time are masters of their fate”

“What?” thought Phil, and he rushed back to his lab.

“I just don’t get it,” muttered Phil, fumbling around with his computer. “They’re saying Shakespeare quotes but differently to be relevant to the conversation?”
After lots of research, Phil finally found out. The machine did make them Shakespeare obsessed, but they still spoke about their own things.

Meanwhile in the Amazon a jaguar was chasing a small mouse through the leaves. “Mice die many times before their deaths; the jaguar never taste of death but once,” commented the jaguar. The animals of the world also absorbed the brain waves and now speak Shakespeare!

Wow, Phil really has put us in a pickle hasn’t he?

Luckily, Phil saw this after hacking into satellite cameras. “Oh no, I’ve messed up everything,” said Phil, nibbling his fingernails. “The whole world is out of order, wait, why isn’t my parrot Corky speaking Shakepearean?” He looked at Corky sitting there gobbling down a stolen sandwich.

Phil turned to his computer. After about two days of studying, he figured out the problem. Since Corky was so close to the machine, it did not affect him. Phil gasped; he knew how to fix the mess.

“Corky,” Phil sternly said. “You’re the only one in the world who isn’t Shakespeare obsessed, I’m going to have to put you in the machine, and send your brain waves into everybody.

After the whole process, it was done. Phil checked the cameras to see if it had worked.

Her Future Self
By Sophie, Year 6

She screamed. She knew it. She knew who it was. The same every year, every year on the same day.

Her heart was pounding in her chest, the slightly creepy sensation of someone watching you falling over her. She looked around the dark, moonlit alleyway, and she felt something tug at her shoulder, the cold touch of a finger on the bare patch of her shoulder, it was heart-stopping. For most people.

It was happening again. The hooded creature was here. A single tear rolled down her cheek, and was soaked up by the jumper she was wearing. She felt it again, the cold tension of her muscles confused as to what to do.

Immediately she wished that she was back at her house, snuggled up underneath her duvet, softly sound asleep, but of course not. She was out in the dead of night, shivering in the freezing night air, with this thing. It turned around, forcing her to look at it. She clutched her eyes closed and heard the voice of the creature. She screamed again, blocking out the noise of this thing in front of her.

It had gotten worse every year, and now Zoë Kanklenda was 12. Zoë shut her eyes at the thought of seeing it. The creature was entering her mind now, picking out memories from her brain.

It seemed like a year, maybe two, before her brain resisted the urge to stop fighting. It had only been a couple of minutes unconscious, without breathing. Her brain thought the mush and bones around it could withstand the horrible outcome. There was no blood with any oxygen to help it, so Zoë’s body would soon completely fail her.

She knew how. She had been trained to do this. Zoë had learnt to overcome the body’s accusations.

She gasped. Flashing lights fluttered above her head, and when she saw a black hooded figure come into view, she turned over, cutting herself on a piece of glass as she did. Blood seeped out of her wound. She wished someone could help her, but no, she had to run. She stood up, her legs barely taking the strain, and ran for her life. She got about 10 metres before the hooded creature grabbed her shoulder and forced Zoë to open her eyes.

The future flooded in. In front of her was Zoë Kanklenda. The hooded creature was her future self.