Anonymous Art Auction raises over £4,000 for The Wave Project 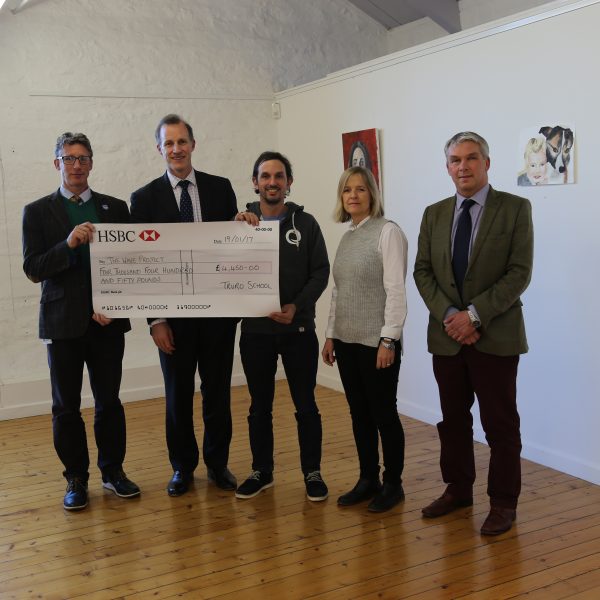 Joe Taylor, founder and CEO of the charity, visited Truro School to receive the cheque following the success of an Anonymous Art Auction that was held towards the end of last year.

With over 80 canvasses to auction on the night, from Truro School students, staff, parents and even a few famous local artists, including Louise McClary, Robert Jones and Paul Wadsworth, and the help of professional auctioneer Andrew Body from Lodge and Thomas, some of the paintings reached bids of up to £250.

The Wave Project runs an award winning surf programme, transforming the lives of young people suffering from anxiety. The money raised from the auction will go towards the Surf Club, which is an unfunded part of the charity for children who have already completed a Surf Therapy course and wish to continue with ongoing weekly intervention.

The cost of these weekly sessions are subsidised solely by fundraisers and supporters, so as Joe Taylor explains, events such as Truro School’s Anonymous Art Auction are vital for the charity:

“Because the club doesn’t have any direct funding, it is fundraising events like this one that keep the club going and help us provide the ongoing intervention for the children all year round.”

The auction was organised by the former Chair of the Friends of Truro School Committee, and Truro School parent, Jo Craze, who chose the charity in the hope that it would inspire a number of people within the Cornish community to get involved and either donate a canvas to the auction, or come and bid on the evening.

While the amount raised will be of huge benefit to The Wave Project, Joe Taylor says that’s not the only thing that they will have taken away from the event.

“A really important part of our fundraising strategy is community based fundraising, to bring people together and raise awareness. The auction was a really innovative way to raise money and was also great for us to be able to tell the parents who came and supported it a bit more about what the Wave Project does, which is key to what we need to do to survive as a charity,” says Joe.