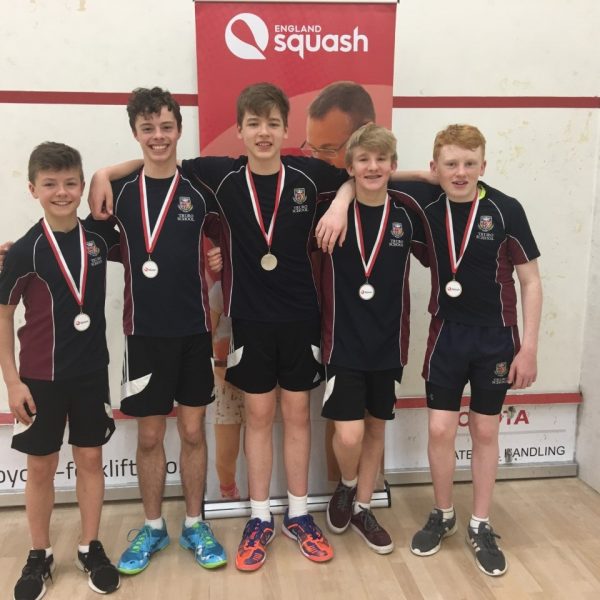 In order to set the context for this report I have to emphasise that after 3 matches on the Wednesday, most of our team was weary, battle scarred and facing opponents 2-3 years older and a foot taller on the KS4 Thursday. Only Ben Thorpe could enjoy the comfort of having fresh legs as he came in at no 3 string with Joe and Ollie playing at no 4 and no 5 and Callum now first reserve.

Louis was literally held together by Roc tape and Jack was mentally shaky overnight after the events of KS3. What followed was simply sensational and I deeply thank the expert medical, dietary and vocal skills of the parents attending who played a vital role as the day wore on. Plus my co-coach and ever so solid Rory.

After an hour plus delay the team managed to dust themselves down and start much better than the day before. Everyone played really well and came through their matches having perhaps got used to the early nerves, or in Ben’s case dealt with them nicely. Ollie, Joe and Ben all won 2/1 while Louis and Jack again looked extremely composed in their games, clearly overcoming their personal physical and mental tests. Truro won 5/0 and that magic word, belief, was growing again.

This was now our 5th match in 24 hours and required an effort of gigantic proportions to compete for a place in the final. But, cometh the hour, cometh team Truro….

Ollie played first, went 1 nil down and then turned the whole match around with controlled, aggressive, attacking and quick play to give us a win at no 5.

Joe then played hard and fast, probably hitting the ball as well as Ive ever seen and lunging so much better to the front. He was unlucky not to get a win, but again his opponent had to play very well to edge him out.

On the other court Ben had a huge match against yet another highly accomplished player. The match was very very tight, but the Lincoln boy just seemed to have the final answer on a couple of key points at the end of each game and got the match result.

We were 2/1 down with captain and vice captain “marvels” Jack and Louis to play. The outcome was assured with 2 awesome victories which seemed little more than routine wins for the boys. Professional, calculated, polished and played in wonderful spirit too, Truro had somehow made the final again in K S 4 with a 3/2 victory. AMAZING.

This was always a ridiculously big ask as most of the Wycliffe team are Nationally very highly ranked, extremely experienced and simply much physically bigger than our boys.

Ollie played first and somehow repeated his heroics of the previous round with another gritty, gutsy and inspired performance. It was superb and gave us a glimmer of hope. Joe and then Ben showed equal qualities in their match-ups, but the quality of their rivals was very impressive and at this stage in their development they were simply beaten by stronger opponents, despite giving everything they could. Jack and Louis then fought against much older boys right to the end of their clashes and were not far away, but unfortunately for team Truro, their rivals just had too much strength and reeled them in. The final result was Wycliffe 4 Truro 1, but the real result was a mammoth achievement for Truro who exceeded all expectations by making the very final itself and pushing Wycliffe hard. Although initially slightly disappointed, the boys soon realised that making two National finals in 24 hours was IMMENSE and the atmosphere quite rightly picked up very quickly when they received their silver medals. This KS 4 team can win it outright next year.

Denied a National title by the smallest of margins perhaps, but full of optimism and desire going forward, the boys will now play and train with a deeper belief than ever before that they can go all the way soon.

We are officially the no. 2 ranked team in England. We know what that means for our target in 2020 : the no. 1 spot in England and revenge over a very strong but very aware Wyclffe. Congratulations again to Team Truro!