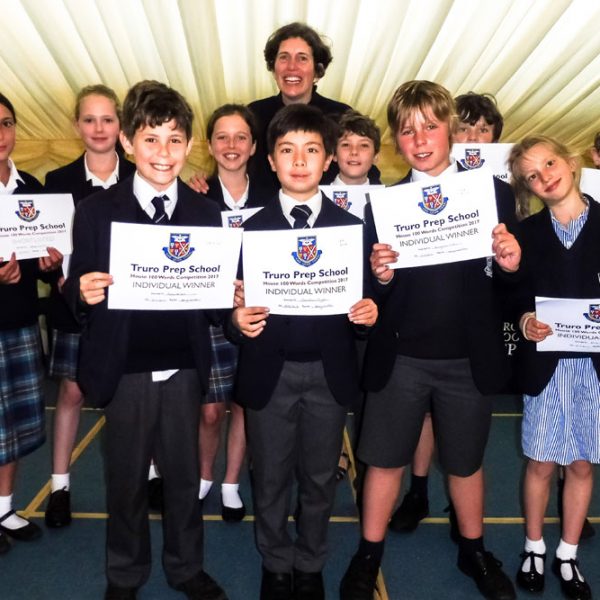 The children were set the challenge of writing 100 words or fewer. Even better, they could write about absolutely anything they liked.

We were looking for talented writers – children who could make their story stand out by turning a good idea into something extraordinary. The children rose to the challenge – after all, writing a 100 word story is no mean feat – and gave us some brilliant stories.

After careful consideration, the judges (English Department at Truro Prep) whittled the entries down to just 12 shortlisted stories – 3 from each house:

When we initially discussed ideas for the format of the 100 words final 2017, it would be fair to say that I wanted a rock band between each shortlisted story. Sometimes, grand ideas aren’t realistic – but I’d heard the Radio 2 500 words final live – so I was thinking big. Watch this space. It could happen in 2018.

Luckily, Mr Tolkien had another one of his clever ideas. He said that the competition final would provide an unmissable opportunity to introduce the children to published fiction.

The idea was simple: to show the children how award-winning authors engage their readers by selecting 12 opening pages from a selection of award-winning fiction.

Have we inspired them to get writing? Judge for yourself…

‘I enjoyed Sam’s story about a walk. It was well written and had a nice ring to it. The competition exceeded my expectations; the standard of writing was really good.’ Wilf G (Year 5)

‘I really liked Jonathan’s story about the gumball vampire. It was very funny when he crashed into the vending machine.’ Oliver S (Year 6)

‘I think that the published stories were a great idea. I can’t wait to read Cosmic by Frank Cottrell Boyce.’ Eva (Year 5)

Why not read the top three stories and see what you think?

‘The gumball vampire’ by Jonathan (Year 5)

What happens in this story? Clue’s in the name. Yes, Count Victor-Dross-Michelin-Charles-Dracula can only eat gumballs. He hated blood. He never ate anything. Until one fateful day, he tried turning into a bat. Against the odds, he was good. Great, in fact! He bobbed, weaved, twisted, turned, flipped, dived and rolled. He did the last one badly. Very badly. He crashed through a vending machine. He turned back, and a pack of Raspberry flavour Bubble Kings fell into his mouth and he got gumball superpowers. He started being a superhero! What happened next? He came to a sticky end.

Two men spoke in the dark as George walked by. They were wearing long black cloaks, like those in spy films. He needed to get home quickly, as he sensed danger. Suddenly, there was a bright flash, a bang! George felt a jolt. He opened his eyes. He was standing in a dark, damp forest in front of a blue door with scratches on it.

Through the door he went, down a long, grey, slimy, dank, stone corridor. He stopped, drawn by the flickering light. He thought he heard something – a gust, a howl? Daydream over. It was Mum!

Bruce was the strongest man in the world. One day, he got a very exciting challenge – he was going to the moon. He may have been strong but he wasn’t very smart. He thought the moon was made out of cheese. He loved cheese! The next day, he set off and when he got there, he placed a flag on the moon. He was so excited he started eating and took a bite. Then, one by one, his teeth fell out! So, when he got back he was not only not very clever but he had not teeth!

‘Spikes and potions’ by Raphi (Year 5)

Bob was a hedgehog, not just any hedgehog – a prickly hedgehog. When he visited other animals they were scared of his spikes. So, the next day, he went to Jeffrey the Wizardhog. ‘Do you have a potion, so my friends won’t be scared?’

‘I’ve got just the right thing,’ he said mischievously, and he handed him a bottle; he drunk it in one.

‘Where are your spikes?’ his friends now remarked; he realised he had none. He raced all the way back to Jeffrey and demanded his spikes back. His friends all said, ‘We like you the way you are.’