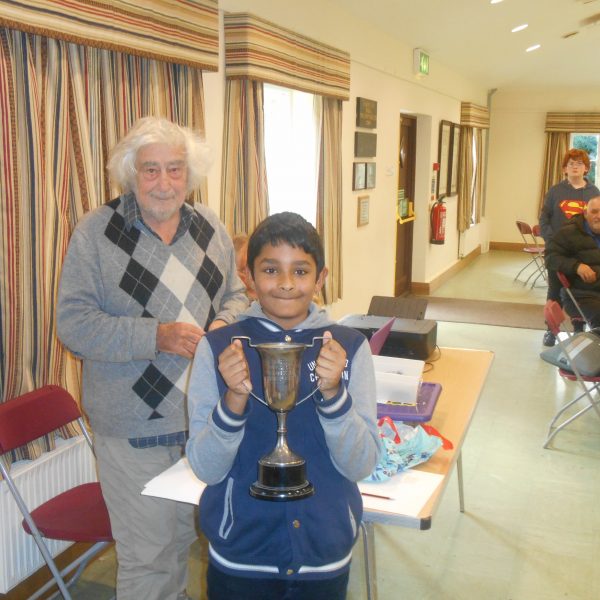 Adam presented with the Cornwall Under 14 title by Professor David Jenkins, former Captain of the County Senior Chess team.

It’s been an incredible year for Year 6 pupil, Adam, who has been crowned Cornwall Under 14 Chess Champion and Under 12 British Rapidplay Champion, at the age of just 10 years old.

Having won his first two County games earlier this year, and finishing 5th in the British Under 10 Championships, Adam continued his streak of success by claiming victory at the Cornwall Under 14 Championships, which was held in Lerryn on Saturday 22nd October.

Adam, who usually practices Chess for two hours a day, said it was great to receive the trophy for playing in the County tournament and that he was proud to be able to win it for the school.

Following this, Adam attended the British Rapidplay Championships in Leeds on Saturday 12 and Sunday 13 November, where he played in the most competitive age group of the competition. He found himself, not only being crowned Under 12 Rapidplay Champion on the Sunday, but also qualifying for the final England Under 11 Trial in April.

When asked what he loves the most about the game, Adam says:

“It challenges your brain and gives ideas on how to work something out, I like attacking a problem!”

Although he has had a very successful year so far, Adam says it is important to learn from defeats in the game. He says he picked up Chess after being taught by his Dad, and went on to join the Truro Prep School Chess Club when he was in Year 3, where he was able to learn and test his skills against the older pupils.

The Chess Club is run by Mr Menadue, who says he is confident Adam will make it through to the England Under 11 team at the trials in April: “It certainly won’t be for want of trying, I’m confident that Adam can get through,” says Mr Menadue.

Adam has no plans to slow down his Chess competing in the future, with ambitions of not only making it into the England team, but striving to get International ‘Elo Rating’ in the future.

We wish Adam the best of luck for his future Chess playing.