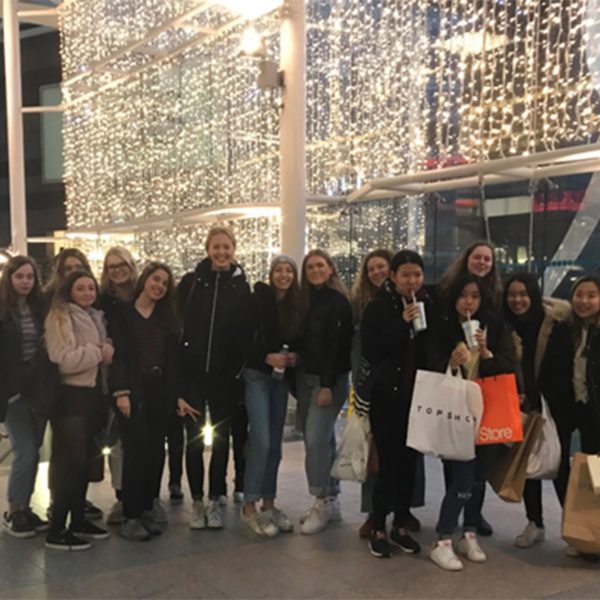 Welcome to the penultimate weekend blog of the Autumn Term 2018!

Wow, I cannot believe it; it is December and there are only two more weeks until we break for Christmas.

This week has been a busy one with two main activities occupying the girls’ time. The 5th Years, whose mock examinations commence next week have been particularly studious and for those not immediately involved in exams, time has been spent preparing Christmassy items to decorate the house with over the weekend.

Good news has been rolling in too: Jemma has now received offers for four of her chosen universities and Charlotte has been called for interview at Oxford….next week! Sophie P also passed her driving theory test on Wednesday so it is celebrations all round for the Upper Sixth and even more reasons for the staff and I to be proud.

The whole school charity challenge, to collectively cover the 1277km from here to Indonessia, where the devastating earthquake hit, has also been strongly supported in house. The girls have been doing their bit in the gym and pool and so far we have 267km to add to the school pot.

Wednesday evening saw some of the girls opt to do early prep and then pop into town for the Christmas lights switch on, reindeer parade and first night of late night shopping. Having completed early prep the girls spent an hour perusing the shops, purchasing their Secret  Santa gifts and generally enjoying the Christmassy atmosphere.

It seems the meeting was a success and we are looking forward to Codi feeding back the outcomes later tonight at the full house meeting.

Thursday evening saw Megan go back to her old school for an awards ceremony whilst Leanne set of for another fencing competition…this time in Germany!

The girls returned from school on Friday happy that it was the weekend and ready to enjoy some down time and the opportunity to gather their thoughts; they certainly seemed a little wearier than usual. It didn’t take long for this tiredness to be sidelined however; the excitement that came with the advent calendar giving out at 6.30pm roll call was quite something; my challenge for them not to eat the chocolates all in one go and to just open the one door each day remains to be met however!

Whilst the girls got on with their usual hour of prep I rooted around to find the Malvern Christmas decorations. The girls didn’t need much encouraging, especially with the inter boarding house competition looming, and soon appeared having made some pretty impressive hanging snowflakes…well done to Jemma, Sophie and Hannah, I didn’t know such paper work was possible!

Lie ins were welcomed on Saturday morning and the girls had a leisurely start to the day. The gym and swimming pool were enjoyed by some after brunch and  further glittery activities filled the time between brunch and the 1.30pm roll call.

Later, on Saturday, Miss Naylor encouraged the girls to have a break from work and mock revision and bought as many Christmassy type treats as she could find. The girls congregated in the common room and set about the decorating task whilst also doing some baking…

It was lovely to walk into the Malvern House Common Room, following Miss Naylor’s day in charge, on Sunday morning to find that the festive elves had been out in full force decorating and Christmas-afying the house. I am sure you will agree, from the photos below, that the girls did a great job! I particularly love Anna’s idea of drawing/painting a wintry scene to replace the pictures in the house frames.

On Sunday, the house was very quiet as the girls made the most of a second lie in before brunch. We then joined the boarders from Pentreve and set of for a day of Christmas shopping in Plymouth. Driving in convoy, Mr Hatfeild and I were both subjected to (well I don’t generally need to be asked twice to get into the Christmas spirit) Christmas tune after Christmas tune on the journey up and out of Cornwall. It was great to hear the girls laughing, joking and singing their hearts out. Three hours of shopping then ensued and the girls were slightly quieter on the way home….shopping clearly takes it out of you.

This evening, after a hearty roast dinner with all the trimmings, the girls are completing prep and readying themselves for the morning.

The week ahead is set to be another busy one. The 5th years sit their GCSE mock examinations and although nervous they are in good spirits; they have worked hard and can walk into the exam hall safe in the knowledge that they could not have done anymore. Regardless of the results, Miss Naylor and I are very proud of the mature manner in which they have approached these exams and we will be with them in spirit all week. There is an art trip tomorrow for Anna, Sophie and Meg and then there will be the option for further late night shopping on Wednesday.

Next weekend, the final weekend of term, we have ice skating at the Eden project and the Boarders’ Christmas Service, meal and party to look forward too..the girls will exchange Secret Santa gifts and I am looking forward to seeing them all dressed up, dancing and having fun.

Make sure you read next week’s blog to see all the pictures!