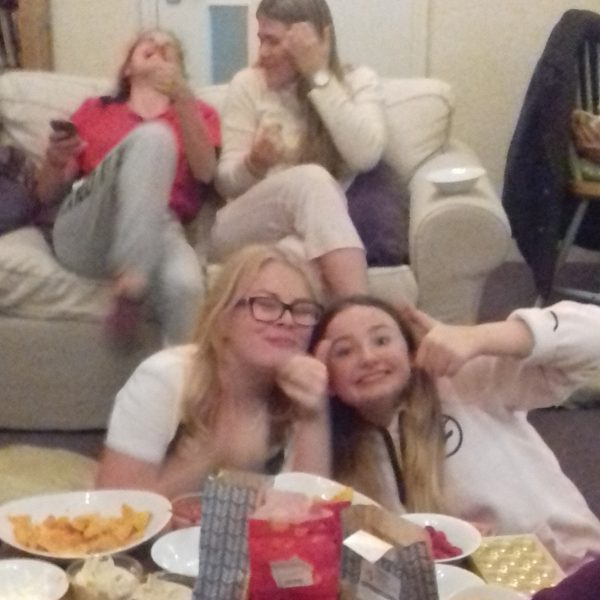 Welcome to the first blog of the second half of the winter term in Malvern!

It was lovely to see the girls as they returned from their 2 week half term break, and hear about what they had been getting up to. It was also lovely to welcome Lowenna to the Malvern House as a new weekly boarder. We hope you are enjoying Malvern as much as we are enjoying having you, Lowenna!

During the Half Term Amy went to Nice on the Modern Foreign Languages trip, while Helena and Lowenna had spent a weekend with the choristers performing in London and Cambridge. Their performances included Evensongs at St. Paul’s Cathedral, Pembroke College and Jesus College, Cambridge and Eucharist at Ely Cathedral.

Emma’s half term saw her cross threshold into adult hood, turning 18 shortly before we returned back to school. However, not ones to miss out on a celebrations and cake, the girls celebrated on Monday after they were all back together. Happy Birthday Emma!

The first week back was just as busy as the last half of term proved, with the girls getting up to all their usual activities and more. The Upper Sixth especially have hit the ground running with Sophie and Charlotte both submitting their essays/UCAS applications for university this week. Fingers crossed for you both!

We are especially proud to report that Helena also won the School’s House Music Competition where students competed to gain points for their houses and played pieces of their own choice, both in ensembles and as solo performances.

160 students took part in the first round with 52 reaching the semi-final and Helena winning the overall prize for the Senior Category. This is especially exciting as the final was judged by guest adjudicator Timothy Dean, former Head of Opera at Royal Conservatoire of Scotland. Very well done Helena!

At the end of the week, the whole house partook in the Schools’ Remembrance service in the Old Sports Hall. This was a very moving and poignant service, with the sixth form commemorating all the ex Truro School pupils who had lost their lives in service by placing a symbolic cross on a board during the reading of the Truro School roll of honour. The headmaster mentioned the humbling fact that by the end of the war in 1918 over 400 of our former pupils had served in the armed forces, 166 as commissioned officers and 55 as non-commissioned officers. During the war, reports came back to the school of various acts of bravery and gallantry, including over 500 letters to the then Headmaster from former pupils about their experiences of the war.

As the weekend approached, the weather began to turn and many of the girls chose to spend Friday and Saturday evening in the house sheltering from the inclement wind and rain! However, clearly the change in the temperature also had some of the girls feeling festive as Kristina and Amy spent Saturday crafting fake snow (I have heard rumours that this may or may not have been subsequently spilt reminiscent of the 1/2kg of glitter that was discovered on the common room floor…However, I have seen no evidence yet so at least the girls are getting better at covering their tracks!), and Lisha, Winkie, Tulip, Cherry, Tung and Stephanie went to see the new Christmas Film, Mr Grinch for their weekend activity. On a less festive but hopefully equally enjoyable note, Codi, Kristina and Amy chose to see Bohemian Rhapsody whilst the rest of the girls warmed up in Thorntons café with cakes and hot chocolate.

On Remembrance Sunday the girls all attended the service in the Cathedral, commemorating the Hundredth Anniversary of the end of the First World War. This was a very moving service to be a part of, and the girls all behaved excellently and enjoyed the service. After the 2 minute silence at 11am, 10,000 paper poppies were dropped from the tower of the Cathedral representing people from Cornwall who died in World War One. They were made by children in the county, creating an incredibly poignant display. The poppies were created by local school pupils (including some from the Truro pupils) and were of all different colours to also remember those who in all consciousness could not fight ion the war but serves, and died, in other capacities; service personnel from overseas; and animal causalities of the War. They floated to the cathedral floor from the central tower balcony.

Sunday also saw Anna B turn sweet 16, so the girls bravely saw off yet more cake as we celebrated, with the house dressed up for another Birthday with banners and balloons. Happy Birthday, Anna! We hope you had a lovely day.

Hannah and Leanne were unfortunately absent for the busy weekend, as they were away at fencing competitions. Hannah travelled to London to take part in the Leon Paul Open and finished a very impressive 3rd place, while Leanne travelled all the way to Kansas City on Thursday evening for the North American Cup. They were missed during the weekend, but we are very proud of how committed and successful the girls are in their fencing pursuits!

The week approaching promises to be as busy as ever, with a Pizza night and an Art Trip on the cards for some of the girls, as well as welcoming Leanne back on Tuesday!