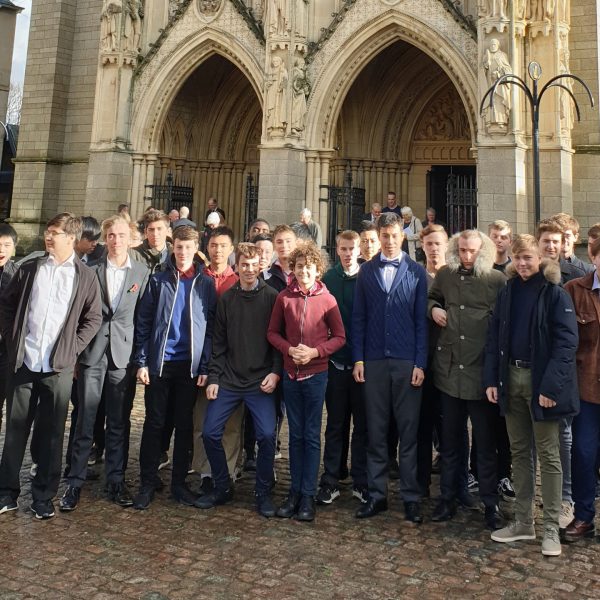 The Trennick boys have enjoyed another busy weekend.

The Trennick boys have enjoyed another busy weekend. Ollie, Callum, Alfie and Justas all made the journey to Exeter School to play rugby for the 1st XV. Unfortunately, despite their best efforts, they lost narrowly to the hosts 14- 7. Simon continues his fine form for Truro Hockey Club, scoring a goal in their 6-2 victory.

There was an Upper Sixth parents meeting on Thursday evening  – Max, Laurenz and Obum kindly helped host the event. They were involved in meeting and greeting some parents and then helping some parents locate the right teachers! Mrs. Elliison was very impressed with the natural charm of the three Trennick helpers.

It was great to see Obum and Finley involved with the initial ACHE counsellor training. The ACHE program aims to help Sixth Form volunteers gain experience and training in helping younger teenagers with the challenges of growing up.

Special mention must go to Chris, Mars, Sammy and Callum who have been awarded Star Independent Learner status. These boys have been working hard enough to gain the trust of staff to manage their own studies and complete their homework in a time that they choose. This will also help prepare these boys for studying at University where they won’t have a Housemaster nagging them to do some work in the evening! They must maintain their efforts to keep this privilege and it is hoped that more boys will work hard to achieve this.

Sunday saw the 100th anniversary of the end of the 1st world war, the boys took the opportunity to visit Truro Cathedral for a memorial service, their behaviour and respectfulness was a real credit. The service itself saw some amazing singing by the choristers who are based at the school and a highlight was an incredible poppy drop, with thousands of paper poppies falling from the top of the middle tower. It was a very poignant moment and I am sure it will stay with the boys for some time.

After the service several of the boys took the opportunity to get a coffee and some food, with the rest of the boys choosing to watch a film at Truro cinema. The weekend finished with the normal preparations for the week ahead.