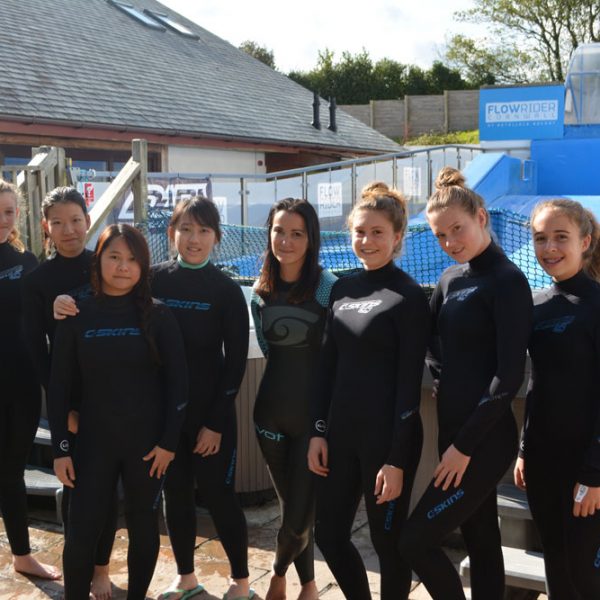 This week has been a busy one for a number of reasons: Fiddler on the Roof rehearsals continue for Lucy, Amy and Anson; Anne attended the Monday after school netball practice and Tung and Anson continue to make the most of their badminton talents, regularly practising in the SBASC. We welcomed Lucy and Sophie to the house mid week and the eagerly and hotly contested bake off kept our minds occupied for the best part of the week.

On Thursday the Mulready kitchen was taken over and turned into a ‘baking hub’ where the Pentreve entries for the first ever ‘Great Boarding Bake-Off’ competition were masterminded. The three teams had, earlier in the week and after much deliberation and careful selection, choosen their ‘bake’ of choice and much research into the best receipe was carried out. Mr Mulready dutifully went to Tesco to purchase the ingredients and the girls worked together to mix, measure, grate, whisk, melt and fold their ingredients. I found it almost impossible to keep a track of who was where in terms of the recipes, that were helpfully written in Spanish, Chinese and German, and so I took up my roll as chief photographer for the event instead. 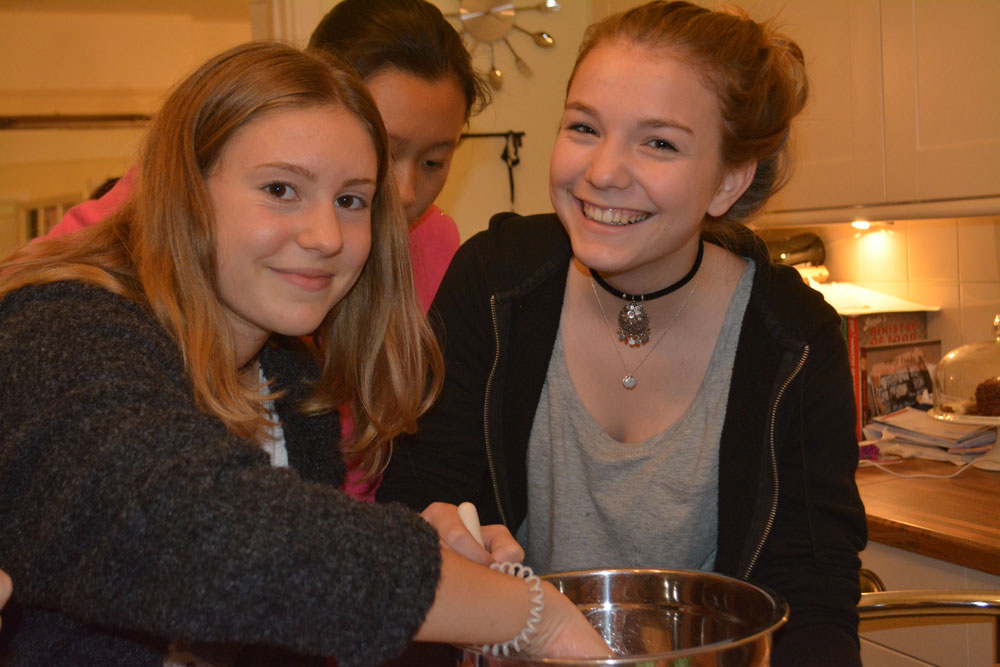 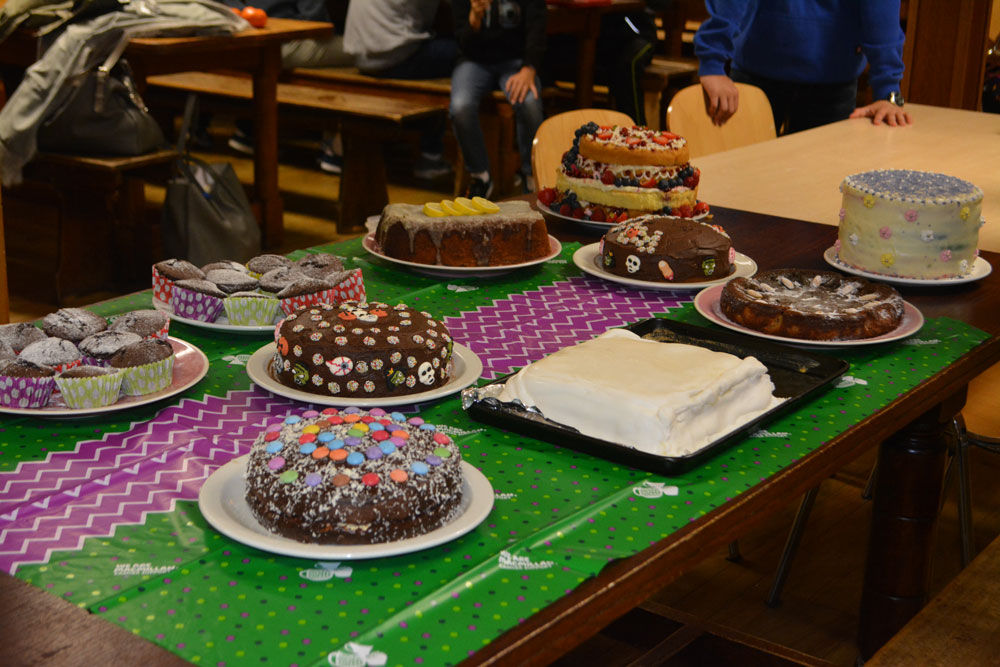 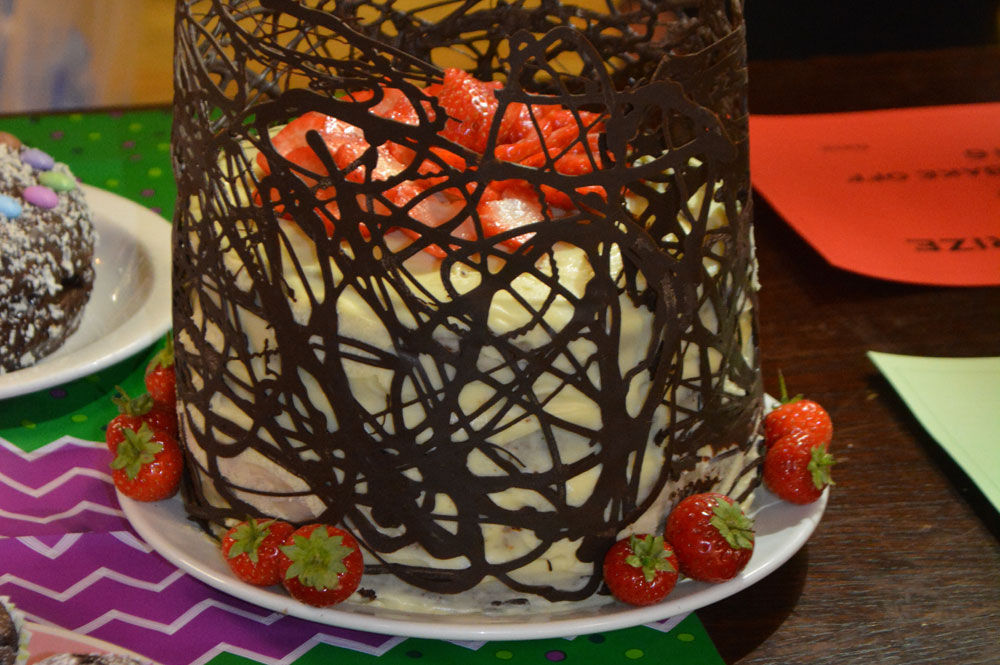 Caroline, Lena, Amy and Helena whose team choice was a lemon drizzle cake got off to a quick start and were the first team to have a cake in the oven. Having selected a very deep dish the cake took for ever to bake through but the end result, although a little bit burnt on the outside, tasty lovely and was oozing with lemon and sugar syrup by the time Caroline had finished decorating it.

For Cherry, Tung, Anson and Lucy the lemon, honey, almond and polenta cake took a lot longer to put together but the smells whilst cooking were divine. The simple almond, lemon and icing sugar decoration lead to a modest yet, again, very tasty entry.

And the third bake, Anne, Victoria and Stephanie’s Oreo Cheese Cake…well, what can I say? The first effort ended up all over my kitchen floor and the second stood, unset and still in a very liquid form in my fridge on Friday moring…we are blaming the translation and feel that a vital setting ingredient may have been missed out. Nevertheless, at 5am on Friday morning, and upon the discovery of said liquid cheese cake, I quickly rustled up some chocolate cupcakes so that there was still plenty to be sold in the break time Boarders’ Cake Sale.

At 8 o clock on Friday morning the girls proudly carried their cakes to the dinning hall and all was looking hopeful until the senior girls from  Malvern House arrived with their ‘showstopping’ entries. Layered cakes with intricate piping and amazing chocolate work put all the other enties to shame and certainly set the standard for next years competition…I for one will be watching all the past episode’s of ‘Great British Bake Off’ between now and then…competitive? Me? No!

At breaktime and with the judging out of the way (we did not place in the top three…this time) the cakes were sliced and sold for donations to the rest of the school. The cake stand was mobbed by students and staff alike and every slice of cake very quickly sold. An amazing grand total of £143.66 was raised and will go to Macmillan, a charity that supports people and the families of people with cancer.

On Friday evening, and with two less Pentrevean’s (Lena and Amy both went home for the weekend), the usual hour of prep was completed.  After this a number of the girls went up to the sports centre to play badminton whilst the others relaxed and did a little bit of ‘housekeeping’ in preparation for the schools Open Morning the next day.

The girls woke bright and early for an early breakfast in the dining hall. Dressed smartly in their school uniform they reported for duty and although some of the girls were a little daunted by the prospect of showing a family around the school they really enjoyed the experience and did an excellent job!  All of the girls were very proud to give a guided tour of the very tidy boarding house and it was great to see the school buzzing with activity.

The rest of the day was to be free and the girls wandered into town or relaxed around the house. As a reward for their hard work in the morning the girls were treated to a Dominoes’ pizza in the evening.

Miss Hope who naively thought that ordering the pizzas would be a straightforward process was still waiting for topping choices some forty-five minutes later. Having debated and deliberated over every possible topping combination the girls finally made their decisions and the pizzas were ordered. A pineapple and pork meatball (!?!) pizza, unsurprisingly tasted as peculiar as it sounded and Miss Hope was not surprised to see two pieces of this particular pizza left in the box at the end of the evening. Anne, not content with just pizza, was very keen to see a reappearance of the Ben and Jerry’s ice-cream from the previous weekend and, although they tried very hard to finish the six tubs off, there was still quite a bit left again!

On Sunday morning and having missed the usual Saturday lie in most of the girls made the most of the 10 o clock wake up call. For Helena and Anson there was no such luck. Helena left the house for chorister rehearsals and Sunday services at the cathedral and Anson headed off to the Methodist Church for their Sunday morning service.

After brunch, and to make the most of the dry and partly sunny mid-October weather, we joined forces with the senior girls for the main weekend activity, the Flow Rider at Retallack Resort, Wadebridge. As you can see from the pictures below the wetsuit clad girls, along with the braver of the Mulready children, Poppy, had a lot of fun body boarding and stand up surfing…the hot tub was enjoyed and the girls even talked me into a wetsuit for my first experience of Cornwall’s only artificial wave simulator. 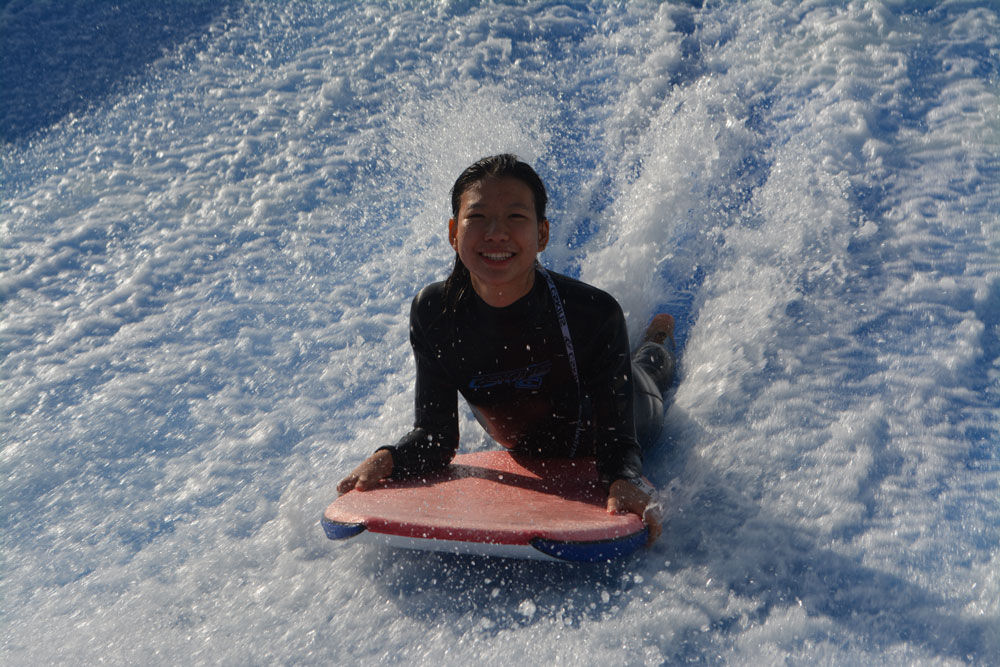 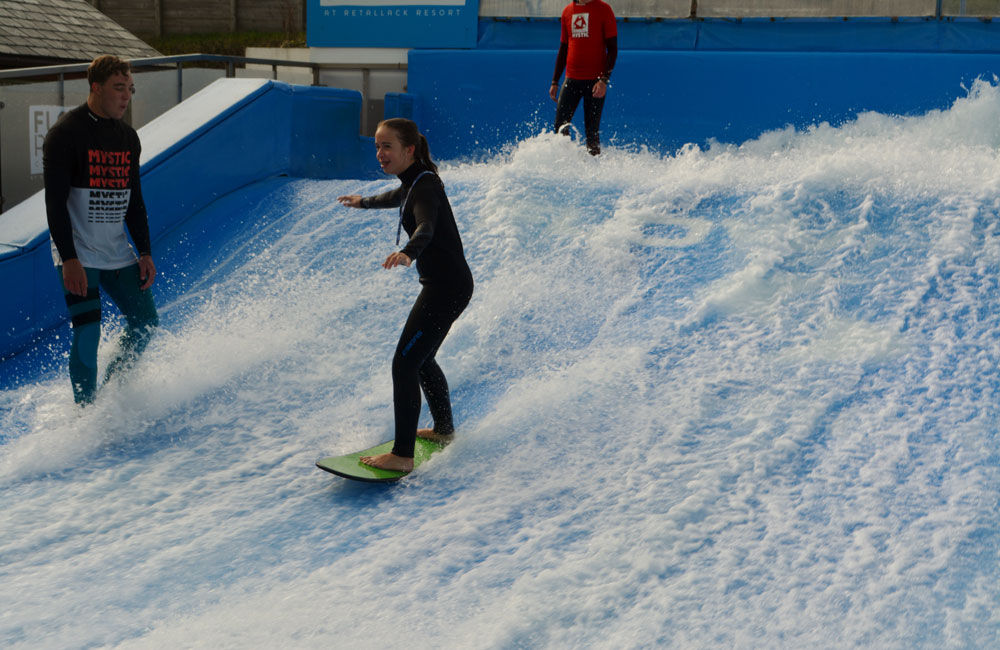 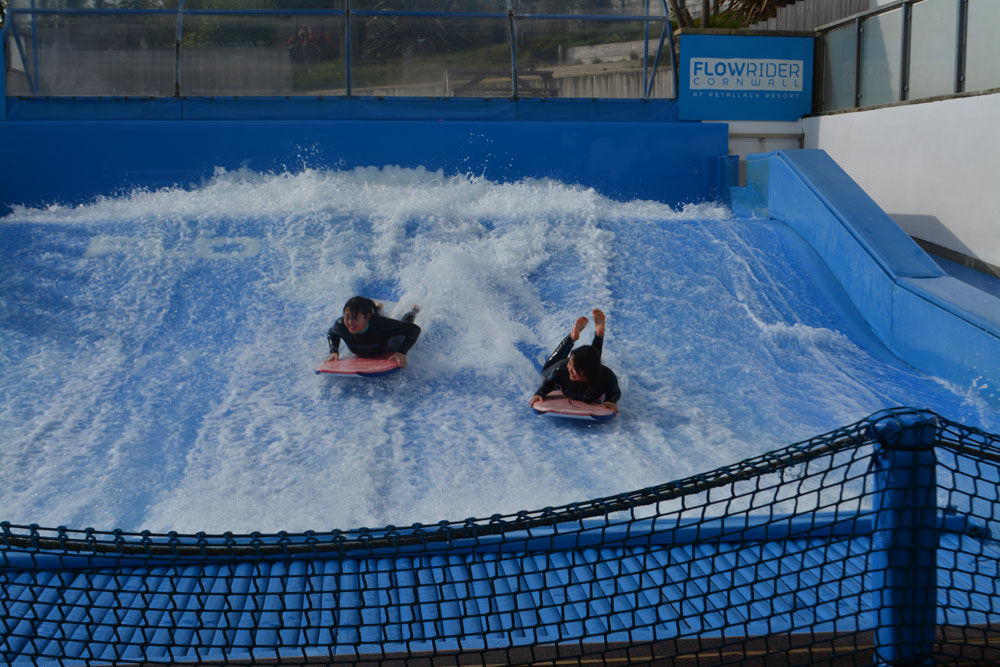 Showers were enjoyed upon arrival back at the house and then it was up to the dining hall for a hearty chicken and leek pasta, trout or vegetarian pizza dinner.

It is now Sunday evening and yet another weekend has flown by. The girls are busy completing some prep and the usual rounds of Sunday evening chores will then commence before earlier bed times in preparation for the week ahead.

With just two weeks of the half term remaining and grade cards just around the corner the girls will be sitting interim tests in a number of subjects this week. For the 1st – 4th years progress grades will be given in every subject and for our 5th years there will be full written reports. The house target of achieving all 1’s and 2’s has been set and I am looking forward to seeing whether the girls have met this. Miss Hope and I will analyse the grades and numbers carefully and set the girls some, more specific, targets to be worked towards in the second half of the autumn term.

Next weekend, the last weekend of the half term, Miss Hope will take the girls to Trenowth Woods, Grampound Road, for a whole boarding community team building and leadership activity day. The girl’s fire making skills will be put to the test, dinner will be cooked on the open fires and the girls will take part in a number of different team building and skill based activities. Make sure you look out for next weekend’s blog for all the details and photos…last year there was even an axe throwing competition!