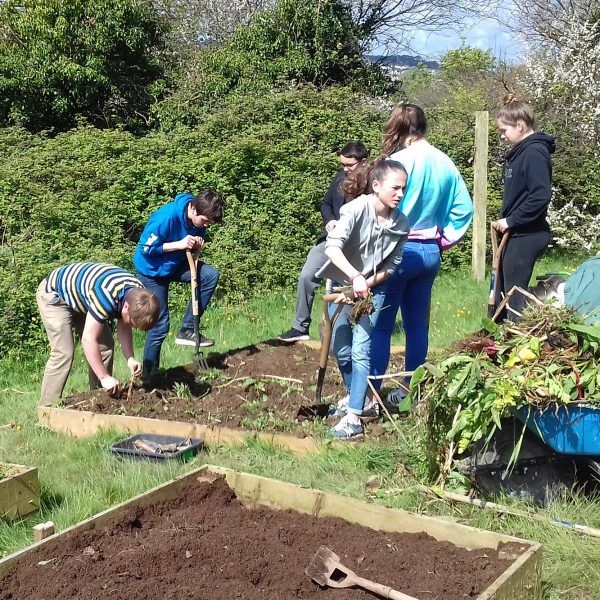 Well, it’s been a really busy week back at school, it certainly doesn’t feel as if the holidays were only a week and a half ago!

!  The girls have been busy trying out for rounders teams, Laure’s been fencing, Lily’s been surfing, Alex has had extra rehearsals for her forthcoming LAMDA exam and Katie’s spent most of the week recording a CD with the cathedral choir.

This weekend has been equally hectic.  On Friday night we all went to support Katie and other friends who were playing in the school’s Jazz concert.  The standard of music played was amazing and we were all in awe of how good the school’s musicians are.

On Saturday morning we all went up to help Mr Baker from the DT weed and prepare the school’s sustainability garden ready for the new growing season.  The girls were all really keen and got stuck in weeding, cleaning raised beds and spreading new compost.  They did far more work than the boys from Poltisco and I was really proud of them!  After all that hard work Lily, Freya, Emma, Laure and Amy spent the afternoon sunbathing in the Pentreve garden and relaxing in the paddling pool Amy had specially requested I buy – after several trips with jugs to fill it!

On Saturday evening, rather than the usual pizzas in front of “Britain’s Got Talent,” we invited Poltisco around for a BBQ in the garden.  Everyone enjoyed the chance to be outside in the evening sunshine instead of indoors due to the rain and there were several games being played as the burgers, hot dogs and pizzas were cooked.

Today we went to Boscowan Park, next to the river where some of the girls joined in a football match with the boys, and everyone seemed to have a go on the adventure playground before having ice creams from the van.