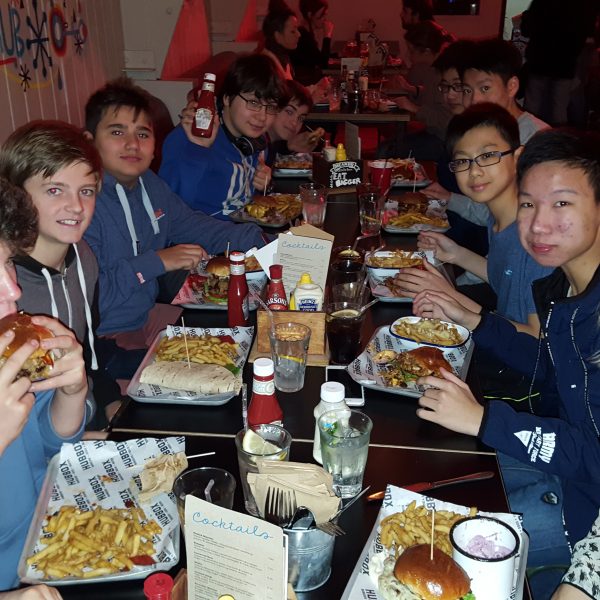 What a lovely weekend the boys have had.

On Friday evening the Poltisco boys were treated to an outing to Truro’s Hub Box. As you can see from the photographs the boys had a really enjoyable time. The service and food were great which really added to the outing.

During Friday evenings the boarders have access to the SBA sports centre. The boarders from both the senior and the junior boys houses enjoy nothing more than a game of basketball. This week the junior team of Bosco, Trevor, Toony and Jack beat the boys from the senior house. They were very pleased when they returned to the house.

On Saturday there was an early start for Harry as he was playing hockey for the school’s Under 15 team at Mount Kelly. James and Nick were also in Hockey action playing Mount Kelly at home. The Under 15’s lost 3-1 whilst the Under 14’s won 2-0.

During the afternoon the boys made the most of the common room and enjoyed watching some Premiership football and rugby. After supper Toony and Bosco requested to go to the senior boys boarding house. The remaining boys stayed in the house for a Saturday favourite movie and pizza night.

Over the past few weeks the boys have had some joint outings with the seniors, with Segway and paintball. This weekend they the boys were asked what they would like to do. They requested an outing on Sunday to the Plazza cinema Truro. Two films were of interest; Fantastic Beasts and Where to find them and The Return of Xander Cage.

After supper the boys returned to the house and cleaned and tidied the common room.