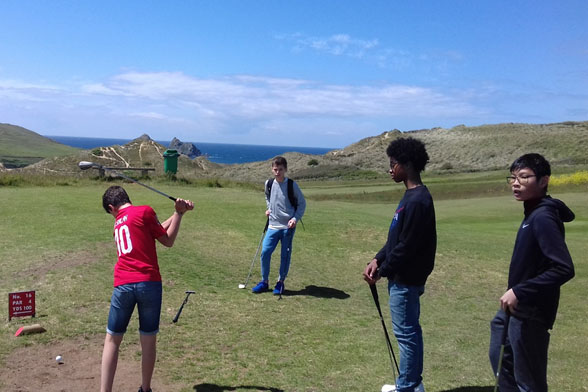 What a relief – exam week has come to an end!

The boys went home or stayed in for a well-deserved and relaxed weekend. They will receive the results of their assessments in the coming ‘feedback’ week. We hope they achieve what they deserve.

This weekend had only a small number of boys in and, understandably, they were keen to get out and to socialise with other houses. As a result, we got out of the house as much as possible, starting on Friday night when, with regular prep-time cancelled, the whole house went up to the SBA sports centre to join some Trennick boys playing basketball. I was not surprised to find out Adrian is a really great shot!

On Saturday, our official activity was to go to Holywell Bay (a National Trust area of significant natural beauty) for a round of Pitch and Put (a downsized version of normal golf) with Trennick. You may remember the boys enjoyed a trip to the driving range earlier in the year – this was our chance to put our lessons into practice. The boys didn’t disappoint, with some really impressive shots played – Urko and Adrian particularly stood out. Here is Roland after he played a particularly good shot – you can see the sea and sand dunes in the background.

The holes got increasingly difficult, until the last hole which involved a massive 50ft drop over a steep slope, which the boys all navigated (some after a couple of attempts and lost balls…). In the evening, we decided we would wander over to Pentreve to join the girls for a film and pizzas.

On Sunday, the boys had some time to entertain themselves – Mathis took the opportunity to go skateboarding with some of the German boys in Trennick – after which I took them into Truro to buy them delicious gelato ice-cream followed by a trip to watch choral evensong at Truro Cathedral, sung by the Cathedral Choir (recent stars of Britain’s Got Talent), including the Girl Choristers, who all attend Truro School, some of whom knew the Poltisco boys quite well. They were pleasantly surprised to see us sitting in the pews and we were treated to some outstanding singing accompanied by the renowned Father Willis organ at its loudest and most exciting. England is fortunate to boast one the finest church choral traditions in the world and Truro sits among the best in the land, so it was a cultural experience not to be missed over the course of the year.