What a busy couple of weeks it has been!

Last weekend the girls took part in another well-being day, which included a yoga session up in the sports centre. Next weekend we will be decorating the house for Christmas and so the girls have also started making some decorations.

On Wednesday evening the girls were happy to forego an evening of prep in order to walk down into the centre of Truro and watch the annual City of Lights parade.  This signals the start of the festive season in the city, paper lanterns made by various schools and organisations are paraded through the streets.  This year the theme was ‘Remembrance.’  Here is the Truro School Angel: 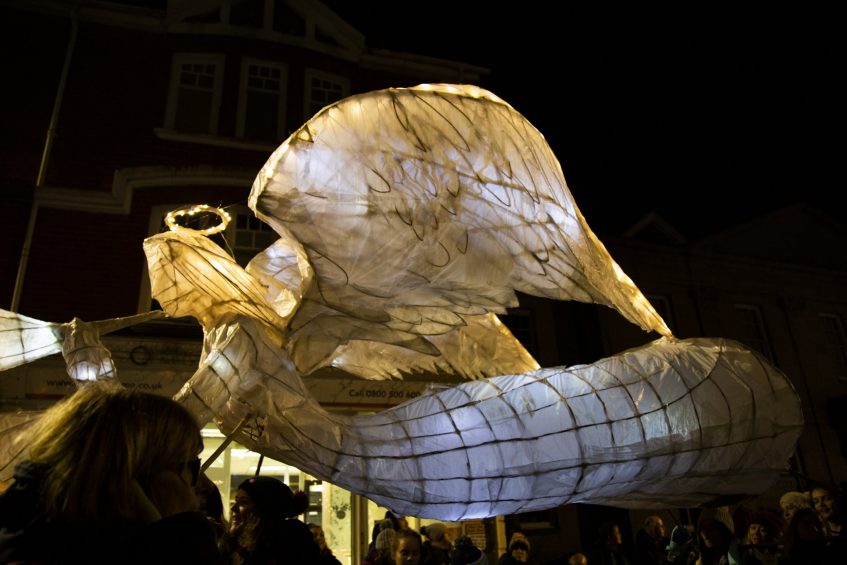 It was a bit cold and wet, but nice to get out and support the talented artists from school who had spent weeks helping to make the Angel.

This week has also seen the school production of West Side Story after more than a year of rehearsals.  Nana, Katie and Bea have had such a busy week: all of last weekend was spent on the final rehearsals, Monday saw the dress and technical rehearsal and then they were in six performances from Tuesday to Saturday!  We all went to support them on Friday evening and were blown away by how good the acting, singing, dancing and playing was!

Bea was a Jet!  Katie kept running away every time I tried to take her photo when she was is costume and Nana had already changed back by the time I found her!

This weekend we have been up in the new cookery school.  Mr Hatfield, as well as being Head of Rugby is a trained chef, and so the girls spent Sunday afternoon making their own pizzas from scratch.  The pressure was on as Freya had revealed earlier in the week she had good experience in this area, and there was, as ever, much debate about the rights and wrongs of pineapple on pizza.

Unfortunately, I didn’t get to try any of the finished products as I went to evensong at the cathedral to see Evie become a full chorister – many congratulations to her!