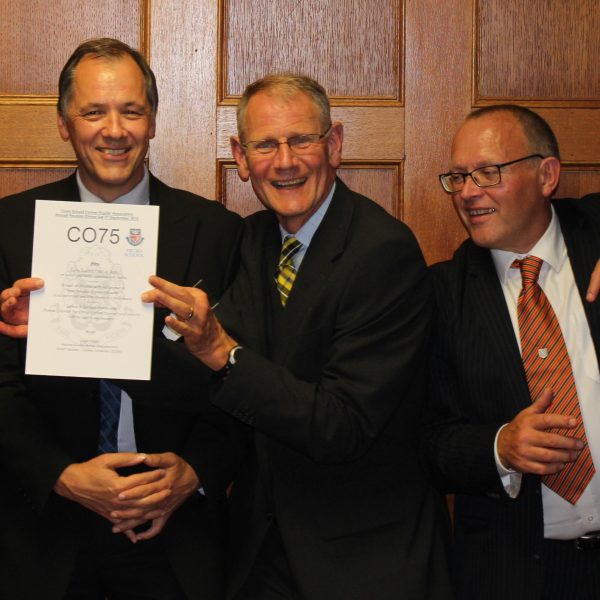 When I started at Truro School, way, way back in 1968, I had no idea just how broad a foundation it was going to give me for my two-part career.

Back in those days we started the First Form (now Year 7) with a total novelty to me, Latin.  Foundational to all sorts of languages, of course, but I didn’t know it then.  But with the teachers we had, lots of subjects just clicked for me: languages, maths, and science.  Come the Third Form, we had an additional choice to make: German or Greek.  Just four of us chose Greek, German seeming, of course, the far more practical choice.  Fourth form, Chemistry squeezed out Latin – as my interests in science continued to expand.

Sixth Form, and I went for the for the fairly standard Sixth Science combination of A-levels, two sciences and Maths.  Although already starting to focus more on Chemistry, those two years mark where chemistry clicked even more emphatically for me, fuelled by lessons I still remember from teachers like Gerry Pester and “Flash” Edwards, and particularly Jim Clark, more recently from Cambridge, and introducing the expanding field of organic chemistry.

So with loads of support all round from the teaching staff, I stayed on after A-levels to sit the Cambridge extrance / scholarship exam.  Extra help from Messrs Collinge, Monks and Scales, and probably others.  And it was a bumper year, half a dozen or more of us getting to Oxbridge, and I was fortunate enough to get a scholarship at Downing College, Cambridge, where Truro School had something of a long-standing association, to read Natural Sciences.

Without a doubt, the extra tuition I had received in those extra months at school stood me in exceptionally good stead, and I ended up with a First in Chemistry, picking up a bit of Biochemistry on the way (and schoolboy Greek and Latin helping no end with all the funny terminology!).

But yes, I did also have a life outside school, and that took a significant turn in 1972, just as I was entering the Fifth Form.  Phil Orchard, another “old boy” on the daily train ride from Redruth to Truro, invited me along to his church.  Although thinking up until that time that I was getting on very well without a whole lot of reference to God, I was gripped by what I heard – it certainly seemed for the first time – and within a few months convinced.  Converted, actually.  Science and religion still do not conflict, in my book, though I think I understand them both quite a bit better, 40 and more years on.

That mental and life-style about-turn in 1972 has also been highly significant in my subsequent life, in several key ways.  First of all, I met the woman who has now been my wife for 38 years, when we were both teenagers at that church.  Jenny and I married after my first degree, and I then returned to Cambridge as a post-graduate student – three more years chemistry leading to a Ph.D. in organometallic chemistry.

That faith was (and still is) something important to us, and we wondered at the time whether life-long Chemistry, though a fascinating prospect, was going to be my career path.  We thought, though, that since the country had invested six years of funding to my higher education (this was back in the days of grants, rather than student loans, remember!), it would be fair to pay taxes for at least the same length of time, before, perhaps, cutting and running into any different, more faith-based, employment.

Those six years, though, turned into twenty-two.  I started work as a “medicinal chemist” (i.e., designing and synthesising new potential medicines) with Beecham Pharmaceuticals, down the M11 in Harlow.  In the next few years, we had the stereotypical two children (though no 0.4 of an extra child, nor a dog) – and, given our then location, I remain sensitive to the “Essex girl” phrase to this day.  Beechams after a few years became SmithKline Beecham, and finally GlaxoSmithKline.  And I was really happy working in the labs, actually doing chemistry, for most of those years.  I still find it amazing to reckon that I probably made, during that part of my life, a thousand chemical compounds that had never been made before.  That is quite a strange privilege, I think, even as I look back now having not donned a labcoat for over a decade.

Back in 2000, though, those musings Jenny and I had had earlier about a career change surfaced again.  The church we had been members of throughout our time in Harlow, and where I had become one of the leadership team, suddenly found itself in need of some further leadership input – a part-time job, actually.  And at precisely the same time a possibility arose within GSK for part-time working.  It was more probably designed, I would have thought, to maybe help women back into work after a baby, so I was really very surprised when I applied and was offered the part-time position.

So for five years I was juggling these two part-time roles, research chemist and church leader.  And suddenly, Truro School Greek from three decades earlier comes into play again: much of that leadership role with the church involves teaching the Bible, and the New Testament was originally written in (relatively simple, compared with my O-level in the Classical stuff) Greek.  The languages background, all the way back to mensa, mensa, mensam in the First Form, has even helped me to pick up a bit of Hebrew, for the Old Testament.  Little did I realise all those years earlier how those languages would be of such use to me.  Thank you, Roger Dunbar, Jock Marshall, and Russ Barber!

But Harlow is still a long way from Cornwall, and our parents were still there, and running into some health problems.  In 2003 our son was at Uni, and our daughter was soon to follow.  And within a couple of days of each other, totally out of the blue, we had two independent contacts from two different churches “back home”: would we be interested in coming to work with them?  More than just coincidence, I think I’d say.

And so, at the beginning of 2005, there we were, back in Cornwall – still even with a Redruth post-code, though the church for which I now work, Tuckingmill Baptist Church (www.tuckingmillbaptist.org.uk), is in Camborne.  It’s not a big outfit at all.  The people dig deep to financially support my position with them.  No more lab coats, but no clerical vestments (thank goodness!) in that kind of church tradition, either.  A totally different working week, with an obvious focus on (and deadline of) meetings I’m responsible for every Sunday, instead of research projects which could last for months or even years.  People of widely different backgrounds and abilities to teach and care for, and certainly not limited to office (or lab) hours.  Some totally new opportunities to serve in the local schools, doing assemblies, as a governor, and as a chaplain.  Despite the regularity of the seven-day cycle, no two weeks are ever the same!

And nice to be back in touch with the alma mater, too, after all these years.  Loved the Class of 75 reunion dinner a couple of years back, meeting up with some of the lads, and even some of the staff, of four decades ago.  And – even though we do still occasionally sing at church, “this world is not my home, I’m just a-passing through” – great to be back in Cornwall, too.