John Stobart (CO73) 'From Treliske to The Frankfurt Radio Symphony'

My musical career started at Treliske as it was then called. I can’t remember the year, but we were asked if we wanted to play instruments and I was given the Tuba because I was the tallest in the class! I think it was Probably Mr. Moore who taught us at Treliske as he was later to do at the main school. I don’t know how he stood all of us untalented kids squawking into our various tubes. He sang loudly to drown us out and give us an impression as to what we should have been playing and he was always full of enthusiasm for the band.

Later, when I was about 14 or 15, I got the chance to play the Tuba with the County Youth Orchestra, I could never understand why. I wasn’t by any means the best tuba player in Cornwall, but the others didn’t seem to have been interested in orchestra. I was, and perhaps even more interesting to me was the prospect of being around girls. Nobody growing up now can imagine how starved of female company we were – and I grew up on a farm miles from the nearest village with 5 brothers. 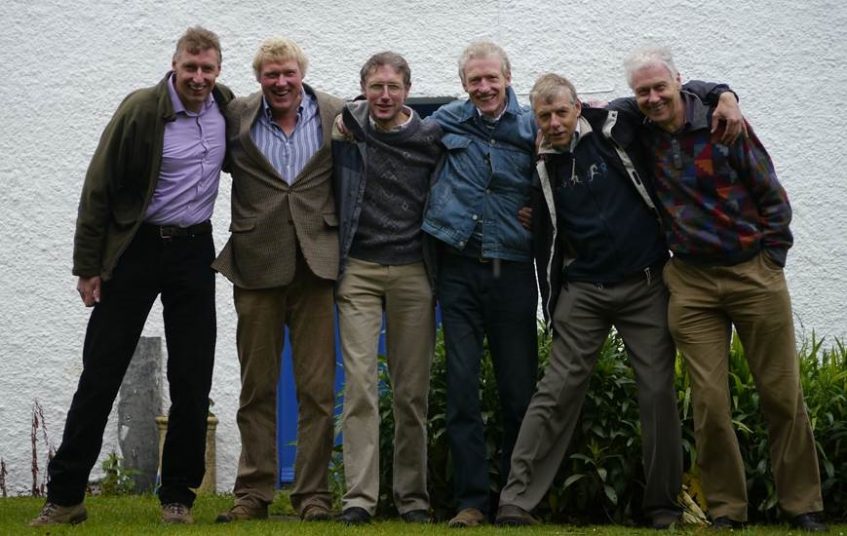 Anyway, through the orchestra I had the opportunity not only to observe the female phenomenon, but also to hear a wonderful young horn player. Even now I remember he was called Jason and I fell in love with the sound of the horn inspired by his playing. As soon as I had done my O Levels, my parents fulfilled my greatest wish (supported financially by the Radcliff Trust) and I received a horn – and even more important, a teacher, because in Cornwall in those days, French Horn players were very scarce on the ground.

I was extremely fortunate. One of our coaches in the youth orchestra found Charles Gregory. He had played in the London Philharmonic Orchestra during the war and had got so sick of playing Tchaikovsky’s 5th, he had given up playing the horn and teaching at the Royal Academy and bought a hotel in Cornwall. In the meantime, he was retired and after a little persuasion agreed to teach me- a real break considering how late I had started the instrument!

After A Levels (English, French and fortunately German), I won a place to study at the Royal College of Music in London. This was a fantastic time, being let loose to practice as much as I wanted, going to the opera and the Festival Hall at reduced student rates and learning so much from my teachers and peers. I started off with a very pragmatic teacher, Douglas Moore, who had played in the BBC Symphony and who played scales with us to keep his lip in and to train our intonation. Later I changed to a teacher who was then just starting at the Royal College, Julian Baker, in the meantime one of Britain’s finest horn teachers. He was a great inspiration and I could hear him play when I went to Covent Garden. I found seats that were terribly cheap because you could scarcely see the stage – but you could hear. These days, all you need to do is go on YouTube and you can see and hear the world. I successfully won my ARCM at the end of two years and had to find a way to earn a living. In the meantime I was married and my then wife won a position in the BBC Scottish Orchestra. We went to Glasgow and I freelanced with the various Scottish orchestras. After a year or so, the cultural climate cooled and the opera could only afford to put on operas with one horn. I considered giving up as work prospects looked very bad. In rode to be sure, I auditioned for the Berlin Philharmonic. I was sure they would give me a straight answer without all the famed English politeness. They did, I was runner-up. The next time an opening cropped up in Berlin, I auditioned again and was again runner-up, but this time they offered me a scholarship at the newly founded Karajan Akademie. So I played with the orchestra and took lessons from their principal horn, Gerd Seifert. (Fortunately I’d had German lessons at Truro School with Mr Worsley-White and Mr. Wilkes.)

This was again for me a Golden Time. I played under legends (Karajan, Böhm, Abado, Jochem, Osawa to name a few), played chamber music with people from all over the world, played gigs that took me to Vienna for weeks at a time and eating in Berlin and the social life there were also eye-openers.

Eventually the time came to get on the audition circuit to try and find a job. I was unlucky auditioning for several jobs I had really wanted and then arrived in Frankfurt to audition for an orchestra I’d never heard of. The city was grey and ugly. The allies had done an excellent job at destroying it and what had been thrown up in the 50’s was functional but not aesthetic. I didn’t really care about winning the audition because the city was so unappealing.

For those who don’t know how an audition in Germany works, all the candidates are cooped into rooms together to warm up. An order is ascertained by lot and then the candidates go into the hall (if you’re lucky, it can be a little room with no acoustic!) and all play the same piece (probably the first movement of a concerto by Mozart). When everybody has played, the members of the orchestra (unlike in GB, in Germany most of the orchestra are required to attend) ascertain whether there are any candidates who are good enough for the job and if there are more than one, a second round ensues. In this round the candidate generally has a little more choice as to what he can play. Normally a third round with orchestral excerpts decides the candidates’ fate. As you can understand, this is a very stressful procedure for the candidates and (because they have to hear the same works again and again) very boring for the orchestral members unless someone really inspires – and (s)he will get the job!

Anyway for me the stress was lightened through not caring so much about Frankfurt and I won the job.

After a year’s trial period, I was a member of the Frankfurt Radio Symphony Orchestra and I was astounded that such a good orchestra was so unknown. It didn’t stay that way. Nor did Frankfurt.

Frankfurt has become a great place to live. They have torn down most of the buildings from the 50’s and put up either impressive skyscrapers or buildings that look like those that were there before the war. The city has an international flair unlike any other German city because of the vast number of international banks.

The city is full of trees and the public transport system has grown apace since I moved here.

Our orchestra has also changed. The time I started was the beginning of a rejuvenation. The players who had survived the war were gradually pensioned off and newer and better colleagues joined our management and chief conductor put us on the international map with recordings and tours. (With my first, I got to know all the fantastic halls in the North of England). These days we have our own YouTube channel and the rejuvenation process is repeating itself and even better colleagues are joining us.

I had the good fortune to be involved in prize-winning recordings of all the Mahler, Bruckner and Berlioz symphonic works and the tours to Japan and elsewhere that stemmed from them aside from all the other recordings we make on a day-to-day basis as a radio orchestra.

With the brass-players around Reinhold Friedrich we formed “hr brass” and roamed Germany and abroad and made many recordings.

My great love is however chamber music, and I have played I think all the works I ever wanted to play, discovered others in libraries and other collections and put them back on the stage and of course commissioned works. We have to play a lot of “modern music” and it’s not all to my taste, but when I like the music of a composer, I try to commission something if it’s within my budget.

So now I’m the longest serving member of the orchestra. It goes from strength to strength and I am looking forward to a time very soon without the stress of performances and when I can choose where I spend my time. I’m sure I will be involved in some way with music. It’s my life, and it started at Treliske.