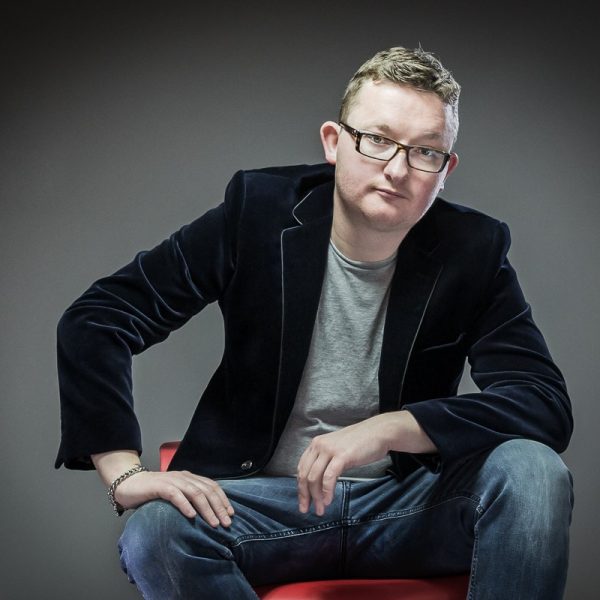 “Choose a job you love and you’ll never work a day in your life.” I can’t really argue with that. I never envisaged having the kind of job that would entail the usual 9-5, 5-days-a-week routine; at the same time, I never really anticipated carving out a career such as it is today. The very nature of being a professional musician almost always results in a portfolio career, or so I learned during my time at the Royal College of Music; an institution where I spent the best part of a decade.

Music, and moreover composition, has always played a large part in Philip’s life. He told us that he remembers spending almost every break time at Truro School secreted away in what was then the Sisbelius Suite, eeking out every last minute working on some piece or other. He told us:

I was often late back to class, usually arriving to a fairly justified remonstration from the teacher. One certain such remark was along the lines of “if you keep frittering away your time doing music you’ll get nowhere”. To this day, the irony is not lost. But, music was my life then as it is now. I think I was the Games department’s biggest disappointment – physically I was quite heavy-set and just the right size for a prop, but lacking any ability in this area whatsoever.

On leaving Truro School Philip went straight to Bristol University and spent 3 happy years completing his undergraduate degree in Music. Two things became clear during this time; the first was that academia was something he wanted to pursue, and secondly that Music was the thing to which he wanted to devote his professional life. Philip remembers he had originally discounted Music from his GCSE subjects assuming, most wrongly, that his prospects would improve somewhat if he took RE instead. This was an error rectified not 5 weeks into the Autumn Term of 4th Form, with Mr Spedding kindly letting Philip join his class.

Philip took a year out after his degree and moved home. He spent his time working at City Music in Truro demonstrating and selling pianos. Meanwhile he had applied for further study at the Royal College of Music and was fortunate enough to be awarded several scholarships by the college itself, and by the PRS foundation for new music. Within a couple of days of being at college Philip met for the first time a professor who looked slightly familiar. As they were chatting in the lift they discovered they had a mutual connection in Mr Latarche – it was his Sister, Vanessa who had just taken up her new post of Head of Keyboard at the RCM. Philip told us:

for me, Mr Latarche was one of those rare breeds of teachers who made such an indelible impact on my life. I owe him a great debt for instilling within me the confidence to make music my profession. I could go on, but I know that for many others who may be reading this they share with me a huge amount of respect and admiration for Mr Latarche. For many years, he was my piano teacher and he would often regale stories of his Sister’s approach to practise – finally, I got to put a face to a name!

Philip began his doctoral research in 2008. His thesis was originally based around symphonic music, and attempting to discover what makes a Symphony different from other musical forms and genres. Over time this idea developed and morphed into “Developing an approach to large-scale musical composition”. He spent six years on this project, composing countless hours of music – a great deal of which never made it into his final submission. Philip said:

I was fortunate to receive an RCM Director’s Award for my work. Throughout this period a number of opportunities arose working with professional orchestras and musicians. Philip won the RCM Concerto Competition for Composers with his orchestral piece, Diurne, which subsequently was shortlisted for the Alexander Zemlinsky International Composition Competition.

The following year Philip was commissioned to write an Opera for a tour around the UK. Bare was composed in collaboration with playwright, Natasha Collie and played at the Edinburgh Festival, The Sage – Gateshead, and The Rose Theatre – London. This led directly to another commission for a vocal piece with orchestra which received its premiere in St Petersburg as part of a cultural exchange programme between Russia and the UK.

I was asked by a number of the musicians involved to write solo music for them to include in their individual recital repertoire. Krysia Osostowich, a professor at the Guildhall School of Music and Drama approached me having heard one of these solo pieces. Together with her recital partner, pianist Daniel Tong, she was planning a nationwide tour of the Beethoven Violin Sonatas. Each sonata would be paired with a new commission, and I was asked to write one.

Air has now been performed at several venues up and down the country, including St Georges Brandon Hill – an old haunt of Philip’s from his Bristol days, and coincidentally the venue of one of his very first premieres. The whole cycle of sonatas and new commissions is currently in the process of being recorded and will be released, hopefully, next year.

In 2015 Philip was commissioned his second opera by the International Opera Theatre of Philadephia. This US-based organisation mounts a festival every year in Citta della Pieve, just outside Perugia in Italy. They produce operas, sung in Italian based on Shakespeare plays. Philip was asked to write a work based on the Comedy of Errors to a libretto composed by Antonio Fava, himself a renowned Maestro of the Commedia dell’Arte. Errori! is set for another run in the US in the not too distant future.

Over the past season Philip has been fortunate enough to be a participant with the Royal Scottish National Orchestra’s Composers’ Hub Scheme. This project appoints five composers to work with the orchestra on a number of projects. Philip said:

I have had the opportunity to write two pieces for the orchestra which culminated in Unmade – a work that attempts to deal with the literal ‘unmaking’ of soldiers during the First World War. I have since been commissioned to write a piece for String Orchestra for members of the RSNO, and I’m currently working on this in preparation for its premiere this autumn.

Meanwhile Philip is still active as a teacher, and has been recently appointed Head of Music at Connaught House School in Marble Arch from September.Philip has many strings to his bow and in addition to his composing and teaching work he has been engaged as an external advisor to Chichester University, working with their music department in planning joint honours degrees for undergraduates. He also works with the Open University as a research consultant on their Listening Experience Database project, a collaboration with the RCM and is also regularly commissioned to write programme notes for concerts nationwide, most recently for events at the Albert Hall, the Barbican Centre, The Royal Festival Hall, and for pianist Lang Lang at the Leeds International Piano Competition.

An unconventional career, so far, to say the least. However much as I may have developed as a musician since leaving Truro School in 2001, I could not have hoped to enjoy the kind of career I do now without the skills that Truro School so ably afforded me. I thoroughly enjoyed my time at the school, and owe a great debt.