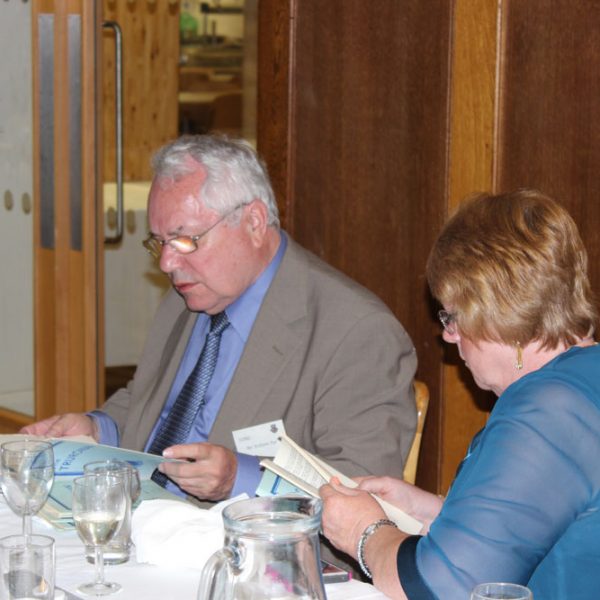 Mr William (Bill) Pye (CO62), now lives in Boston, Massachusetts following a successful engineering career that took him to the USA. However, he made the journey back to Cornwall for Truro Schools Former Pupils Decennial Dinner. Here he explains how much the school has changed since he was a student here.

This was the first reunion I have ever attended at Truro School, although many years ago we drove around the campus with my wife and two young children.  This visit was better, since we actually had a guide showing us all the changes that have happened at the school.

The reunion dinner actually fell on the day of my birthday and it provided to be a fantastic evening. The company at the senior table was delightful, especially as we met a former Old Boy who remembered me as one of his prefects. It was also a pleasure to meet Mr. Jackson, my former Zoology master. He must have been 21 when he started at the school!  It was nice to see the school again with all its new developments, especially a covered swimming pool, which in my day was open aired and as cold as ice water!

My career as an air traffic controller and an engineer in the UK led to a career in the USA as an engineer.  As a result, I travelled to many countries throughout my career until retirement in 2012.

Some interesting memories I recall were morning assembly/services on the quadrangle when the chapel was closed for repairs.  The annual dormitory play festival and school plays held in the chapel before the closing, were always good fun.  I also managed to escape for weekend hikes as I was working for my Queen Scout badge.  The kitchen provided supplies for food for the weekends, which was a treat.

Our life at school was pretty full as we had lots of sports and activities where we could be involved.  I remember with fondness, many of our masters:  Mr. James, Mr. Aldwinkle, Mr. Scales, Mr. Way, and many others.  One prank we played was responding to Mr. Worthington’s comment that one of my peers who had fallen asleep in math class might just as well have his bed in class.  We brought one in the next day, much to the amusement of Mr. Worthington, with the comment, “don’t do it again!”

I am sure you realize in my day that it was all boys, so no distractions!  In my years at school, there were three sets of three brothers: the Harvey’s, the James’s, and the Pye’s, all in the same respective years.

Truro itself seems to be much the same; although I had trouble locating St. Mary’s Methodist Chapel as it has now changed its name to Truro Methodist.  We enjoyed looking in the cathedral and were pleased to learn that the girls’ were singing on the following Sunday, so we attended and enjoyed the service.

Finally, it is strange that the school is now hidden by the trees from the town.  We could always hear the school bell so we knew we had to get back for tea.

We live in Boston, MA, so it is a relatively easy trip to get to England.  The roads to Truro are much better than they used to be.  We managed to combine the reunion with visiting our family and good friends.